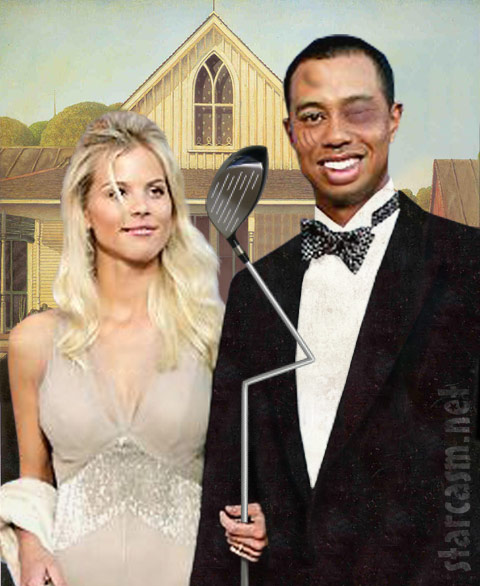 In the interests of balance and gender equality, it’s only right that I reproduce my letter to Tiger’s ex-wife Elin Nordegren. After this, I will never mention Tiger Woods or his family ever again, I swear.

First, let me offer my condolences on your recent divorce. Second, let me offer you my downstairs bedroom. I’m not sure if you have a place lined up now that you’re no longer Mrs Tiger Woods and I would hate to think of you and the children roaming the streets at night with all your possessions in a shopping trolley.

If you are interested in my offer, it would only be fair if you put some of your nannying skills to use. I have a problem child that needs looking after. Don’t worry. He’s almost 20 and you won’t have to bath him or anything like that. Unless, of course, you’re willing to do “extras”, in which case I have a few requests of my own.

You’re easy on the eye and having you around would be no trouble at all. Brenda might be a little uneasy at first, but between the three of us I’m sure we can work out an amicable solution. If you know what I mean.

I hear you have made the cover of People magazine after agreeing to speak to them about your horrific ordeal with that golf-playing sex fiend. Well done. It’s the last quality magazine left in a world awash with sensationalist rubbish.

I hope they are paying you well for your story. After all, your divorce settlement of $100-million or so won’t last forever. As you said in your interview, you won’t have to work initially. Out here in South Africa, we have people who are down to their last million. It’s too sad for words. Still, as Groucho Marx said, the poor will always be with us.

I am pleased to see you are sticking to your story that you had no idea Tiger was hitting the sweet spot every time your back was turned. Perhaps your sixth sense was blunted from the overpowering smell of money that must have pervaded your home.

Some people say that Tiger strayed after your libido became trapped in pack ice. What nonsense. You’re Swedish, for heaven’s sake. You people die without sex.

I see you’re also sticking to your story about not having attacked Tiger on that terrible Thanksgiving evening. Smart move, babe. Why run the risk of coming across as a psychotic Viking running across the lawn in your nightie screeching in a foreign tongue and failing a 9 iron above your head? The last thing you want at this stage is to lose public support. Tiger crashed his car after succumbing to a bout of the yips. It happens to golfers everywhere, usually after they have spent a few hours at the 19th hole. Or a few hours in 19 holes. I’m sorry. I don’t mean to reopen old wounds.

Anyway. I’m just glad that you got out in time and didn’t end up like Nicole Simpson. I am not for one minute suggesting that Tiger would eventually have done an OJ on you, but you know what they say about black men who marry white women – they go mad after a while.

A word of advice: take some of that money and buy yourself a new man – one who isn’t obsessively preoccupied with his willy. There aren’t many of them out there, to be sure, but if you look hard enough and offer the right kind of money, I’m sure you will find one. It would help if you’re no longer suffering from jungle fever.

Now that you have given People magazine an exclusive interview, I hope you will consider a centrespread for Hustler. Both are equally reputable publications and your celebrity status will be given a huge boost. As will my testosterone levels. I’ll get the downstairs room ready in the meantime.

As they say in Sweden, lycka till!

One thought on “How not to score a birdie”