Dear Comrade Grace,
Congratulations on achieving what nobody else has been able to in 37 years – get Robert Mugabe to stand down. This is especially remarkable at a time when it was becoming increasingly difficult to get him to stand up.
Looking back, it might have been a tiny miscalculation on your part to get your husband to fire vice president Emmerson Mnangagwa. Who would’ve thought a war veteran with strong military ties would have had the army in his corner? I’m no political strategist, but it seems to me that you might have moved a little quicker with your plan. If Bob had abdicated last week and installed you as president, you could have had your defence force rounded up and jailed by now. You could have borrowed our army to imprison your army. We’re not using ours at the moment. Give our soldiers a mutton curry pie and a Coke and they’ll do anything.
I was astounded that half a dozen armoured personnel carriers could simply drive into Harare and instantly put an end to life as you know it. Is it possible that Bob himself was behind the coup-that’s-not-really-a-coup? I read somewhere that you had started beating him. I always assumed he enjoyed it. Perhaps he only said he did to keep you happy. Some husbands are like that.
When President Zuma called for calm and restraint, do you think he was talking directly to you? After the awkwardness of having South Africa captured by an overweight immigrant family from Uttar Pradesh, the last thing the region needed, as the Zimbabwean army gently eased the passage of the new national democratic project, was to have you burst from state house shrieking and swinging a nine-plug extension cable at anything that moved.
I believe Zuma is sending his state security minister, Bongani Bongo, to have a chat with Bob and the new boys. Try to get in with Bongo. He’s a good man to have on your side. His predecessor loved massages. You must have all manner of oils and unguents lying about the palace. Bob doesn’t get to look like that without lashings of intensive skin care. Roll up your sleeves and give Bongo a bit of a rub. You don’t even have to pretend to enjoy it. Talk about espionage when you’re doing it. He likes that. Slap him around a bit. We’d like that.
Apparently Zuma spoke to Bobbles this morning. He said he was fine. Or fired. Or on fire. It was a bad line. I don’t suppose his health matters much to you any longer. What a tremendous weight off your mind, let alone your hips. It couldn’t have been easy being married to a 138-year-old man. Does he still wake up in the middle of the night and order Winston Churchill to be shot?
I hear you’ve, er, gone off for a bit of a holiday. You certainly deserve a break. One minute you’re shaking your booty to a North Korean marching song on ZBC while picking out an outfit for your inauguration and the next you’re in the boot of a loyal lackey’s car racing for the Vic Falls border.
Apparently you have a farm in the south of Namibia. You’ll love it there. Okay, Keetmanshoop isn’t exactly Singapore in terms of shopping and health care, but there are a lot of bottle stores and, well, that’s about it.
Do your two gorgeous boys realise they’re going to have to get real jobs now? Poor little things. They must be devastated. Still and all. Keetmanshoop is a far healthier environment for Robert Jr and Bellarmine than, say, Chikurubi Prison. Try to interest them in sheep farming. It’s better than alcoholism. Not really, but don’t tell them that.
Anyway. Don’t let the fire go out of those crazy black eyes of yours. I’m a big fan. Not big enough for you to come and live with me, I should point out. I am partial to the mad ones, but, Grace, you’re next level and I’m just not ready for that right now.
Pamberi ne chimurenga! Pameberi ne karakul farming! 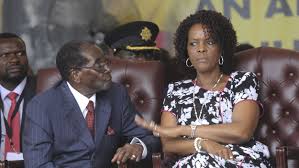