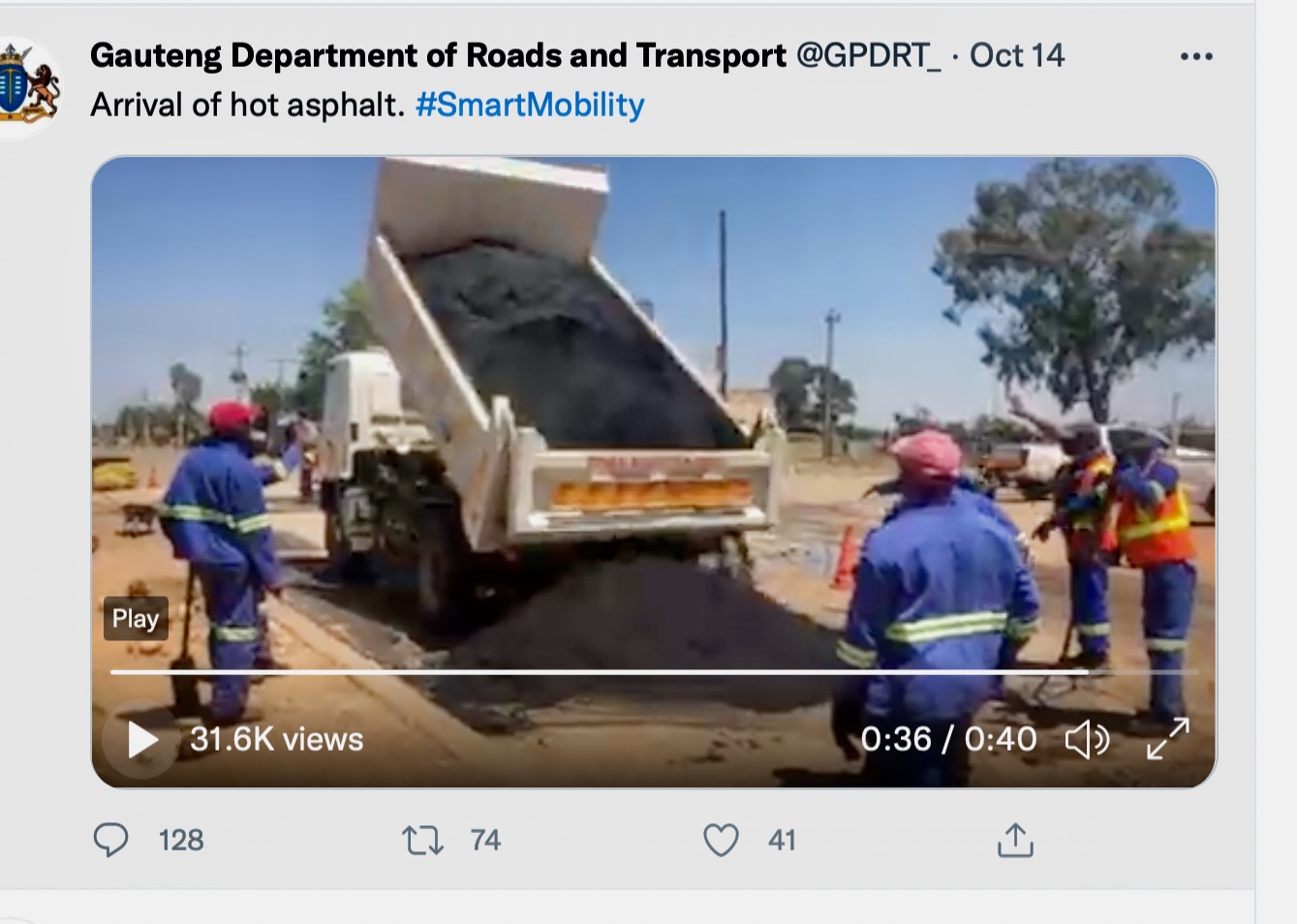 A few days ago I watched a 40-second video posted on Twitter by the Gauteng Department of Roads and Transport. It was titled, “Arrival of hot asphalt.” It came with the hashtag, #SmartMobility and featured workers watching a truck back up to a gigantic pothole. It then dumped a load of tar into the pothole. Now and again one of the crew would raise a hand as if sending some sort of signal to the driver. Probably to hurry up because third tea break had already started. The thud of a jackhammer, or maybe automatic gunfire, can be heard in the background.

The last time this country saw anything near Smart Mobility was five years ago when the Guptas slithered aboard their private jet under cover of darkness and took off for Dubai, narrowly avoiding arrest by several months.

The Hot Asphalt clip had been viewed 31 600 times by today. That’s roughly the same number of people who tuned in to Mzwanele Manyi’s ANN7 to watch the 8pm news. Judging by the comments section, the government’s wool-pulling days are over. It gladdened my heart to see the avalanche of scorn, derision and sarcasm that was dumped on their shameless heads.

The department’s Twitter bio reads, “A modern integrated, efficient, sustainable transport and road infrastructure system in Gauteng.” It’s hard to say if this is a wish-list or a nostalgic look back at pre-ANC times.

Later they posted another dramatic clip, this time of a man with a watering can dribbling black liquid into another pothole. This only got 331 views, presumably because there was no truck involved. The caption read, “Road maintenance can come in a number of forms, but ultimately the end goal is to keep the road as similar to its original state as possible.” Oh, right. That explains everything. Our roads were originally dirt tracks rutted by ox wagons driven hard and fast by Trekboers off their faces on high-octane mampoer.

There’s a chance all this work is being done to celebrate Transport Month and isn’t connected to elections in 12 days’ time, but you’d have to be an ANC supporter or an idiot to believe this. Some might say there’s little difference.

The national transport department, headed by a minister so utterly out of his depth that he should carry a snorkel, is also on a mission. They recently posted a graphic so chaotic and jarring that it could trigger epilepsy among more sensitive designers. We are informed that “Transport Minister Mbalula and Deputy Minister Chikunga (who?) to visit the King Cetshwayo District Municipality (where?). Members of the media are invited.” The visit was scheduled for 9.30am. To get local hacks out at that godless hour, you’d have to offer a lot more than free snacks and a photo op.

The department also announced that “SANRAL currently has a total of 23 packages along the N3 which are a priority along Durban to Pietermaritzburg for fixation.” Packages of Durban Poison? That might get the reporters out. Fixation, as Fikile knows, is a concept originated by Sigmund Freud to denote the persistence of anachronistic sexual traits. I’m not sure how this relates to transport, but I’m definitely interested. Bypass curious, as it were.

But it’s not only Transport doing everything they can, one tweet at a time, to help repair the damage done to the country by the ANC.

Gauteng Health last week tweeted “a few healthy snack ideas” which included a medium-sized banana and frozen baby peas for older children. Do they think we’re all millionaires that we can just dish out frozen peas whenever the mood takes us? Besides, older children want crystal meth and untraceable handguns.

The SA National Defence Force expressed its “pleasure” to host one of the “biggest event in the Southern Gauteng”. I was expecting to see weapons of mass destruction on display. But no, they were launching the Beauty Hub Academy at the Lenasia army base, where unemployed youth would be taught hairdressing and beauty therapy skills. At that age, I was given a gun and sent to the border to kill strangers. I would have preferred hairdressing.

Meanwhile, the SA Police Service announced that Minister Bheki Cele would officially open the Daggakraal police station. I feel so much safer now. Also, the landline at Cradock police station is out of order. Don’t bother calling when it’s not out of order, either.

Anyway, right now state Twitter is an echo chamber of departments retweeting their ministers and vice versa in the belief that this makes them look busier than they are. Only a moron would fall for that. And if there’s one thing this country has in abundance, it’s morons. The election results will prove me right. This suits the government. If it didn’t, the education ministry would also be pretending to care.