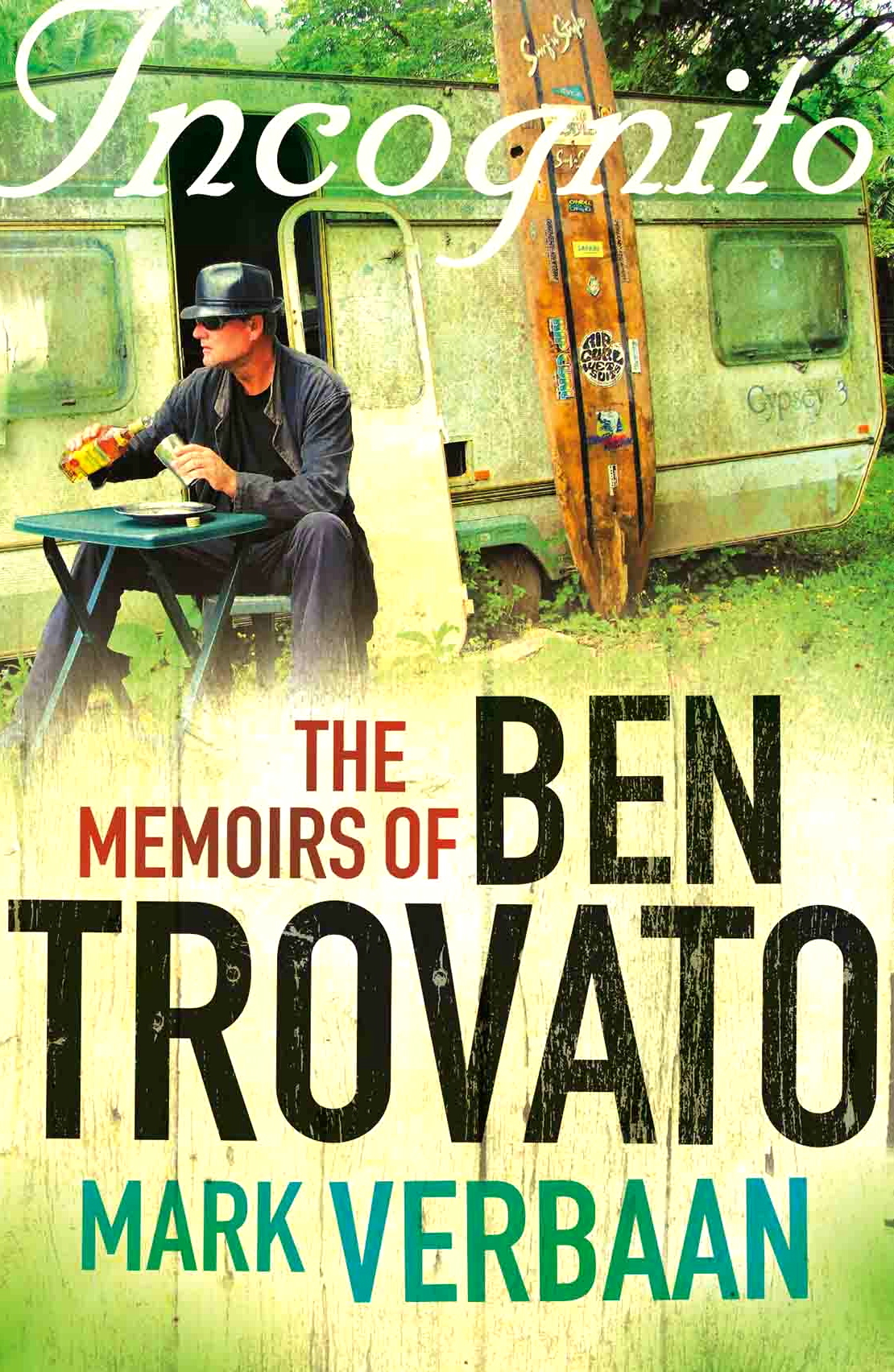 There is a good chance there are still people out there holding powerful grudges against me for something I wrote that mocked their language, religion, race, political beliefs, sexuality, body type or social status. I don’t par­ticularly want to be explaining the nuances of irony, parody and satire through a mouthful of blood and broken teeth, but it’s a risk I am prepared to take.

The publisher of my first book hired students to walk around Cape Town and Johannesburg wearing sandwich boards asking, ‘Who is Ben Trovato?’ It was a question that reverberated around the world. I am now drunk enough to answer it.

An excerpt from Incognito – The Memoirs of Ben Trovato

It seemed like a good idea to get out of town for a few days. Dudley got his hands on a bag of magic mushrooms and we set sail for a game lodge owned by friends outside Otjiwarongo, a few hours north of Windhoek.

When we got there we drove into the bush to regain our equilibrium with a couple of shots of warm whisky. We came across a tiny grass hut a few metres off the dirt track. It was abandoned and looked like a good place to get out of the merciless sun and regroup.

Sitting in the dark, passing the bottle between us, I noticed a movement above my head. I looked up to see hundreds of white spiders abseil­ing from the roof. ‘Jesus!’ I shouted, spilling whisky down my shirt. Within seconds there were spiders in my hair. I scrambled to get out. Dudley pulled me back.

‘No! We have to stay! We have to let them walk on us!’ I pushed him away and crawled out, shrieking and slapping at my head. Dudley stayed inside for another minute or two then emerged with a face full of spiders. He seemed disappointed in me.

‘Come,’ he said, ‘let’s take off all our clothes and run naked through the bush.’ The idea of impaling my genitals on four-inch thorns was marginally less appealing than the spiders and I had to turn him down again. He started get­ting angry.

‘What the fuck is wrong with you?’ he shouted. He erupted in some kind of weird whisky-and-shroom fuelled rage and we set off for the lodge at high speed.

I let a couple of weeks go by before calling Jaxin.

‘What the hell were you thinking?’ I said.

She giggled. ‘He sensed something had happened. He kept asking and asking and eventually I told him just to shut him up.’ Surprisingly, he hadn’t thrown her out. I certainly would have.

‘Come and fetch me,’ she said.

The plan was loose. She would pick me up from the airport and we’d go to her house – well, her husband’s house – and collect as much of her stuff as we could. We would then elope to Namibia. It seemed like the right thing to do.

The house was down a dirt road in a subtropical jungle a few kilometres south of Richards Bay. She had been living there for almost as long as I had been married to Gwen and had cultivated a beautiful wild garden. Husband Chris was out of town on business. It was hot so we stripped down and jumped into the pool. I heard a door open and looked up to see a strapping young fel­low walking across the lawn towards us.

‘Howzit,’ he said, eyeing me suspiciously. I moved slowly towards the deep end.

Jaxin gave a bright smile. ‘Hey there. This is a friend of mine. We’re just having a swim.’

He nodded thoughtfully, then turned and walked back into the house. I heard his car start up and drive off.

‘Right,’ I said, launching myself from the pool, ‘let’s move.’ The son was built like a rugby player.

Jaxin scrambled to get her stuff together while I sat in the car with the engine running. Minutes went by. The driveway was wide enough for only one car so if he came back, I’d be trapped.

‘Hurry the fuck up!’ I shouted, hooting impatiently. Jaxin burst from the house with an armload of clothes.

‘Just got a call from the office,’ she said. ‘The son’s worked out who you are. He’s coming back.’

‘Get in!’ I shouted. Instead, she ran back into the house to get more stuff. The office was only a few hundred metres away. He would be coming in an armour-plated bakkie, probably with a machine gun welded to the roof. He’d have some of the staff with him. They would be carrying pick handles and ma­chetes in case the gun jammed.

I thought of leaping out of the car and running blindly into the bush, leaving Jaxin to her fate, but just then she jumped into the passenger seat and shouted, ‘Floor it! Hurry!’

As I wheelspun onto the dirt road leading to the free­way, I caught a glimpse of a car broadsliding into the driveway. Five seconds later and I wouldn’t be here to recount this extraordinary tale of courage and chivalry.

There are few things more romantic than stealing another man’s wife and eloping to a foreign country. Everyone should do it at least once in their lives. If I am married though, don’t try it with my wife. Try it with someone else’s wife. Unless, of course, I have had enough of her. In which case feel free.

Crossing the Orange River border in Jaxin’s car, I felt happy for the first time ever about coming back to Namibia. The ties that had bound me there so tightly for a decade had been loosened. Gwen was back in the house, and I was still spending time with Liberty on weekends. Everyone seemed fine. Even me.

Jaxin had been 22 when I brought her to Namibia for the first time – when I joined the SWABC – and she had caused an uproar with her smouldering good looks and raw animal sexuality. Now, that ripeness of youth had been replaced by something else, something even more desirable. It was ten years later and she had become a woman.

Before I had left for Durban, I warned Stacey and the singer and whoever was still lurking around hoping for a shot at my nether regions that I was going to fetch my old-time girlfriend, to save her from a loveless marriage. It sounded nobler when I put it that way.

I knew I couldn’t trust my friends around her. They didn’t disappoint. Almost to a man, they went out of their way to steal her from me. I had to constantly be on my guard. Jaxin loved backgammon, and friends who couldn’t tell a backgammon board from an ironing board were suddenly masters at the game. ‘Play with me,’ they would say, wiping the drool from their chins.

I almost gave up smoking, thanks to Jaxin. We went into the desert for a weekend with a case of beer, two bottles of tequila and a bag of weed. There is little point going to the desert otherwise. There’s fuck all there. You’d be an idiot to go unprepared. People without drugs and alcohol have been known to die in the desert. Of boredom, mainly.

We drove through endless vistas of despair and desolation until we reached the campsite at Sossusvlei deep in the Namib – the world’s oldest de­sert. By the time we had the tent up, I felt like the world’s oldest man. A brace of cold beers revived me sufficiently to join Jaxin on a stroll.

Only it wasn’t a stroll at all. It was a hike. A route march. We eventually stumbled across Sesriem Canyon and made our way to the bottom. It’s a long, jagged gash torn into the surface of the planet. Dry most of the year, we were lucky to find water in it. We splashed and plodded along until it grew deeper.

‘Let’s take our clothes off and keep going,’ I suggested. Jaxin seemed scep­tical but went along with it. We swam into the canyon, the steep walls closing in on us. It was surreal and spooky. Then the canyon opened up and I spotted a cave within reach. We stopped for a bit to catch our breath and mate with one another. Swallows and doves swooped and soared all around us, their calls echoing through the canyon. It was breathtaking. Less breathtaking was finding our way out as darkness fell.

We finally got back to the campsite in desperate need of dry clothing and wet tequila. I lit a fire and we tossed something on it. Jaxin was a vegetarian so the meat was mine. She got all the nutrients she required from Olmeca Gold and marijuana. We may or may not have been alone in the campsite. I don’t remember seeing anyone else, but that doesn’t mean they weren’t there.

At some point in the evening we had an argument, as couples do when they overmedicate in the middle of nowhere. I stormed off wearing nothing but a kikoi and a large glass of tequila and orange juice. I walked angrily into the darkness until my anger wore off, at which point I lay down on the sand, looked up at a billion stars and had my mind lightly blown.

A scorpion crawled onto my face. I took it as a sign that I should leave. I couldn’t tell if I had been gone for 20 minutes or six hours. I could see no lights. Eventually I saw our campfire in the distance – well, ‘distance’ in the sense that it was a hundred metres away. Jaxin had already gone to bed. I poured myself a fresh tequila and lit a Chesterfield.

‘I could have died out there,’ I muttered.

‘I was watching you the whole time,’ came a voice from inside the tent.

A little while later, or maybe a lot later, I opened the zip of the tent with a view to making amends. What I saw made me recoil. Jaxin’s face had morphed into some kind of demon. It was horrible. A malevolent death’s head grinned at me, teeth bared, eyes flaming. I fell back with a scream, dropping my glass.

‘What the fuck?’ I shrieked. I moved over to the car but the doors were locked. And the succubus had the keys. I saw a movement in the tent and picked up a rock. The zip opened and out stepped Jaxin.

‘What are you doing?’ she asked. I clutched my heart and reeled against the car.

In the morning, my heart was still racing. I couldn’t explain to her what I had seen a few hours earlier without sounding like a complete psycho, so I blamed the cigarettes. I said they were placing too much strain on my heart and that I was going to stop smoking. Jaxin didn’t smoke cigarettes so she was unable to grasp the full import of what I was saying. We packed up and drove out of the campsite. I took my last two boxes of smokes and tossed them out the window.

‘Litterpig,’ she said. What else could I do? If I kept them in the car I would smoke them. And there were no convenient bins in the desert. I wanted to live, and if that meant killing the planet, it was a small price to pay. Besides, it would only take a few thousand years for them to biodegrade.

By the time we got back to Windhoek, the monkey on my back had invited a few friends over. You couldn’t see my back for monkeys. I rolled a joint.

It wasn’t long before I was back on the cigs.

* Incognito – The Memoirs of Ben Trovato is published by Pan Macmillan and is available in bookstores from 19th May.