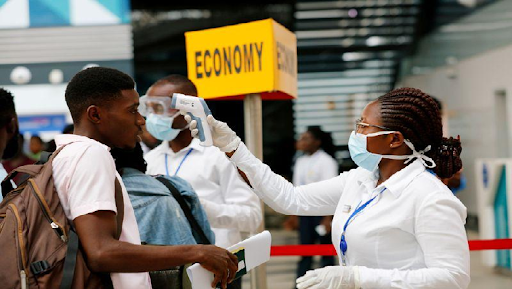 There is a giant killer asteroid heading our way. The bad news is that it’s going to miss us by six million kilometres. We desperately need something to put this coronavirus fiasco into perspective, and I can’t think of anything better than a massive space rock smashing into the earth somewhere in the vicinity of, I don’t know, the White House maybe.

Like most decent South Africans, I tend to suffer a spontaneous gag reflex and break out in hives when I see the name Gupta, but this was a message on Twitter from CNN’s Dr Sanjay Gupta (no relation) saying, “You will notice that starting today CNN will describe the ongoing coronavirus situation as a ‘pandemic’. This is by no means to panic, but to prepare.”

Prepare for a sudden jump in the Nielsen ratings? Possibly. I don’t care. Donald Trump can’t pronounce words of more than two syllables so he pretends Covid-19 is just flu with a fancy name. In this case, I’d sooner trust a Gupta.

Experts keep saying we shouldn’t panic but they are wrong. Panic is exactly what is needed right now. Other experts say we need to work together to combat this thing. Nonsense. We need to do the exact opposite. It’s the togetherness of things that causes the virus to spread.

I’m okay. I avoid people as a matter of course. Self-quarantine is a lifestyle for me. It’s you married folk with jobs, children, hobbies and social lives who need to make some serious changes.

We can’t be having big groups of people anywhere. Soldiers tend to congregate in large numbers around the world. All wars must be cancelled immediately. Bring the troops home. Send them to their rooms.

There’s no end of advice on what to do to avoid contracting the virus, but there’s very little information available on what to do if you want to catch it. If you have nasty kids, a miserable spouse and a horrible job, Covid-19 presents the ideal opportunity for a break from it all. However, catching it is harder than you might think. At the time of writing this, only seventeen people in the country had tested positive.

When I was a teenager, a friend and I would have a thing where we’d sneeze directly into each other’s faces. The trick was to not let the other one see it coming or he’d run away screaming. You’d have to mask the build-up, then quickly turn and let rip. Good times.

To get a couple of weeks off school or work, you’d need to find someone who is infected and get them to sneeze on you. Forget about the seventeen who are infected. They are already in isolation and will probably raise the alarm if you sneak into their room and ask them to cough into your mouth. Anyway, it would be difficult to track them down.

A better idea would be to keep an eye out for people who look like they might be feverish. Go up to them and tell them they are having a heart attack. Start giving them mouth-to-mouth. Bite their tongue if they try to fight you off.

If that’s not for you, then you could try touching their faces. We’re told not to touch our own, but there’s been no mention of not touching other people’s faces. You could pretend to be blind and say, “Is this the bus stop?” while slipping your fingers into their mouth. Don’t let them see you licking your hands afterwards otherwise they might think you’re crazy instead of blind. Not that it’s any of their business.

Obviously you should avoid washing your hands at all costs, especially after touching surfaces that get a lot of human traffic.

If you see someone coughing or sneezing, don’t waste the chance to get up close. Rush over and breathe deeply. Bodily fluids aren’t going to come to you. You have to go to them. Don’t be shy. Stand close to people at every opportunity. Press yourself up against them. If they seem uncomfortable, tell them you were under the impression this was the queue.

If, however, you are single, self-employed and loving your life and would rather not contract the virus, you need to carry with you a bottle of vodka and sprinkle it on everything, including people, food and pets. Young women are immune to the virus so don’t waste your vodka on them. Unless you want to offer them a drink in return for a kind word and a bit of a cuddle.

The World Health Organisation suggests we follow advice given by our healthcare provider. I don’t know about that. The only advice I ever got from Discovery was to pay my premiums on time or risk dying alone in the gutter.

I read a BBC report this week that said, “Researchers have developed vaccines and are starting to test them on animals, and if that goes well there could be human trials later in the year.” Good news for people, bad news for rats and rabbits. On the other hand, it was animals that caused the virus so it’s only fair that they help find a cure.

Anyway. Everyone needs to stop overreacting. This thing has a mortality rate of 3%, which is what I got for maths in matric and I turned out just fine.

10 thoughts on “Coronavirus – No Laughing Matter”