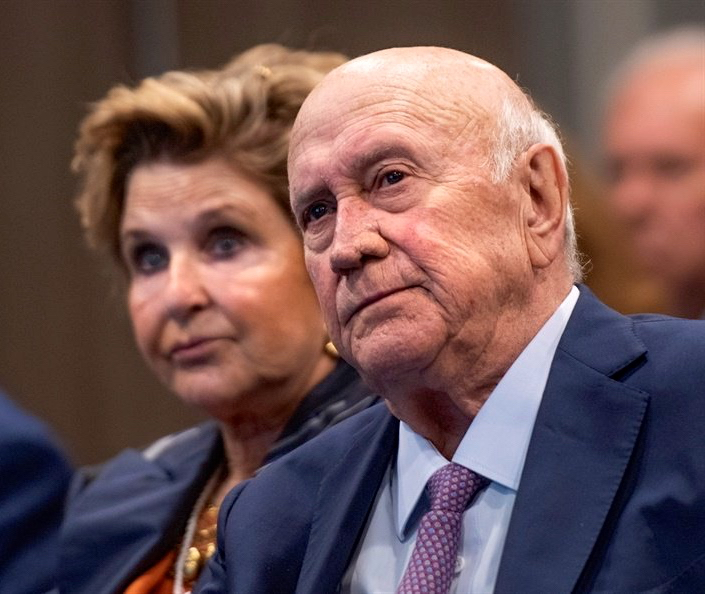 Congratulations on officially achieving the rank of Most Hated Man in South Africa. This is no easy feat in a country like ours. Coming in second is Jacob Zuma. In fact, it’s almost too close to call. In the interests of fairness, I think you and Jacob should share the honour, like you did the Scandinavian prize with that other black guy.

What tipped the scales in your favour is that you are now hated by people across the political and racial spectrum, whereas Jacob is hated by all white people and only some black people.

It wasn’t always this way. Until quite recently, you were only properly hated by white conservatives for selling out and giving the country to the communists. White liberals thought you were quite a good oke for releasing Mandela. Black people, on the other hand, didn’t think you should get any credit at all because they reckoned Mandela should never have been locked up by your people in the first place. Unreasonable, I know. But that’s darkies for you.

Then you went and said that apartheid wasn’t a crime against humanity. That was a bridge too far, even for the liberals. Suddenly you were no longer such a good oke. And if there were any black people who still thought you weren’t too bad, compared to, say, Hitler or Kim Jong-il, they turned against you, too.

I don’t really care what you think about apartheid. You became my personal hero when you had an affair with some or other Greek tart married to a shipping tycoon who helped fund the National Party. A friend of yours, I understand. He was basically paying you to shag his wife behind his back. Classy. The cherry on top, pardon my French, was when you waited until Valentine’s Day to announce your intention to trade your wife in for a younger model. That magnificent act of unparalleled evil completely overshadowed apartheid and boosted your ranking in the patriarchy.

Anyway. The bigger point is that in 1966 the UN General Assembly declared apartheid to be a crime against humanity. I was still too young to dispute this. For me, not being allowed to wee in my bed was a crime against humanity. You must have been in your late twenties then. Probably studying Dr Guido Landra’s Manifesto of Race and hitting on your brother’s girlfriends.

The next thirty years were spent clawing your way up the political ladder, hanging out with chums like John Vorster and PW Botha and making sure that separate development meant that the whities got the development and the darkies were kept separate. Fair enough. A policy is mos a policy.

Then Margaret Thatcher advised you to throw in the towel and you turned the country over to the communists – who turned out not to be communists after all. In 1998 a Truth and Reconciliation Report endorsed the UN position that apartheid was a crime against humanity and said you’d been a very naughty boy. You were understandably outraged, having only just discovered at the TRC that “rogue individuals” had for years been killing, incarcerating and torturing anyone who didn’t agree with your government’s notions of white supremacy.

At the time, you also said this: “I reject the contention that apartheid was a crime against humanity, notwithstanding the serious injustices which occurred and for which I have sincerely apologised.”

Flash forward 22 years to last Thursday. When I saw you and the Hellenic home-wrecker lurking in the peanut gallery in parliament awaiting our sloth-like leader’s blindly optimistic State of the Nation address, I suspected trouble could be brewing.

You had, after all, just days earlier said in an interview with the SABC that apartheid was not a crime against humanity. You must have known you were putting a match to a block of political Blitz.

But even so, when Kiddie Amin initiated his increasingly predictable Meow Meow Uprising, all eyes were on Pravin Gordhan. So it must have come as something of a shock when the jabbering infant in the red onesie pointed in your direction and shouted, “We have a murderer in the House!”

That couldn’t have been fun. Nobody wants to be called a killer on live television. At home around the braai, sure. But not in parliament.

In the good old days, it would have taken a single phone call to make the entire EFF leadership disappear overnight. I don’t know what torture methods you would use on them today. Give them Highland Queen instead of Johnnie Walker Blue? Make them wear denim shorts from Mr Price? Crocs instead of Ferragamo loafers?

I bet your trophy wife wasn’t keen on going in the first place. Women can sense these things, you know. You marry a nice prematurely balding guy who once led a vicious regime predicated on violence and racial superiority, you think twice before going out in public with him. Especially to the very place where apartheid was spawned and suckled. Talk about returning to the scene of the crime against humanity.

Of course you were upset. Who wouldn’t be? But where most men would go home, get drunk and take it out on their wives, you went home and, through your FW de Klerk Foundation, released a statement saying that fewer than five thousand people had been killed by security forces between 1960 and 1994. Your proud Boer heritage kicked in and you doubled down.

“The idea that apartheid was ‘a crime against humanity’ was, and remains, an ‘agitprop’ project initiated by the Soviets and their ANC/SACP allies to stigmatise white South Africans by associating them with genuine crimes against humanity …”

That might have been a bit of an oopsie. Then again, your defence of apartheid did succeed in uniting South Africans of all races. It’s usually only the Springboks who can do that. Sure, it united them in their hatred for you, but still. It’s the unity that’s important.

Later, Thabo Mbeki asked you what the hell were you thinking and you told him you hadn’t been aware of the UN convention. Not quite true, as it turns out, but then again you are getting on a bit and it’s easy to forget what you said in 1998. Anyway, Mbeki still can’t understand how a virus can cause a syndrome so don’t worry about him.

At the end of it all, you apologised and said that apartheid was, in fact, a crime against humanity and not, as you mistakenly imagined, a minor inconvenience. I can imagine how much that must have grated. Here you are, with the world’s top peace prize sitting on a crocheted doily above your fireplace, below the flying ducks, and you still have to say sorry for assuming that a system which dehumanised a mere forty million people wasn’t all that bad.

Patriots like you should never have to say sorry. Your father served as interim State President in 1975, for heaven’s sake. Okay, so it was only for nine days. He was the original 2-minute noodle. You were also the Minister of Mines and Energy for a year. Eskom was one of your responsibilities. Sooner or later, you’re going to be accused of having caused loadshedding.

If I were you, I’d get in early and apologise now.