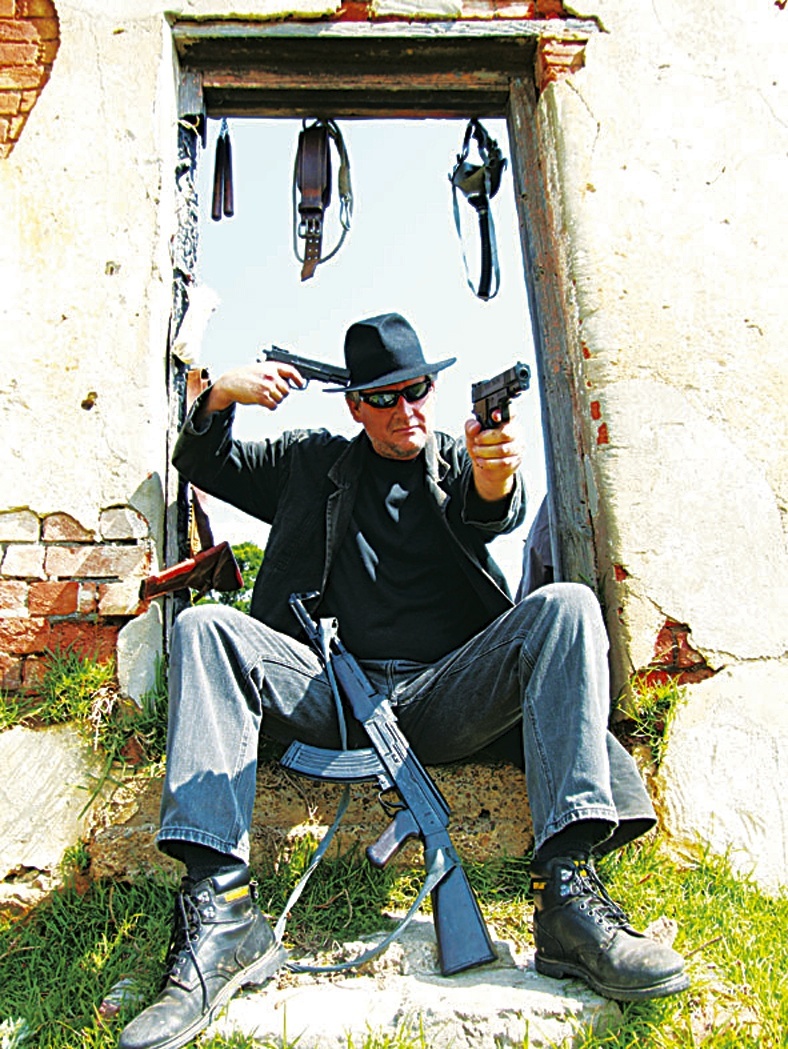 South Africans are up in arms over a proposed amendment that says self-defence is not a good enough reason to be awarded a gun licence.

I like the idea of guns more than I like guns themselves. They’re a bit like women. And I don’t mean loud and capable of going off for no reason. I mean you feel invincible when you have one, but take it away and you spend your nights in the foetal position crying yourself to sleep.

Guns are weirdly supernatural. I don’t understand how they work. I also find television and electricity weirdly supernatural. The idea of being able to kill someone a kilometer away is strangely compelling, though. You needn’t even stand up. Simply put your beer down, rest your rifle on a small child’s head, aim and pull the trigger. Bam! One less person on the beach.

“A small community in Virginia mourns as a man dies after having sex with his revolver.” It got worse, with references being made to Guns N’ Roses, a band that toured Europe in the late 1940s, precipitating the early surrender of the Nazis.

I prefer knives to guns. Throw a gun at someone and you’ll just make him angrier. But throw a knife and there’s a chance he will think you’re a Ninja and take cover, giving you time to run away. Also, when you’re not stabbing someone, you can use the knife to put Marmite on your toast. Try doing that with a gun.

When I was a kid my father would take me and his Walther PPK pistol down to the dunes near the mouth of the Umgeni River. The first time it happened I thought he was planning to kill me. Especially when he sat down and polished off half a dozen beers. Instead, he lined up the empties. Then he put the gun in my little hand and told me to pretend the cans were communists. I pulled the trigger and the metal beast barked and bucked, almost breaking my fragile wrist. It was an exhilarating example of cause and effect. Pull on this little thing and something wild and inexplicable happens. It’s why boys love magic. It’s also why they love masturbating.

However, if this was a rite of passage, I failed miserably.

“Stand closer,” he said. I kept missing. It was ridiculous. I was wasting the entire month’s food budget on ammunition but he wouldn’t let me stop.

“Squeeze the trigger, don’t pull it!” he shouted. “Let’s try a bit closer.” The barrel eventually rested lightly against a can. This wasn’t target practice. It was an execution. He never took me shooting again.

They have several categories of guns including competition, concealed carry, home defence and short to long-range. We don’t mess about with categories in South Africa. We just go to a township and ask around. Or take one off a sleeping policeman.

I was immediately drawn to the concealed carry category because I have always liked hiding things. This probably explains my failed marriages.

The multi-purpose category has many handguns to choose from. “Perhaps you want something to put on the nightstand after spending the day with it on the range. Or maybe you want something that you’ll shoot as often as you carry it.” I don’t understand what any of this means. I want to be able to pull the trigger and have a piece of lead ejected at 1000m a second. Forget all this talk of nightstands. You don’t want your gun reminding you of bed – you want to be reminded that it makes living things dead.

“The good news is that Springfield Armory produces several ergonomically pleasing and feature-rich firearms with plenty of capacity and power.” This is good news for victims. Imagine the indignity of dying in a pool of your own blood after being shot with a firearm that was less than ergonomically pleasing. What a horrible way to go.

Speaking of which, I’m disappointed that the shape of guns has barely changed since they were invented. Look at the range of bubble guns in toyshops. I saw one the other day shaped like a seahorse. I, for one, would be far more inclined to arm myself if I could buy a pistol shaped like a mongoose or a dolphin. Come on, gun people. Let’s put the fun back into fundamentalism.

In the meantime, it seems we have two options. Ban firearms and ramp up the sentencing laws. If you’re found with a gun, you go to jail for 20 years. Or stop fannying about with amendments and arm the nation. Allow the poor and mentally handicapped to qualify for state-subsidised guns. Offer weapons training as part of the school curriculum. Death skills, perhaps, as a counterpoint to life skills.

Bars can run specials. Trigger-Happy Hour! A free 9mm round with every shot of tequila.

And forget about background checks. If you can tie your shoelaces, you’re eligible to own a gun. If you don’t have shoes, you will have to perform some other competency test. You could be asked to count to ten, for instance. If you can’t get further than five, you’re fit only for a small-caliber pistol. Get all the way to ten and you can have an AK-47.