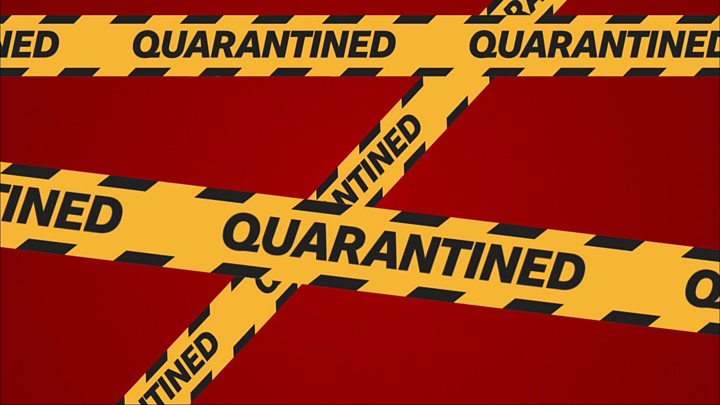 There’s almost a festive atmosphere in our supermarkets at the moment. Trolleys are full and the queues are long. It feels a bit like Christmas, but instead of exchanging gifts we’re going to be giving our loved ones a deadly virus. And instead of The Little Drummer Boy, the shops are playing Chopin’s Funeral March. What a time to be alive. Or, as the case may be, not.

True to form, I have left my panicking to the last minute. Now I’m panicking that I’ve missed the panic buying frenzy and there will be nothing left on the shelves.

Coming, as I do, from a long line of backsliding misanthropes, self-isolating comes easily to me.

As a child, I spent school holidays indoors away from other less sensitive children who might lead me astray, pollute my diction or do me physical harm. My mother would bring out The Book. Things to Make and Do. It had a hard cover and was packed with suggestions, diagrams and illustrations of, well, things to make and do.

I spent many happy hours making finger puppets from peanut shells. I drew little faces on the shells and stuck them on my fingertips. Each character had its own voice and sometimes I had all ten of them having conversations, arguments and debates. The voices faded as I grew up but they’ve never really gone away.

When the discourse became too heated and the peanut shells broke, I’d make elaborate collages using buttons, feathers, bits of plastic and a bucket of industrial glue. Man, I loved that glue.

Later, as a teenager, a very naughty boy gave me a copy of The Anarchist’s Cookbook and I learnt how to make improvised explosive devices and primitive crack cocaine using ordinary household items.

Things are different today. For a start, there’s television and the internet to keep the anklebiters and juvenile delinquents occupied. Try taking away a 14-year-old’s phone today and giving him a copy of Things to Make and Do while this psychopathic pathogen does its dirty dance across the planet. You’ll be looking for ways to infect your own child long before he has to go back to school.

Families that self-isolate together stay together. This is obviously not true and I’m surprised the government hasn’t yet added it to its regularly updated List of Lies to tell the media.

Families only manage to survive as a unit because everyone goes in different directions in the morning and they don’t see each other again until eight or nine hours later. Now, with nobody going to work or school, the dynamic is fraught with possibilities, none of them good.

Well, it’s good for the Jehovah’s Witnesses because they know there’s always someone at home. If you aren’t able to hide in time or accidentally open the door, one of them might say, “Have you heard the good news?” You need to rip the surgical mask from your face and shout, “The virus has been defeated?” Throw yourself at him and lick his face with joy. Everyone is a bit on edge these days, though, so don’t be surprised if the quiet one tries to bludgeon you with a rolled-up copy of The Watchtower.

This is also good for marriage counsellors and divorce lawyers. The only reason marriages last as long as they do is because husbands and wives are separated for most of the day. The maximum amount of concentrated time a couple can spend together before one of them wants to murder the other is four hours. Three if one is Taurus and the other Leo. In homes where homicide is not an option – perhaps among vegans – the long silences will eventually become too terrible to bear.

People talk of all the babies – the coronial generation – that will be born as a result of self-isolation. I don’t think so. The novelty of being able to shag at will around the clock will quickly wear off. Among women, mostly. Harsh words will be exchanged and Mexican standoffs declared. Neither party will want to initiate sex for fear of looking weak and nobody will get laid for extended periods of time. So much for love in the time of corona.

Personal hygiene quickly falls by the wayside. Children, filthy savages at the best of times, start rotting from the inside. Husbands stop shaving because what’s the point. Soon after, their wives stop shaving. The decline of civilisation starts. Dishes pile up in the sink and nobody takes out the garbage for fear of inhaling a stray Covid-19. Hooligan diseases begin to fester in these domestic petri dishes.

Boredom becomes the biggest enemy, especially among those who rely on DStv for their entertainment. A person can take only so many repeats before clawing their eyeballs from their faces. People who love reading – all twelve of you – will be fine.

One of the biggest challenges is getting out of bed. The important thing is not to feel guilty if you spend an extra hour or day or two in bed. Manic depressives have given lying in bed a bad name. A bed is a piece of furniture much like a couch or chair. Stay in it for as long as you like. Keep a bottle of whiskey on the nightstand to disinfect bedsores and stay drunk.

Don’t try to home-school your kids. They will hate you for it and punish you when you’re too old and weak to fight back. Rather use the time to teach them a skill. If your son isn’t very bright, encourage him to take an interest in plumbing and get him to clean the toilet. Teach your daughter how to make vodka. All you need are potatoes and a few litres of hand sanitiser. If you’re a working class family, get mum to bake loaves of bread. The child with the best hand-eye coordination gets to filter methylated spirits through the bread. We’re riding the blue train tonight, kids. Choo-choo! Fun for the whole family.

You might want to impose some kind of political system on the domestic arrangements. You could opt for a democracy where everyone gets a say, but I’d advise heavily against it. A dictatorship is a good choice, but you’d need to rule with an iron fist or risk a coup. If I had a family, and I did once, I’d go for anarchy. Let everyone do whatever they want in the knowledge that consequences will be random and injuries can be expected.

If you have an irritating elderly parent living with you, now is a good time to isolate him. Tell him the government has issued an edict that all grandparents must be put into quarantine. Lock him in his room and paint a black cross on the door. Slide his food under the door. Pancakes and pizza work well.

Nobody wants to risk death by being sneezed on at Woolworths, so you’ll have to produce your own food. It’s now legal to grow marijuana at home. That’s all the food your family needs. Use the hemp to make clothes, although when things turn feral – and they will – clothing will rapidly become optional.

19 thoughts on “Isolation for the nation”