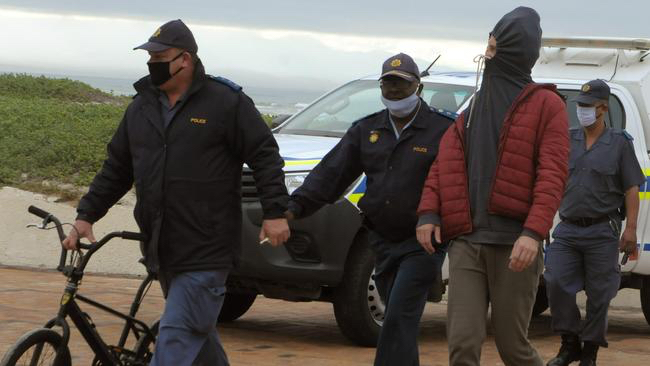 Bit tricksy, this lifting of the locky-locky.

We don’t know how it’s going to work, but then again, I’m pretty sure they don’t either. In South Africa, the word ‘they’ is a bullet that’s been fired discriminately for many years.

In this case, They be the masters and mistresses of our fate. We are very much in an Us and Them situation. And for once, it’s not a racial thing. Well, it is, but also it isn’t. It’s primarily a power thing. If you command the army and the police, you can do whatever you please. Liberal snowflakes like Hendrik Verwoerd and PW Botha knew this very well. It’s no coincidence that our police  minister wears a pork-pie hat just like they did. Oink-oink.

I drove to the mall this morning after realising that if I had to spend another entire day in my own company, I’d almost certainly do myself a mischief. No, not myself. I’m too gutless for that. I’d turn on someone else. My neighbours, perhaps. I have reached Level Blindly Lashing Out and, going by what I see on social media, I am far from alone.

On my way to line up outside the supermarket along with hordes of other potentially diseased wearers of unclean masks and recalcitrant maintainers of social distancing, I drove past my local township. It looked like any other pandemic-free Saturday. The vegetable market was buzzing, women were selling second-hand clothes on the pavement, men were chatting and laughing, children played among the debris of their broken dreams.

Fine with me. What do you want to do? Chase everyone back into their corrugated iron shacks? Force people to buy masks when they can barely afford food? Arrest all 40 000? That’s a lot of paperwork, sergeant. Keep driving. We saw nothing. Let’s go harass those surfer kids down the road. Bust them for being in the ocean. Maybe we get lucky and find a granny walking her dog after 9am.

For obvious reasons, townships aren’t complying with lockdown regulations and police have given up trying to enforce pretty much anything apart from prohibition and the curfew. For equally obvious reasons, infection hotspots are more likely to develop in areas where people are jammed into taxis and pension payout queues and are living la vida loco like there’s no tomorrow. Which, as we now know, there isn’t.

Meanwhile, over in Karenville, the cops are stalking the beaches and leafy suburbs hoping to nail errant whities for violating one or other of the government’s many unhinged new rules. Covid-19 is unlikely to devastate too many white suburbs because residents have masks and sanitisers and big houses with gardens and snitches for neighbours.

The gummint says they will or might or are thinking about imposing different lockdown levels based on where the hotspots are. On paper, this means townships would stay locked down forever, while white people are allowed to roam free. It’s never going to happen. The optics would be appalling. Brutalist sociological architecture comes at a price and it took a virus for whites to pay it. Collective responsibility, collective punishment. Nobody ever said life was fair.

The mall was, at least, a brief diversion from the madness. Most shops were open and there was more stuff I was allowed to buy. I still had free will. Not entirely, but enough to not want to firebomb the building, form a rebel army and overthrow the government.

In the bakery section I spotted two illicit pies lurking in one of those incubator affairs. I demanded both and began wolfing the chicken and mushroom one right away. It was like warmed up crack. The pie lady said she needed to put a price sticker on it and, with some reluctance, I returned the half-ravaged pastry to its mutilated packet. I made sure to keep one hand on it. I was so overcome with my pie that I inadvertently made off with another man’s trolley.

On my way out I stopped at Dis-Chem for a bottle of cough mixture to wash the pie down. There was a queue of four people outside the door. I watched them for a while while they watched me watching them. Were we smiling at each other? There was no way to tell. Just a lot of weird eye action. The regular enforcer at the door wasn’t there. What had happened was this. A woman had decided of her own volition to wait for someone to leave before she entered. More people had come up and were now standing behind her.

I looked into the shop. It was virtually empty. As I walked through the door, I made big farmyard animal eyes and a baa-baa sound. I imagine they thought I was mentally unwell.

Then I almost collapsed in the self-medication aisle when my stupid mask decided to murder me. I was sucking in massive amounts of nitrous oxide, or whatever the hell it is that comes out of my mouth, when suddenly my vision went all blurry and I had to stagger to the geriatric section and sit down in a wheelchair, where I fell asleep.

8 thoughts on “Of pork pies and piglets”