Excuse me? Are you shouting at me? You, who called the cops because my music was too loud? You, whose bastard dog wakes me every morning? You, who has co-opted a clenched fist salute so feared and despised by you not too long ago? Fuck off back to your braai. I am not of your kind.

I refuse to wear the Springbok jersey for the same reason I refuse to wear fireproof overalls during Formula One season. I don’t want to walk around Pick n Pay looking like Jenson Button and then have to get into a dented 13-year-old Hyundai in front of other people. It’s embarrassing. Besides, once I removed my helmet they’d notice that I looked considerably less like McLaren’s top driver and more like Nick Nolte clinging to the untethered end of a long Saturday night.

I grew up in Durban in a relatively rugby-free environment believing it was illegal to wear Springbok kit in much the same way that it was illegal to impersonate a police officer. So on the odd occasion that I came across bloated and bellicose beer-stained boers wearing Bok jerseys, I assumed they had once played for the national side. What I couldn’t understand was how they all ended up in such poor condition.

I didn’t like rugby. I didn’t like the people who played it and I didn’t like the people who followed it. The night before South Africa was due to play New Zealand in the 1995 World Cup final, I was sitting in a bar jotting down some rubbish in a notebook when a large slobbering imbecile whacked me on the back and asked who I thought was going to win. “Win what?” I said, coughing up some blood. He rocked back on his heels and looked at me as if I were the idiot. “The rugby, you doos. What else?” I shrugged and said, “Who’s playing?” It was as if I had got up on my bar stool and announced that I was gay and had black friends.

It was only fairly recently that I watched an entire game. Not in a stadium or a bar, obviously. That would be intolerable. Rugby fans are louder than Syrian rebels and even worse losers. The game I watched was the one against Japan where the Springboks played like a bunch of girls at a Stuttafords spring sale.

By halftime I was begging the Bad Yellow-Eyed Woman to visit the Nigerian on the corner and bring me back half a dozen heroin speedballs. She laughed cruelly and turned up the volume so I could hear every word uttered by Japan’s 16th player, the dog-faced homunculus who kept shouting, “Green leave the ball!” Since when did our mastodons of fine Afrikaner stock start listening to foreign nancy boys armed with nothing more dangerous than empty threats and a whistle?

Even though I don’t fully understand the rules of the game, I do enjoy the sheer animalistic violence of it all. I’d prefer it if there were no rules, though. Get rid of the referee. He slows things down and ruins it for the rest of us. Give the men a free hand and let them play to the death.

My friend Swirling Eddie regards himself as something of a street psychologist and he reckons I am suffering from a rare breed of repressed psycho-sexual attraction to blood sports like rugby and marriage. He brought over a green Lycra shirt three sizes too small and a pair of skin-tight shorts that make me look like that cycling cyborg Lance Armstrong before he lost half his landing gear.

We are now surrounded by seven different species of alcohol and by halftime I intend to be off my face at the breakdown. 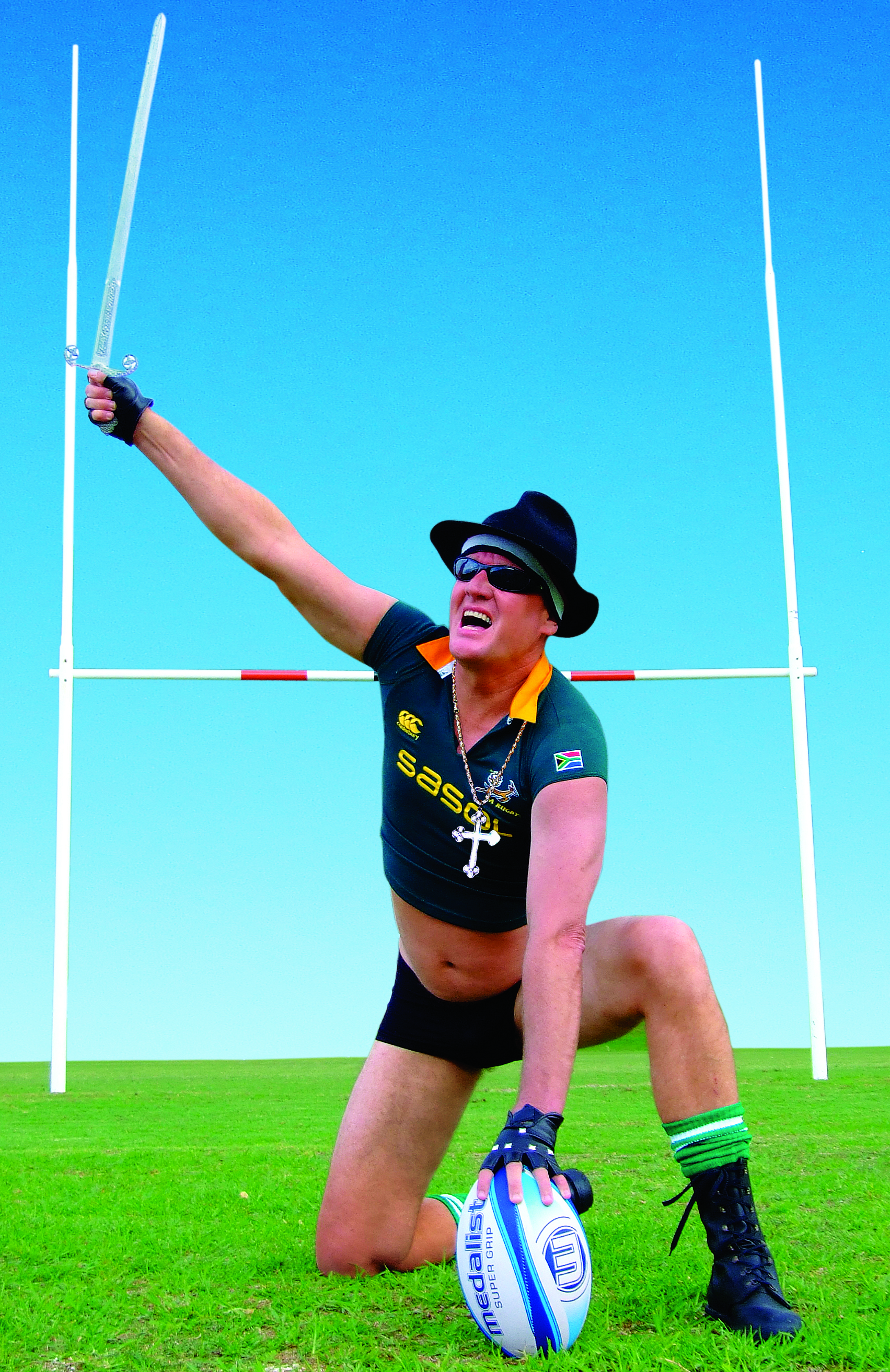