Dear Tess Thompson Talley,
I had no idea someone as beautiful and brave as you existed in America until you posted that picture of yourself moments after executing an African giraffe. I don’t even care if you aren’t a real blonde. But if you are, praise the Lord! Which is exactly what you seem to be doing in one of the photos – thanking the Almighty for having guided this cloven-hoofed beast from hell into your crosshairs. 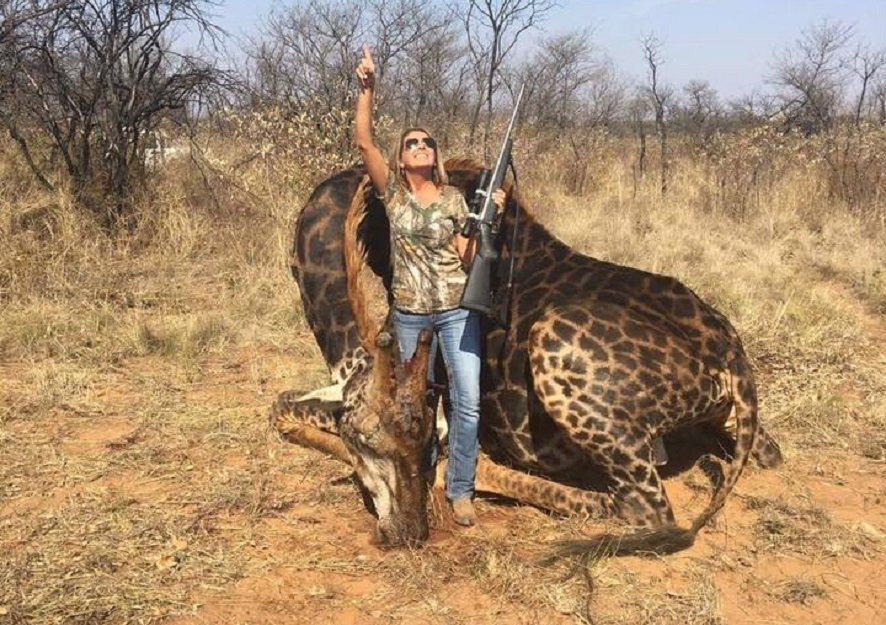 Your caption was so inspiring that it’s worth repeating. “Prayers for my once in a lifetime dream hunt came true today! Spotted this rare black giraffe bull and stalked him for quite a while. I knew it was the one. He was over 15 years old, 4000lbs, and was blessed to be able to get 2000lbs of meat from him.”
On behalf of Africa, thank you for ridding us of another giraffe. They are violent, arrogant creatures who strut about the bush looking down on all the other animals. It’s no wonder so many of the little ones, like warthogs, suffer from self-esteem issues.
Stalking a giraffe isn’t for the faint-hearted. They move so slowly that even an experienced hunter like yourself runs the risk of falling asleep and being unexpectedly eaten by a passing lion.
If it weren’t for people like you, the giraffe population would spiral out of control and it wouldn’t be long before they started moving into our neighbourhoods and sending their kids to our schools. That your giraffe was black is obviously a sign. Or bonus. Whatever.
As you say, these ones are rare. But rare only means there are others like him still out there. Thanks to your fearless efforts, his kind will soon be extinct and we will all sleep a little more soundly in our beds at night. Unless, of course, you mean that you cooked him rare.
Love the picture of you and the dead kangaroo. It can’t be easy shooting one of those brutes, what with all their bouncing up and down. And you got to do it on your birthday! It must be every little girl’s dream to shoot a kangaroo in the face when they turn 35. 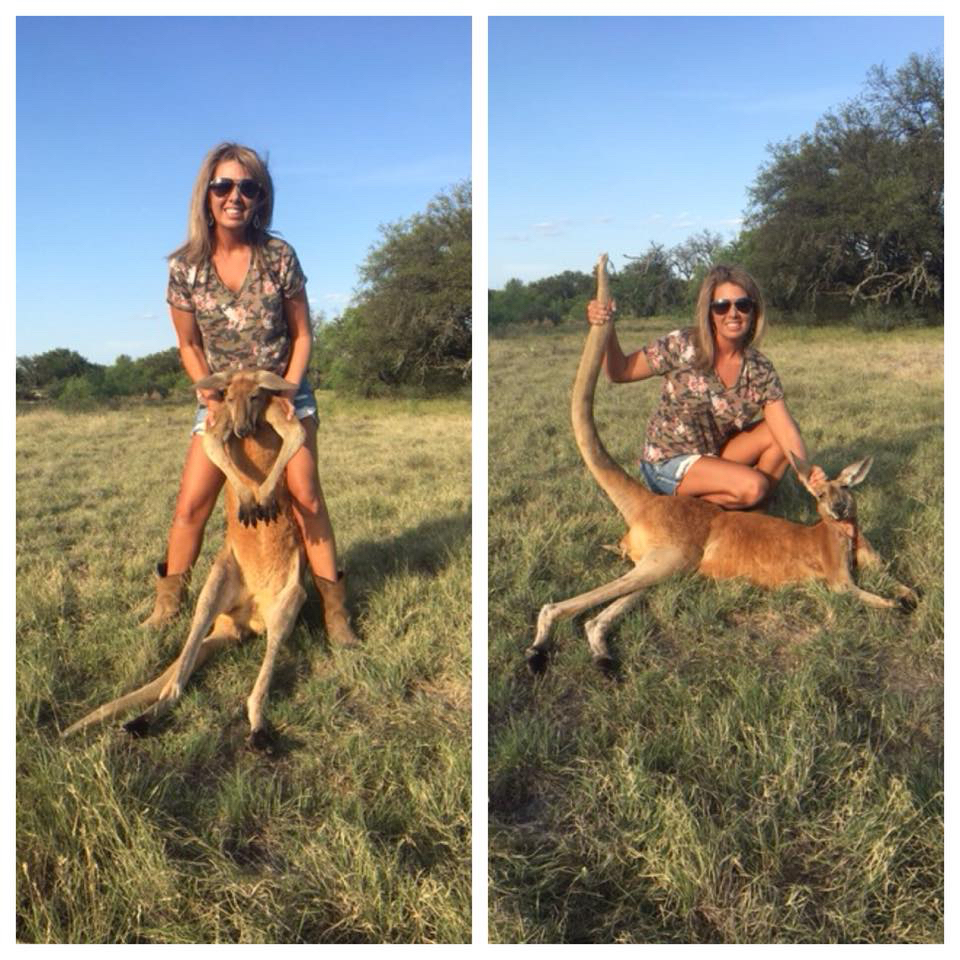 Did you convert one of its front legs into a backscratcher like your buddy Dustin suggested? Here’s another cool idea. Use his pouch to store your ammunition in! You said your roo was going to make a great mount. Don’t you use husband Andrew for that sort of thing? I’m not judging. If you want to get jiggy with a dead kangaroo, that’s your business. The French do worse things.
I see hubby has a pic of himself kneeling next to a dead sheep. Bravery seems to run in the family. It’s a good thing he was wearing full camo. There’s no telling what a sheep is capable of doing if it sees you coming.
And you’ve been redecorating your new home! Love the pic of nineteen decapitated heads scattered on the floor. I spent a fun few minutes spotting game in your living room. I saw a warthog, wildebeest, plenty of buck, an animal that looks like someone’s dog and even a turkey. And you still had eight more coming from South Africa? 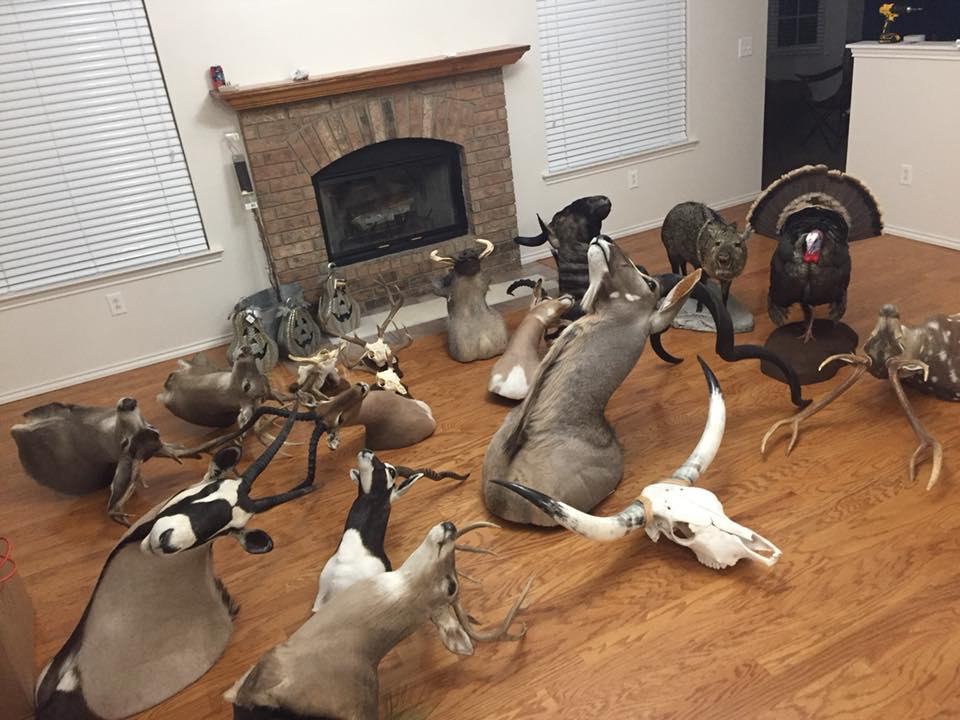 I can almost hear Andrew from here. “Hun, we’re gonna need a bigger house!” You ain’t gonna stop killing so, yeah, maybe you should build a second house just for the heads. That way you can visit them without having their glass eyes staring coldly at you the whole time. I hate the way dead animals always seem to judge you. Do you ever get the urge to shoot them a second time?
I didn’t see the portrait of your awesome president on the lounge wall. Maybe you hadn’t unpacked it yet. Or is it in the bedroom? Of course it is. I bet you get really turned on having Donald Trump watching you undress. Or is that more hubby’s thing?
I loved the picture of the cookies you baked. Little doughy deer, each with its own bleeding bullet wound. What a fantastic idea for a kid’s birthday party. You should bring out a compilation of your recipes. Call it The Psychopath’s Cookbook. Guaranteed bestseller. In West Texas, anyway. 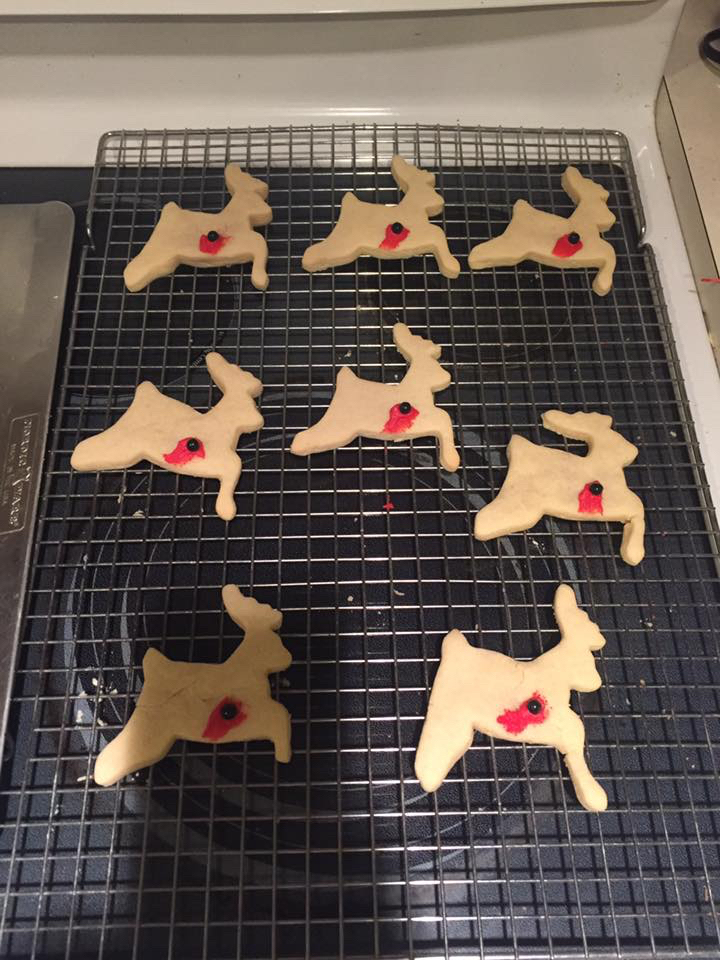 So you were in our very own Limpopo province not long ago. A place called Marken? Never heard of it. Judging by the carnage, you and Andrew must have been on your second honeymoon. There’s nothing more romantic than a woman and her man walking through the African bush while gunning down animals side by side.
Great pic of you with your dead Vervet monkey and Andrew with his baboon. Tabatha asked what you’re going to do with them and you said, “Full body mounts. These ya don’t eat.” There are animals you don’t eat? What’s happening, darlin’? Don’t get soft on us. You turn your nose up at monkey and the next thing you know you’re one of them snowflake vegan chicks driving a Prius and treating Mexicans like they’re real people. 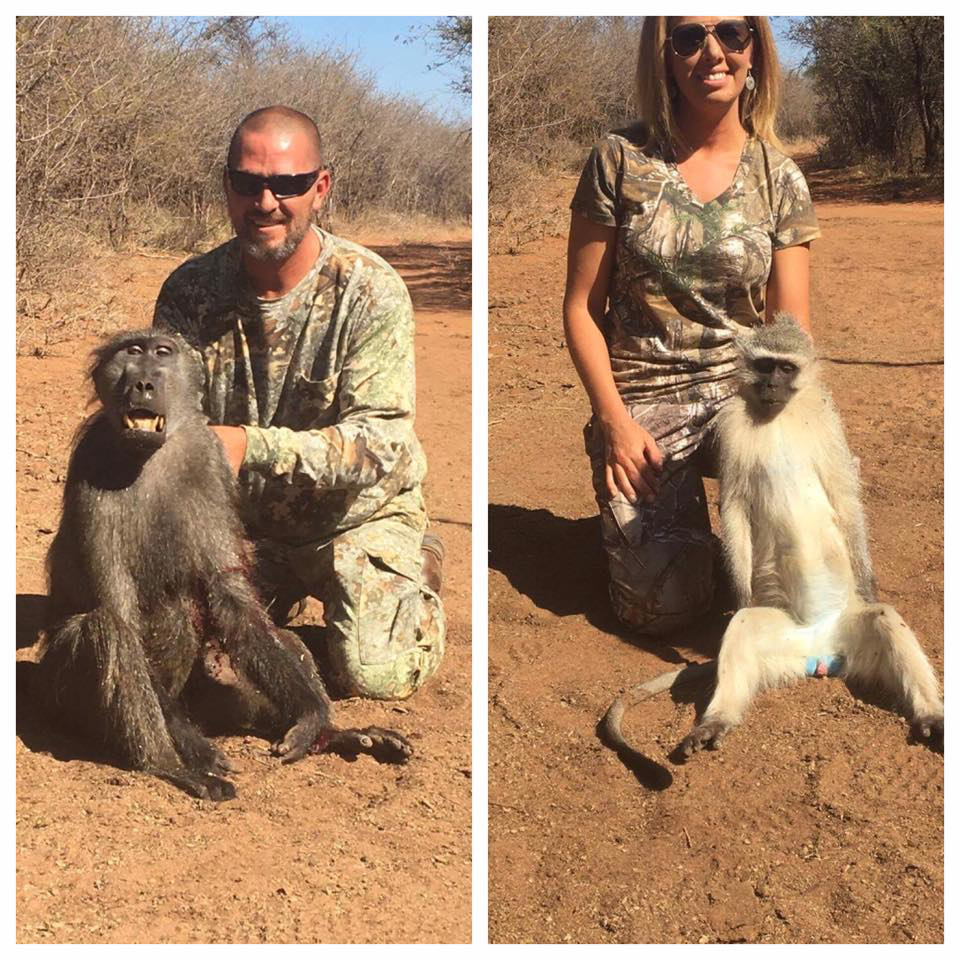 Stephenia asked if your monkey had blue balls. For a moment I thought she was talking about Andrew but then you said, “Such a pretty color huh lol.” Glad you can still appreciate the beauty in nature lol.
You told Regina that the US don’t allow you to bring none of that meat home, not even the giraffe even though he had such a yummy sweet taste. “But everything piece of meat gets ate,” you reassured her in your own special ex-cheerleader way. How do you stay so thin after putting away 2000lbs of giraffe?
So, anyway. If my government ever starts taking conservation seriously and bans trophy hunting, you could always stalk the children of illegal immigrants right there in Texas. Trump will probably move the kids out of cages now and into open-air enclosures where they at least have a sporting chance of survival. It could be fun. Anyone who makes it to 18 without getting shot is given a Green Card. You can’t get more humanitarian than that.
Odessa must be so proud of you, Tess. Not only does your town have the highest rate of violent crime in Texas, but they also have the cutest killer in the whole damn state.
Yeehaa, baby.

9 thoughts on “The buck stops here”