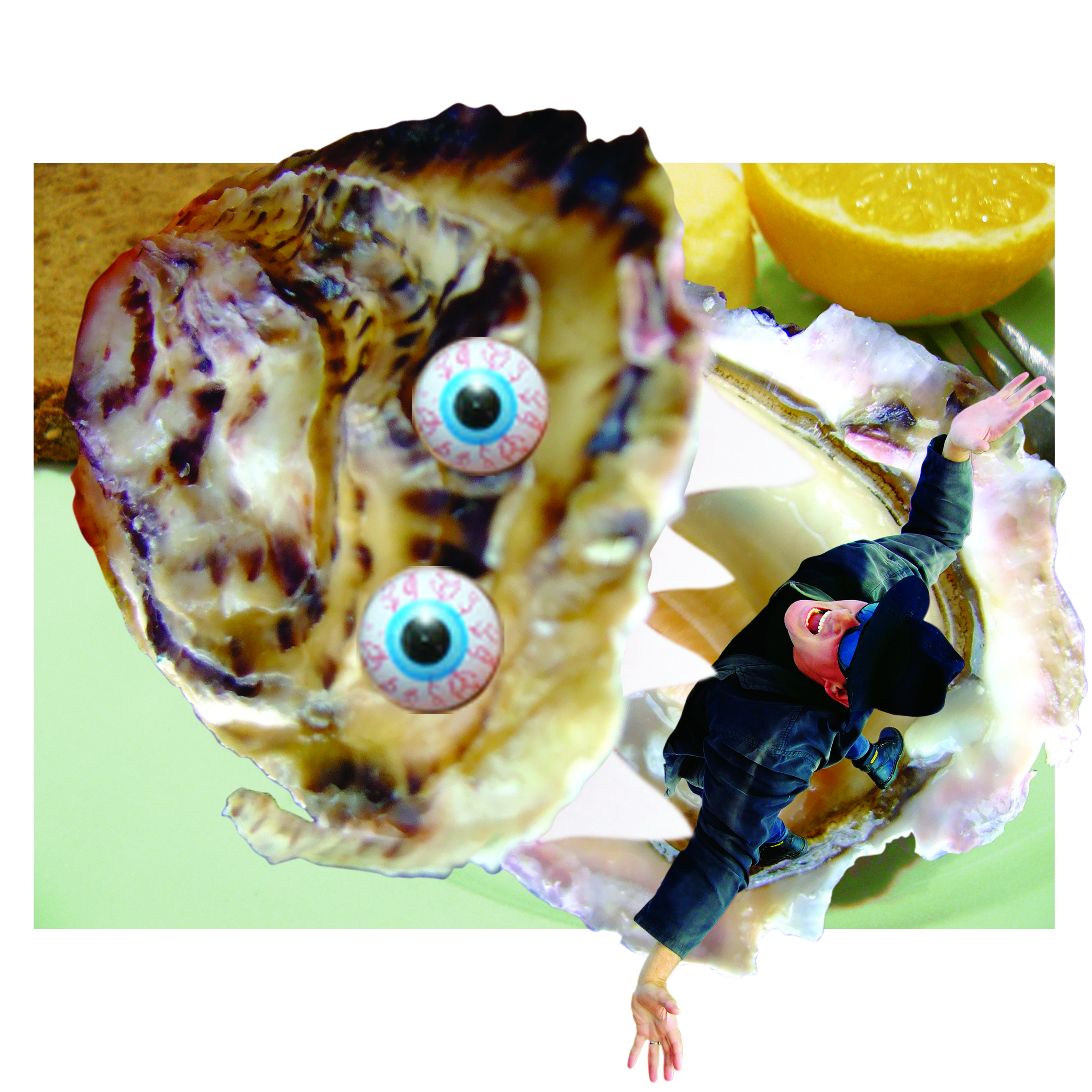 Word on the street is that oysters will turn even the most frigid misandrist into a steaming nymphomaniac. I don’t believe it for a minute. A woman’s libido is boosted by being around a man who can afford oysters. It doesn’t matter how many she eats, she will only become aroused the moment he opens his wallet at the end of the meal.

So when Brenda said she wanted to go to the Knysna Oyster Festival, I suggested we skip the long drive and proceeded to throw R200 notes at her. She turned bright red and started hyperventilating – always a good sign – so I whipped off my broeks and approached her in a crab-like fashion. Then everything went black.

The road from Cape Town to Knysna is crushingly dull. There is nothing but scenery to look at. Rolling hill after rolling hill. A mountain here and there. Fields. More fields. Cows. Sheep. Ostriches. Lambs. Mmmm. Lambs. I pulled off at a roadside stall and stuffed my mouth with as many lamb products as I could find. Brenda affectionately called me a disgusting pig of a man and I laughed so violently that she was still picking bits of lamb out of her hair by the time we reached Knysna.

The first thing you encounter as you come barreling down the N2 looking for a cold beer to dislodge the lamb knuckle that has become wedged in your esophagus, is a tangled knot of roadworks.

Knysna is one of the few quaint coastal resorts with a major freeway tearing right through the middle of it. This means you can sit at a pavement café and wave cheerily at the cattle truck drivers as they escort their terrified passengers to a violent death. That’s assuming you can see anything through the clouds of carbon monoxide.

I had booked us into a place that looked like a tropical paradise on the internet but which, in fact, looked onto a Chinese takeaway and a dangerously disagreeable bar. “This wasn’t in the brochure!” I shouted. “What extraordinary luck!”

I had visions of lying in bed barking commands to a brace of servile factotums who would scurry back and forth, feeding me oyster-flavoured beer, oyster shooters and oyster vermicelli with oyster sauce while scantily clad geishas stood quietly by with the vomit bucket and mopped my fevered brow whenever things became too much.

Brenda had other ideas, which apparently involved none of the above. I was prepared to give her some leeway since I had told her this was to be our second honeymoon.

“We really ought to consummate this marriage, you know,” I said, winking broadly.

“Have you got something in your eye?” she asked.

I enjoy shopping as much as I enjoy pressing scorpions into my eyeballs. Brenda, unlike so many women in some ways, is so like the others when it comes to shopping. You see them in every holiday town, breasted mammals reared up on their hind legs, skinny little arms darting in and out of clothing racks, occasionally bending down to pick something up, inspecting it, then putting it back. Browsing. Driven more by instinct than anything. Just scratching and sniffing at stuff, really.

After a while Brenda noticed that my eyes had rolled into the back of my head and she had the good sense to help me into the nearest bar and get some liquor down my throat. Thoroughly revived, I suggested we go and check out our bed. She must have misheard me, because ten minutes later I was on a boat heading across the lagoon to check out the oyster beds.

“Fascinating,” I said, glancing over the side of the boat. “Can we go now?”

The only thing that makes an oyster interesting is its willingness to give its life for you without putting up a fight. And the fact that it will never betray you. If only women were more like oysters.

Our driver turned the boat towards the Heads and gunned the engine. Brenda almost fell overboard. This was more like it.

Knysna is known not only for its exciting range of B&Bs, but also for the two lumps of rock that squat sullenly at the entrance to the lagoon.

Swiftly shucking a dozen cultivated oysters which magically appeared from inside his trousers – where one might expect to find oysters, what with them being bottom feeders and all – our driver suggested that I enter the oyster-eating contest later that day. What a splendid idea. I have a wife who thinks of fruit when she hears the word passion. I could hardly wait to spend the rest of the festival nursing a painfully unrequited priapism.

Back on land, belly distended with cheap cider, I was threatened and cajoled into a rabbit warren of an alleyway. Brenda said I needed a new coat, as if I were some kind of mangy old dog, and steered me into a shop filled with second-hand clothes previously worn by third-hand people.

I walked out with a long black garment that made me look like something out of Harry Potter. This had a terrible effect on the people in the shop next door. It was a supply store for witches, warlocks, dragon whisperers and other howlers at the moon and they seemed deeply disturbed when I walked in.

“Call me Voldemort,” I said, casting a practiced eye over their flying brooms, shamanic drums and Wiccan chalices. Then I gave them the secret Aleister Crowley sign and strode right out of that coven of quivering voodoo merchants.

I insisted that we repair at once to the nearest tavern, where a waitress with a cleft face introduced us to the day’s special – a glass of champagne and four angels on horseback for R60. Angels on horseback? I was immediately smitten. What kind of divine delicacy – what manner of celestial snack – could possibly bear such an exquisite name?

“It’s bacon wrapped around an oyster,” she said. “Do you want some or not?”

I pulled up a chair, being careful not to cut myself on the shattered illusions.