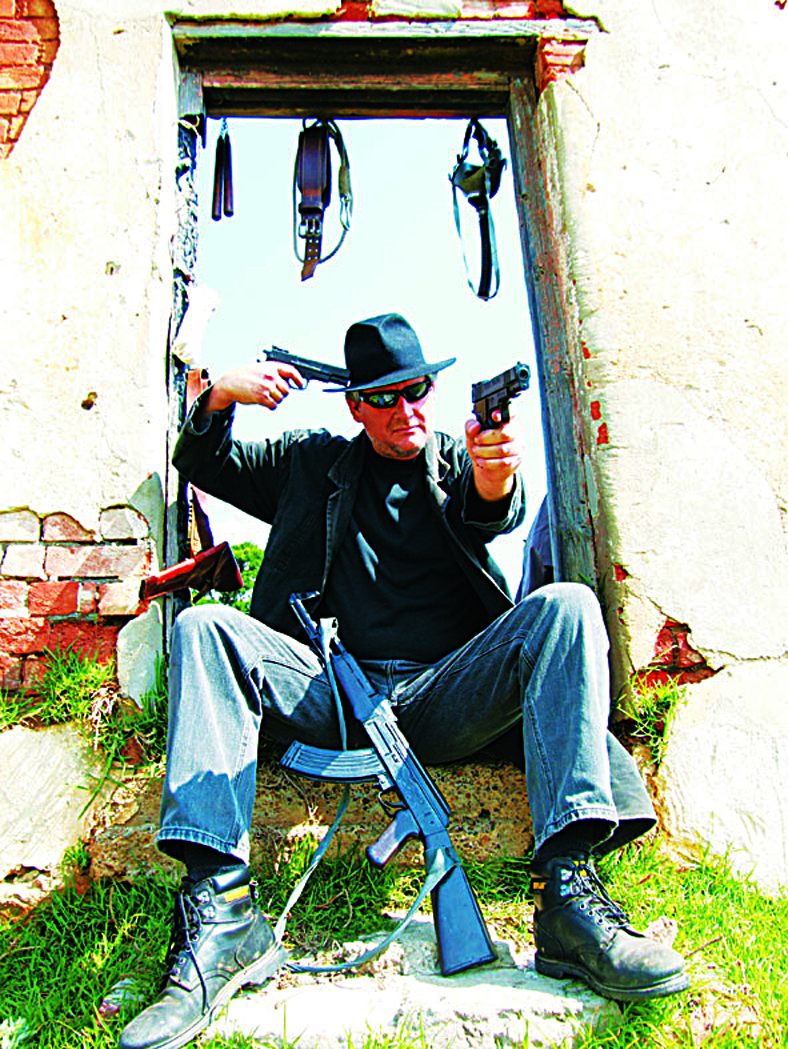 I saw a news story today about Girls on Fire. Someone should put them out, was my first thought. Risking my sanity by reading beyond the headline, I learned the story was about a marked increase in the number of women buying guns, applying for gun licences and enquiring about gun competency certificates.

Girls on Fire is, in fact, a campaign organised by one Lynette Oxley. She says it is “empowering” for a woman to have a gun and “it changes the way that you feel about yourself”. At last, a solution to all those annoying body dysmorphic and self-esteem issues.

The name Oxley rang one of those bells you hear fewer and fewer of as you get older. I put on a Hazmat suit, plunged recklessly into the archives and found a column I wrote six years ago.

Turning to Facebook for inspiration is like turning to vodka for sobriety but I did it anyway and that’s where I found Lynette Oxley. Her profile picture is of a Rottweiler looking as if he’s about to chew the photographer’s face off. That’s the fun part. She and her husband Paul run a company in Joburg called Tac Shac.

They sell teddy bears and semi-automatic pistols, shotguns and rifles that are the civilian versions of military weapons systems. Okay, I lie. They don’t sell teddy bears.

Oxley contributes to a blog called gunservant.com. The blog’s logo is, “The Truth is our Weapon.” When ‘truth’ and ‘weapon’ get together in the same sentence, it usually ends badly.

In the piece I read, she points out that the media tells us “we are under constant and violent attack by criminals”. If the only reason you think you live in a violent society is because the media tells you so, then you’re not getting attacked enough.

At least 20 people are shot and killed every day in South Africa. More guns is clearly the answer.

Oxley says the only way to level the playing field “with a man twice our size” is by using a gun. The average woman is five-foot-six. This blood-crazed mythical man would, then, be eleven feet tall. Truth? I don’t think so. Okay, fine. Hyperbole is second nature to gun groupies, so I’ll let it slide.

Oxley’s proselytising is clearly aimed at women. Actually, her contribution to this website was a tribute to Women’s Month. Let’s get started, girls. Anyone for tea and bullets … er, biscuits?

In an attack, the “Bad Guys”, as she calls them, will go for the men first. “This will give you, as an armed woman, an advantage.” This is just one of the reasons why it’s not a bad idea to have a man around the place. Actually, it might be the only reason.

“If you decide to purchase a firearm, you need to change the way you think.” I imagine you would. For a start, you’d need to stop seeing people as living, breathing human beings and start seeing them as moving targets.

Oxley has been “carrying” since 2003. If a pregnant woman says this to you, don’t assume she’s talking about the contents of her womb. Just run.

She says there’s no point having your gun locked up in a safe – it needs to be with you 24/7. One of the conditions of getting a gun licence is that you have a safe. I don’t know how Oxley gets around this. Maybe she straps the safe to her back.

Oh, right. The law simply says you must have a safe. It doesn’t say you have to keep your gun there.

She says carrying your gun 24/7 means you have to make certain arrangements. I expect she’s talking about your VGO – your visible gun outline. In the old days, women needed only worry about their VPL. I don’t know what the answer is. I’ve seen videos of women shoplifters stuffing frozen chickens up their skirts, so I imagine secreting a gun wouldn’t be much of a problem.

She does say that concealed carry would involve having to change your lifestyle and your wardrobe. I’m surprised a fashion designer hasn’t come up with a range of cocktail frocks with discreet built-in holsters for that sexy little 9mm in your life. As for lifestyle, well, I imagine you’d want to avoid those wild house parties where the men get drunk and throw the women into the pool. On the other hand…

Sensibly, she advises women against keeping their gun in their bags. Studies have shown that it takes the average woman between four minutes and two days to find any given item in her handbag.

Oxley says she carries her gun in an inside waistband holster, so if she suddenly shoves her hand down her broeks, you need to know this is not a come-on gesture. This is a go-ahead-make-my-day gesture. She also has an outside waistband holster for sport shooting, which presumably is when the mugger starts running. Firing at a moving target is always great sport.

She prefers the outside holster because she has “built significant muscle memory for this position … the gun is where my body is used to it being”. My body is used to being in the slouched-over-the-bar position and only two muscles have any memory worth mentioning.

Oxley says most of her friends “appendix carry” or carry “small of back”. I always thought the small of a woman’s back was one of their more easily locatable erogenous zones. Turns out it’s nothing more than a convenient indentation in which a pearl-handled pistol may nestle. I always wondered about that post-coital metallic taste in my mouth.

She says the size and weight of the gun should “fit in with your particular lifestyle and circumstances”. If, for example, you’re a kindergarten teacher, you might want to look at something smaller than the 1.2m Pfeifer Zeliska revolver. I suppose it all depends on how rowdy your class is.

“One of my biggest irritations are what a lot of men (I am not saying all men) think women should carry.” Typical bloody men. If they’re not trying to murder you, they’re telling you what gun to carry.

Men (not all men) seem to think their women should carry .38 special revolvers. I’d be happy if women just carried their own shopping bags.

Oxley says they’re talking rubbish. Revolvers are bulky, have bad triggers and are hard to shoot. Also, they have a lot of stoppages. They’re like the Mineworker’s Union of handguns. She suggests ladies – as she calls them – should rather go for pistols.

By now, all the girls reading this will be jumping up and down, screaming, “Okay fine! But what caliber? Tell us the caliber!” Relax, ladies. Help is on its way.

Oxley’s all-time fave is a 9mm Parabellum round rather than, say, a 380 auto/9mm short, whatever that is. My knowledge of bullets starts and ends with Black Talon and, for that, I have Oscar Pistorius to thank.

She recommends hollow-point ammunition. They are designed to expand on impact, maximizing tissue damage, blood loss and shock. Yeah! Now you’re talking. The expanding bullet decreases penetration, which is a good thing because over-penetration could cause collateral damage. Tell me about it. I’ve lost a number of bedside lamps through that kind of thing.

Oxley reminds us that firearming needs constant practice. She says handgun skills are perishable and can go off if not used. Like bananas. She suggests joining a sporting organisation such as the SA Defensive Pistol Association or the police. Kidding. The police aren’t remotely sporting. They’re quite defensive, though.

Oxley wraps up Guns for Girls 101: “I would like to urge South African ladies to stand up for themselves and take responsibility for their own safety! Don’t moan about crime – do something constructive and get yourself a firearm. Have a safe and awesome day!”