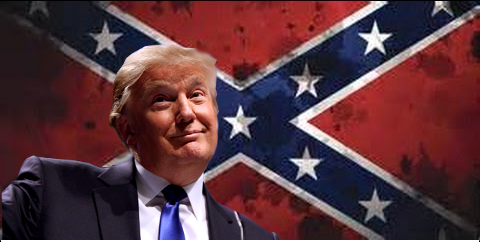 Congratulations on … well, everything, really. There is nothing you do or say that doesn’t deserve accolades of the highest order. Everything about you is so unusual that I sometimes find it hard to believe you are of the same species as the rest of us.

I see you are having a bit of trouble with the darkies. Condolences, my friend. I live in South Africa so I know what you are going through. For the first time in your life, you can quite honestly say that slavery was a terrible thing. Had it never happened, there would be no such thing as African Americans. Just Americans. Gloriously white Americans as far as the eye can see. Sure, you’d still have a few Native Americans and Latinos hanging around, but not enough to make you turn out all the lights and rush off to inspect the bunker on a Friday night.

Nasty business with that Pink Floyd fellow, no mistake about it. It’s a tragedy that it cost the Minneapolis police department four good officers. As my president would say, they let their enthusiasm get the better of them. Some say your police should be better trained. That’s ridiculous. Why would police need training? They’re not doctors. All they need is the ability to tell the difference between white and black. Nobody expects them to know that the human brain needs blood and oxygen. You need to go to medical school to learn that kind of thing. I once saw a documentary about a brain that lived in a jar. It might have been The Simpsons.

I’m disappointed that you haven’t been seen wearing military fatigues during your war against black people. Even our president, a billionaire businessman, was seen in battledress recently. Are you worried that combat pants will make you look fat? Camo can do that with a certain body type. Yes, you do have a matronly bottom, but that shouldn’t bother you. Your General Robert E Lee would never have won the Battle of Fredericksburg if he had turned up wearing one of your poorly fitting Brioni suits.

Having said that, well done on your courageous visit to the St John’s Episcopal Church, in broad daylight no less. When historians talk of General Sherman’s March to the Sea, they will in the same breath talk of President Trump’s Stroll to the Church.

Sherman marched 450km from Atlanta to Savannah. You walked 300m from the White House to the Church. That’s heroic for a man about to turn 74 who lives entirely on KFC and Oreos.

Actually, forget Sherman. He was a frustrated hippie with a baffling aversion to the Confederacy. Your tactics were similar, though. While Sherman and his liberal Unionist troops cut a swathe of destruction through the South, you had the National Guard teargas and bludgeon the enemy forces occupying Lafayette Square. The Confederate soldiers were a pushover compared to that multiracial mob of stoners, slackers and snowflakes, heavily armed as they were with deadly placards and lethal bottles of water.

Later, retreating on the offensive, you said, “MAGA people love black people.” It’s a good thing you confirmed that there is, in fact, a division between your patriotic supporters and African Americans. This is not the time to be muddying the waters. Or listening to Muddy Waters, for that matter.

Why are there so many white people at the protests? They should mind their own business, like ours do. We have plenty of protests because our government is useless and corrupt, but you won’t find our whities out on the streets throwing rocks and chanting incendiary slogans. They’re all at home watching Netflix in their bunkers.

By the way, clever of those Buffalo cops to assault that old white man. Now nobody can call them racialists. They are equal opportunity brutalists, which is a better look in these delicate times. I assume you will be awarding them the Medal of Honour.

Donald, this is not a war you can afford to lose. This is not Vietnam where you can get into a chopper and just leave. Well, I suppose you could always commandeer Marine One to whisk you off to Mar-a -Lago if push comes to shove, but you’d still be in America. If I were you, I’d sign an executive order declaring Florida an independent country. Better safe than sorry.

If you need a military strategist, I am your man. I have seen many war movies and my tactics are the best. Nobody has better tactics than me. Apart from you, of course.

Watching your war on television, it struck me that what you need is the cavalry. People are afraid of horses. Especially black people. On the other hand, I did see a posse of what looked suspiciously like darkies arriving at a protest on horseback. Maybe they were Apache warriors. In which case, don’t lose the key to your bunker. You’d have to wear a toupee if you were scalped. Sad. You have the best hair.

Listen, never mind about horses. Leave that to the British. What you really need are rhinos. I can do you a job lot of six black rhinos – make those white rhinos – that will sort out any protest in record time. Tell you what. Take a dozen and I’ll throw in an elephant for free.

Some of our officers have been watching CNN and they’ve picked up valuable new skills. We’re not even at war like you are – ours is just a lockdown situation – and already twelve or so people have been killed. Not all at the hands of the police, I should say. The army helps out where they can. Unlike in your country, very few incidents of, er, disciplinary action have been caught on camera. Probably because our insurrectionists never have airtime. Or storage. Or battery.

I think you and our police minister would get along, even though he’s black. You share the ‘iron fist in a steel glove’ approach towards law and order. Or, as you prefer to say, LAW & ORDER!!! Unfortunately we still have people in this country who don’t appreciate that policing and violence go together like, I don’t know, Stalin and purges. You can’t have one without the other.

Maybe it’s time to get tough, Donald. Unleash the F-22 Raptors. Not right away. First send in the B-52 bombers to soften them up. Is napalm still a thing? Don’t use it. The protestors will use the flames to light their marijuana reefers and once they are all high on drugs there’s no telling what could happen.

Apparently you have told 18 000 lies since you took office and are averaging 23 a day this year alone. Nice! That should get you some sort of international award. You tell the best lies. Nobody knows more about lies than you. Thanks to you, the world now knows that white lies matter.

Anyway, I hope you dominate those elections in November. My friend Ted says Joe Biden is going to win. You’ll be pleased to know that I chain-whipped him and poured Tabasco sauce into his eyes. Democracy means silencing those who disagree with us.