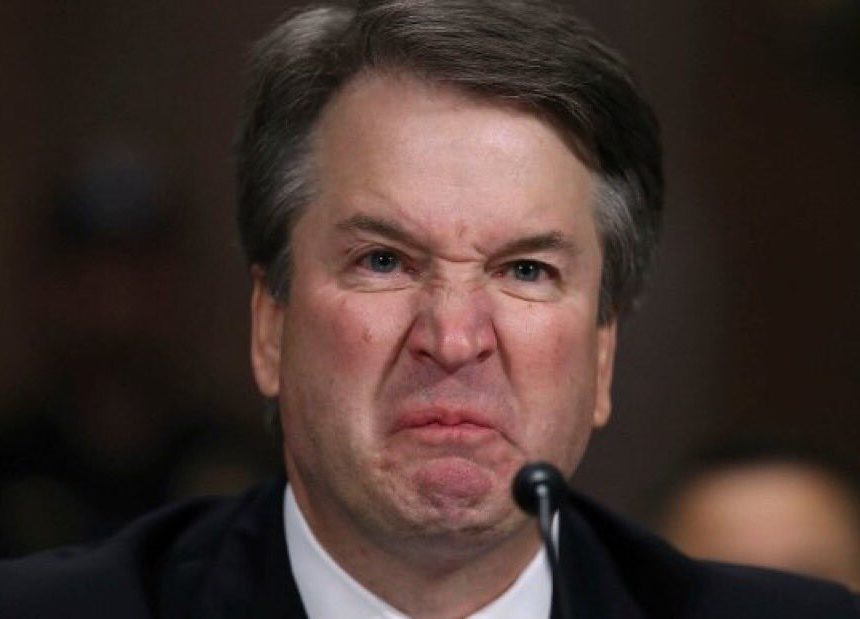 Congratulations on giving those uppity Democrats a damn good tongue-lashing at the Nuremberg trials. The only difference between then and now is that the Nazis were guilty. Well, not all Nazis.

Do you mind if I call you Brett? We have so much in common that I feel as if we’re old friends. Okay, so I’m not American. Or a member of the legal fraternity. Nor, much to my regret, did I ever sexually molest anyone when I was younger. I suppose there’s still time. Unfortunately my parents brought me up the old-fashioned way and I missed out bigly at school when it came to extracurricular activities of a rapey nature.

In a way, you were a pioneer in your field. Go Delta Kappa Epsilon! It was only years later that Donald Trump released his bestselling guide to dating, “Just Grab ’em by the Pussy.” For all I know he heard about your teenage exploits and, knowing Donald, tried to claim all the credit.

Then again, you did tell the Judiciary Committee’s hearing that you were still a virgin well into your mid-forties or something. What happened? Did you give up trying to ‘force your wors’ after that sporting incident with Dr Christine Whatshername ended inconclusively or did you simply struggle to find a girl who couldn’t fight you off. I beg your pardon. I mean resist your natural charm and boyish good looks.

My mother wanted to call me Brett but my father wouldn’t have it on the grounds that the other kids would call me Brett & Butter and throw stones at me. Has this ever happened to you? Of course it hasn’t. You don’t strike me as someone who would ever allow himself to get stoned. Motherless drunk, certainly, but never stoned.

I think you acquitted yourself very well at the hearing, considering that it was essentially an ambush laid by the enemy. You were like a modern-day General Custer getting jumped by the Arapaho. That hearing was your personal Little Bighorn.

I was astonished when Democratic Senator Amy Klobuchar – I like to think of her as Little Bigmouth – asked if there had been times when you couldn’t remember things that had happened while you were drinking. The fact that you didn’t answer is proof enough for me that you are a man who tells the truth. Obviously you wouldn’t be able to remember something now that you couldn’t remember then. Who remembers their blackouts? Certainly not me.

I do, however, think your performance could have been improved in some areas. For a start, you shouldn’t have admitted to not being perfect. You are a white man. Where I come from, that alone makes you pretty damn perfect.

I don’t know who your acting coach was, but he should’ve told you that sobbing is better than sniffing. You went too big on the sniffing and came across more as a novice coke fiend than an innocent victim of a political assassination. And the bits where you did the wobbly chin routine were almost always the wrong bits. Who gets emotional over a calendar? Or a recollection of lifting weights at Squee’s house? Play the victim card by all means, but don’t get weird.

You were at school in Maryland when this all went down, right? So, in 1649 the Maryland General Assembly passed a law enshrining the principle of toleration. Christine seems not to have got the memo. If you can’t tolerate a bit of fratboy fondling you shouldn’t live in Maryland. Granted, the law did relate to religion, but without sex there would be no religion. I don’t even know what that means. I am drinking as I write this and I can always deny writing it tomorrow. Not that I suffer from blackouts, your honour. I can easily find a lawyer to diagnose me as suffering from Wernicke-Korsakoff’s psychosis. It’s a type of amnesia caused by alcohol abuse. Not that I have ever abused alcohol.

The Maryland state motto is fatti maschii, parole femine, which literally means ‘Manly deeds; Womanly Words’. If there was any justice in this world, that would be all the defence you’d need. You committed a manly deed and … okay, this is where it gets tricky. You put your hand over her mouth, denying her the right to utter womanly words. Not that women have any business using unpatriotic words like ‘no’ and ‘stop’.

You went to an elite Jesuit school. There’s another defence right there. Jesus almost certainly got up to some pretty wild shit during the eighteen years that nobody can account for. They are known as his ‘lost years’. Sounds like a blackout to me. It’s a good thing he didn’t have the equivalent of Mark Judge in his posse or there might have been a whole book of the Bible devoted to the exploits of Jayzus O’Christ.

By the way, you did a magnificent job of throwing Mark under the bus. He was your cheerleader while you were trying to show Christine Thingy your sensitive side and is in pole position to wreck your career. What else could you do but tell the hearing that for most of his life Mark was an irredeemable alcoholic basket case who couldn’t even get it together to kill himself and is unlikely to remember last weekend. You’re a good friend, Brett. Nobody could rely on his testimony after that and I’m sure he wants to thank you in person.

Clinton-loving liberals say you told lies. That your year book reference to a devil’s triangle isn’t a drinking game, as you claimed, but rather a different game altogether involving two men and a woman. Which is not to say that drinking wasn’t also involved. Out here in South Africa, a devil’s triangle involves two satanists and a goat.

They also say your year book reference to “boofing” wasn’t, as you said, a reference to flatulence but instead has to do with inserting alcohol or drugs into your rectum. Did you not wonder why your friends kept nipping off to the bathroom for a quick fart? Were you sad that they never invited you?

And what’s going on with these other two women who have jumped onto the molestation bandwagon? Deborah Ramirez seems not to have appreciated you flapping your willy in her face while playing a drinking game at Yale. Wasn’t that the point of the game? Isn’t that, in fact, one of the perks of going to Yale? Deborah says that as a Catholic she felt ashamed and humiliated. Nonsense. Catholicism and willies go together like Donald and Ivana. Also, she’s a registered Democrat and, worse, half Puerto Rican. These people lie about everything from body counts to whatever.

Then there’s Julie Swetnick. She says she saw you at a bunch of house parties drinking heavily and exhibiting “physically aggressive behaviour towards girls, including attempting to remove girls’ clothing to expose private body parts”. Fair play to you, Brett. If nothing else, this at least proves you have stayed true to your Republican roots.

You were almost there, buddy. Your seat on the Supreme Court bench was yours. Now this. It’s so unfair. No wonder you got emotional. As for that Jeff Snowflake, the less said the better. What the hell kind of conservative worries about the way women are treated? Doesn’t he know that the moment you’re on the Supreme Court you are going to vote against anything that smells remotely of womanly issues? No more abortions. No more lesbians. No more voting.