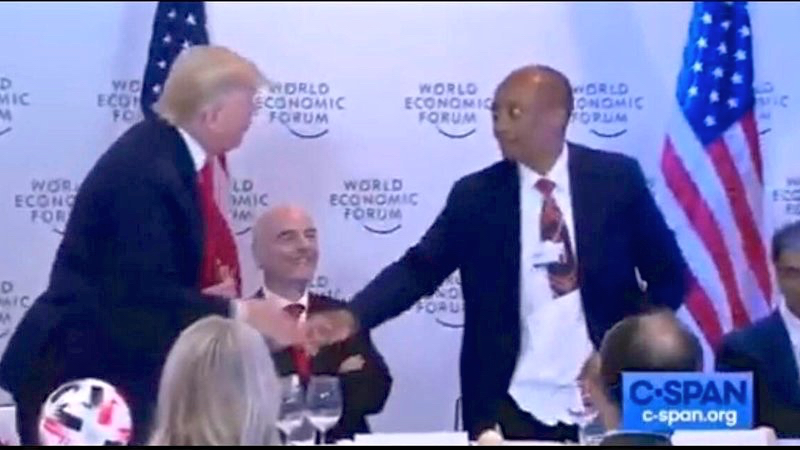 I have only just stopped gagging at the sight of Patrice Motsepe giving Donald Trump a fondle in full view of everyone at a World Economic Forum dinner in Davos.

To be fair to Patrice, you don’t get to be worth $2.6-billion without knowing exactly when and how to stroke someone’s ego to get what you want. It wouldn’t surprise me if he wrote a book one day called The Art of the Schmooze.

Also, let’s not forget that Patrice is still working his way up. He’s only number ten on the list of billionaires in Africa and just barely squeaks in to the top thousand globally. If I were a billionaire wanting to improve my rankings, I’d definitely leap at the chance to address the American president directly.

Patrice clearly knows his audience. From the time he stood up to shake Trump’s hand to the time he sat down, he spoke for just under forty seconds. It is universally acknowledged that Trump is unable to concentrate for longer than a minute unless there are colourful diagrams and a side-order of McDonalds.

In that short time, Patrice assured the most powerful man in the world that Africa loved him. Trump wondered why this skinny Congolese man was at his dinner, but it was a fleeting thought quickly erased when Patrice added that Africa also loved his country. Next to himself, money, Vladimir Putin, golf, golden showers and gilt-edged mirrors, Trump loves America more than anything.

The president’s mind swayed gently. He briefly considered shouting, “READ THE TRANSCRIPTS!” but snapped into focus when Patrice (is he Haitian?) started talking his language. Business. Now there’s something Trump can understand. And Patrice knows this. These weren’t off the cuff remarks. Patrice strikes me as a man who is nothing if not prepared for all eventualities. You don’t get to sit two down from Donald Trump at a dinner and not know what you’re going to say if you get the opportunity.

Unlike, say, me, for instance. I would have been trying to catch the eye of the waitress. Trump might not drink, but it doesn’t mean the rest of us have to suffer. My cue to say a few words would have caught me completely unawares. I probably wouldn’t have shaken Trump’s hand. If he wants that kind of treatment, you seat him next to me. Not two down.

I wouldn’t have stuck to forty seconds, either. There’s a lot of shared history to get through. For instance, both our countries divided, oppressed and exploited their indigenous populations and many of our leaders are equally corrupt. At some point security would encourage me to leave.

In a display of strategic fawning, Patrice told Trump, “We do business in 50 countries. I had the honour of being one of the 100 greatest business minds – Forbes – and it was a great honour to be with you.” He wasn’t bragging. That’s not the African way. In Africa, we don’t blow our own trumpet. We pay someone to blow it for us. And if there are competing trumpeters, we buy them off or have them killed.

Patrice was simply mirroring Trump’s style. It’s Psych 101. You know how sometimes you’ll be talking to a woman you’ve just met and you touch your hair or scratch your crotch and she immediately does the exact same thing? That’s mirroring and it means she fancies you and wants you to do unspeakable things to her.

Trump is triggered by words like mining, financial services, property, real estate. When Patrice used those exact words, Trump’s face lit up. Well, as much as anyone’s face can light up when it’s already peaking at 750 lux with a heavy tangerine filter.

Trump responded, “You’ve done a great job.” This is his go-to line for everyone from Navy Seal war criminals to Russian prostitutes.

I don’t know what Patrice made of it. Me? I clean my car out and think, great job. Take the rest of the week off. I imagine Patrice has a fair idea he’s done alright. Still. It can’t hurt to hear it from Donald Trump, who, incidentally, is only $500-million richer than Patrice. The US president is the 259th wealthiest person in America. That’s pathetic. You control the most powerful military in the world, have a senate that is treasonously loyal and own friends, family and staff prepared to lie, cheat and steal for you, and you still can’t break into the top two hundred. Sad. No wonder he’s gone insane.

The abuse continued from George Washington all the way to George Bush. Where were we meant to go? Sure, the communists helped where they could, but they had problems of their own. They were being abused by America, too. We had to find our own safe house. Somewhere we could live in peace and prosperity without having to rely on our domineering big brother. But there wasn’t anywhere. There still isn’t.

While Patrice was glad-handing Trump, a motley crew of Muslims and homegrown commies was gathering outside the US embassy in Pretoria. Something about protesting American interference in the Middle East.

Beloved Leader and Highest Incarnation of the Revolutionary Comradeship, Solly Mapaila, threatened that the alliance partners would be “organising a series of activities” at all US embassy offices.

I don’t know, man. Sounds wild on paper. But I can’t help thinking that if the Viet Cong had issued a press release announcing an upcoming series of activities at the US embassy in Saigon in 1975, America might not have lost the war. Nah. They were always going to lose.