I don’t usually do this sort of thing. “What sort of thing?” I hear you ask anxiously. Well, if you just sit the fuck down and shut up for a second, I’ll tell you.

I rarely write unless I’m paid to do so or unless there’s at least a reasonable prospect of some sort of remuneration down the line. I’m what is known in the trade as a jobbing writer. I’m also known as a you-drink-too-much writer, a you-missed-your-deadline-again writer and a this-is-my-house-and-if-you-don’t-like-it-you-can-leave writer.

It’s Friday and I had no intention of writing tonight even though I missed a deadline today. If you are a writer and you’re given a Friday deadline, you can be sure it’s a fake deadline. The person doing the commissioning hopes you’ll at least get it together over the weekend and submit the piece on Monday. It usually works.

So, since I’m not getting paid for this, I should cut to the chase so I can get back to doing nothing, for which I’m paid about the same.

An ex-girlfriend, perhaps to punish me, sent me an email a couple of hours ago that forced me to cancel my Friday night plans to not write.

It started on Instagram, where the trouble usually starts. I wouldn’t be surprised if the Syrian conflict began when Omar al-Bashir caught sight of an unflattering photo of himself posted by a disgruntled member of the Falcons of Mount Zawiya Brigade. To be fair, they are all disgruntled. However, not all are on Instagram.

This is a photograph of five schoolboys who attend Hilton College in the rolling hills of KwaZulu-Natal. One of the five is dressed up as a girl. The ‘girl’ is wearing a St Anne’s Diocesan College uniform. So far so good.

The image, not content to wallow in its own filth on Instagram, was soon winging its way across the Twitterverse causing outrage and confusion wherever it came to roost. Yes, it’s not only cows. Pigs, too, can come home to roost.

The photograph shows four laughing schoolboys dressed in Hitler’s – I beg your pardon – Hilton’s summer uniform. They are pretending to have sex with one of their mates who clearly drew the short straw. I assume he drew the short straw. Perhaps they fought among themselves for the privilege of dressing up as one of Saint Anne’s cossetted virgins. Some things are best left unknown.

Personally, I found their tight khaki shirts and shorts to be the most disturbing element of all. What the hell kind of … never mind.

Here is how one newspaper described the action: “The ‘girl’ is bent forward, with a boy up against her from behind, and ‘her’ face is at crotch level of another of the mirthful boys.”

Let us, for a moment, consider that the word ‘mirthful’ was last used in print when Dick played a practical joke on Anne. Dick and Anne are two of Enid Blyton’s Famous Five and their names dovetail rather nicely with the narrative of this terrible tale. How frightfully fortuitous.

Once the media had ensured that everyone, including Vladimir Putin, had seen this photograph, it was left to Hilton College headmaster Peter Ducasse to say how appalled he was. How appalled was he? Very. He was very appalled.

“We cannot condemn this strongly enough. It flies in the face of all that the school stands for and teaches,” he said from his office once electronic jamming devices had been installed and he had deleted his browser history.

I imagine the phone call wasn’t long in coming.

“What the fucking fuck, Peter?” whispered Dave Argyl, head of St Anne’s College, which was probably a poor choice of phrase given the circumstances.

“It’s not what you think, Dave,” whispered Peter.

I could go on but since I’m not getting paid for this, I won’t.

It was quite clear, though, that Dave was far from impressed. Like Peter, he, too, was appalled. Speaking to a bag of rags posing as a reporter, he said, “We are appalled by it. It is a slur on all women, even though it is clearly a boy in a St Anne’s uniform.”

Forget, for a moment, that Dave is referring to himself in the third person. Forget even the slur against all transvestites who might not behave in a manner that behooves a young lady of good breeding. What I can’t get my head around is that someone called Dave is in charge of St Anne’s Diocesan School for Girls.

From 1877 to 1972 the Lady Wardens were, from Miss Creswell to Miss Beer, unmarried wimmin all. There was a Mrs Morgan, briefly. I don’t know what she did, but a woman never again headed the school. Dave is fourth in a line of headmasters.

Let me just say, though, that 1977 saw the start of a tradition to wear white to the St Anne’s matric ball. This was because white represents purity and virginity, unlike, say, black, green and gold, which represents the ANC.

I’m getting off track here – which is always the danger of doing research, particularly on a Friday night – but I’d like to share with you their school song and it goes a long way towards explaining why the boys chose to apologise to St Anne’s before the rest of humanity. It’s called The Hymn of Light and it goes like this … one, two, three, four …

O joyful Light, by Whose clear shining only,

In trust we seek, and seeking find a way;

Strength of the tempted, Brother of the Lonely,

From out our darkness bringest Thou the day.

Lo having Thee, we lose not one another,

Sundered, united, dying but to birth:

All worlds are one in Thee, O more than brother,

An one our family in heavan and earth.

So shine in us, our little love reproving,

That souls of men may kindle at the flame;

The whole worlds hatred, broken by our loving

Shall bow to love,

Therefore to Thee be praise and thanksgiving

To Father, Son and Comforter Divine;

We lift our voice and sing with all things living,

O Light of life, the Glory that is Thine.

Many girls have stood in that hallowed hall and sang their pure little hearts out to this mess of mangled syntax and mixed messages. One of them was Candice Swanepoel, a sweet-faced girl who broke free, spread her wings and went on to become one of Victoria’s Secret Angels. Perhaps there is a god after all.

Where was I? Ah, yes. Bafana Bafana. The boys, the boys. Seeing the error of their ways in a dull blur of light caused by the weak Midlands sun reflecting off the letters from their daddies’ lawyers, they issued a statement. An apology. It was addressed to St Anne’s. To the headmaster, teachers, scholars and parents. No mention of the cleaners, cooks or gardeners who presumably wouldn’t be offended by this sort of thing because it’s part of their culture.

The photo, I should point out, was originally posted by Sebastian Dawber from what else but his iPhone. The caption reads, “Apparently we are ‘fuckbois’, yet they love us anyway.”

Apparently, though, they were fuckwits. Not long after the photo was emailed to the Mars Rover to ensure that other worlds would be aware of their utter fuckwittery, this came sniveling across the internet.

“We would like to apologise for our actions on Tuesday the 13 of October 2015. The manner in which your school has been portrayed due to our irresponsible and inconsiderate behavior is something we are not proud of and would like to profusely apologize for.” I’m already subtracting marks for the American spelling and dodgy grammar.

So the most important thing, right off the bat, was to apologise to St Anne’s for taking a picture of a boy wearing their uniform in a poorly staged tableaux that looks nothing like a realistic fivesome. Or so I’ve heard.

“We have embarrassed our families and Hilton College due to our unfathomable actions.” Unfathomable? Nice try, lads. That’s the Hansie Cronje defence. I wouldn’t travel anywhere any time soon by air if I were you.

Then they waste no time opening their mouths wider and ramming both feet in.

“As Hilton boys we should know better and put more thought into what we upload on social media.”

Unlike, of course, the dumb fuckers over at Uyahlanya Secondary who are somehow smart enough not to post pictures of themselves on social media pretending to bang a boy dressed as a girl.

“People understandably perceived our action in the opposite way to which it was intended …” Rookie mistake, fuckbois. Never give people the benefit of the doubt. Most of the time they can barely understand how to cross the street. You should have told everyone that this was a carefully choreographed satire of life imitating art and referred to Ayanda Mabulu’s latest depiction of the presidential penis.

Unless you’re Donald Trump, sloppy genes and too much testosterone is a career killer.

Here’s another gem. “Respect towards women and gender equality is something we hold close to our hearts. Women have been influential in all of our lives, we have nothing but respect and admiration towards them …”

Listen up, fuckbois. Unless you were raised by wolves, women have been influential in all of our lives. And if you had any respect for women, you would have put your cross-dresser on his knees and given him a cushion to kneel on. Next time be more sensitive.

The names attached to the apology are instructive. Murray ten Hope, Sebastian Dawber, Bonani Beebz Komani, Reece Lambson and Tristan Way. Murray appears to be of Dutch origin, a degenerate nation that came over here, spawned Afrikaners and then went home to shag whores and get high.

Lambson, Way and Dawber will recover from the scandal and go on to start a law firm specialising in whatever makes the most money.

The photograph itself tells a story, too. There is only one person there who looks like he knows what he’s doing and that’s the acceptably light-skinned Bonani Komani. The white fuckbois look like they’re auditioning for the school play and the boy in the St Anne’s outfit appears to be looking for a contact lens. Fucking amateurs.

The mea culpa ends with yet another apology. “We hope that in the near future we will be able to prove that this does not show who we are or what we represent …” What exactly do you represent, fuckbois, apart from the elitist wanker demographic?

You call this “an unfortunate and thoughtless event that occurred because of nothing else other than our stupidity”. See what you’ve done, now. Your mothers and lawyers have gone and over-egged the pie or whatever the fuck it is that you put eggs into.

It costs R200 000 a year to go to Hilton. You cannot publicly admit to being stupid when you attend the most expensive private school in the country. Unless, of course, you really are that stupid.

Lastly, the next time you pull a stunt like this, don’t look at the fucking camera. 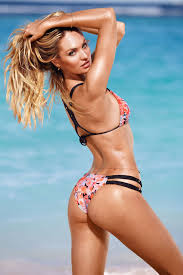 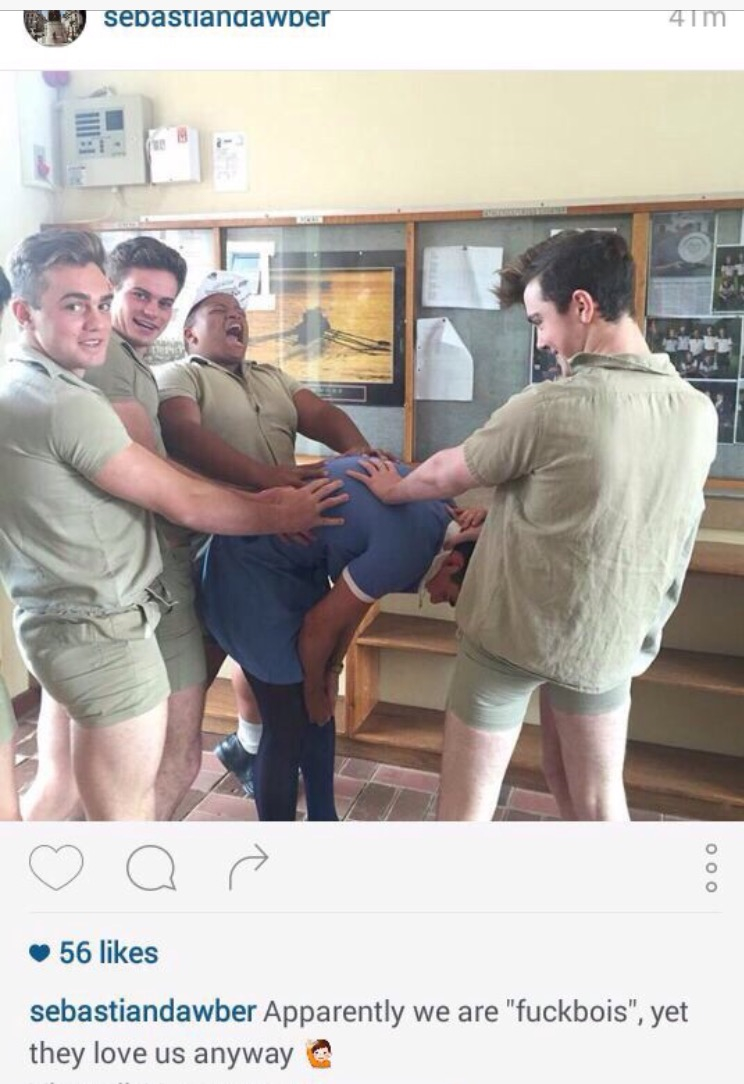 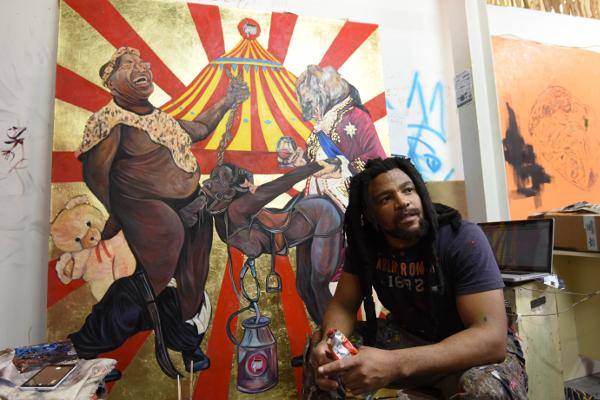