My house looks like the goddamn American embassy. Okay, so I might not have the triple-locking steel doors, bombproof windows, surveillance cameras, evacuation plan, leery staff and heavily patrolled parking area – but I do have the Stars and Stripes flying from the roof and Barack Obama’s seraphic face plastered across every surface.

Under normal circumstances the flag alone would have made us a prime target for the local al-Qaeda cell, but I see their curtains are drawn and the BMW X5 is not in the drive. They must still be away. I recall Mrs Abdul-Majeed telling Brenda they were going to Plett for the holidays.

Brenda and my increasingly eccentric loinfruit, Clive, are in love with Obama, hopefully for different reasons. Brenda says it is because of his moral fibre, but I suspect it’s because he thinks like a white man and is hung like a Maasai warrior.

Obama is Clive’s hero because, in the words of the brat, “he is a shining beacon of hope in a world full of despair”. I picked him up by his ear and demanded to know who taught him to speak dirty like that, but he refused to reveal his sources. Probably got it from a left-wing pornolitical rag like Newsweek.

“If it’s because Obama is black,” I shouted, “let me remind you that Idi Amin was also black.” I tossed out a few more names of darkies who were once shining beacons of hope. Mugabe. Mobutu. Mengistu. Mswati. Moi. “And those are just the ems,” I said.

The madness started last Sunday night with a concert at the Lincoln Memorial in Washington, DC. It was quite a spectacle. Denzel Washington reminded everyone of how far America had strayed from the path of righteousness, while Samuel L Jackson, wearing the latest in 5th Avenue rebel chic, mixed up some 23rd Psalm with a little Ezekiel 25:17 before taking out a pearl-handled 9mm Star pistol and opening fire on the crowd.

When Josh Groban took the stage, I covered my ears and said: “Where’s that damn lone wolf assassin when we need him?” Brenda threw an empty beer bottle at me. I deflected it and it bounced off Clive’s head. He barely noticed, so enraptured was he by the shameless display of naked patriotism going on in Washington.

Some lard-assed redneck by the name of Garth Brooks almost sparked the biggest line dance in history by yeehawing on about them good ol’ boys drinking whiskey and rye. Obama stopped singing along when Brooks reached the line, “This’ll be the day that I die.”

After all, most of America’s good ol’ boys were at that very moment not only hitting the whiskey and rye, but were also oiling their rifles and wondering how to get a fertiliser bomb to the capital without it going off in the back of the pick-up.

For me, the highlight came when the announcer said, “Ladies and gentlemen, the Bald Eagle.” I expected Obama to stand up. Ronald Reagan’s Secret Service code name was Rawhide. George W Bush’s was Idiot. But Obama wasn’t Bald Eagle. It wasn’t even code. Instead, a lumberjack appeared with America’s national emblem lashed to his wrist.

I was the only one who fell about laughing when the eagle tried to take off and then flapped about helplessly like a trussed-up Transkei chicken.

Obama said a few words, causing Brenda to blush and whimper softly. Clive fell to his knees and clutched his heart. I thought he might be having a cardiac arrest so I pushed him over and pummeled his chest until he wept with gratitude.

The crowd went wild when Obama said, “Anything is possible in America.” They cheered even louder when he added: “Anything, that is, apart from giving Ben Trovato a green card. That’s not possible.”

Fine. I didn’t want one, anyway.

The dramatic denouement came when 135-year-old Pete Seeger, propped up by Bruce Springsteen, shuffled on with a banjo in his hand and a sock on his head. He began singing a 1944 Woody Guthrie song and my eyes filled with tears. Tears of laughter.

I woke early, around lunchtime, and switched to CNN. They were showing live pictures of a city at dawn. “Hurry up,” I shouted to Brenda. “They’re going to start bombing any moment now.”

But this was no war. In terms of sheer magnitude, this was an event second only to the confirmed sighting of Elvis and Jesus walking arm in arm down the Champs–Elysées.

Out on the National Mall, a million people dressed as Eskimos were in the grip of some kind of neo-religious fervor. Their eyes were rolled back in their heads, their hands shook and they babbled in tongues. Maybe that was just the cold. And their accents.

It was America’s biggest-ever concentration of black people outside of the country’s prisons and yet there wasn’t a single mugging. So much for the propaganda.

“At midday, a black man will become the most powerful man on the face of the earth,” said a US congressman, causing white supremacists everywhere to soil their trousers and reach for the whiskey and rye.

At some point, the Obamas stopped off at the White House to deliver an eviction notice to the Bushes. Laura looked like a pink popsicle on Prozac while George was smiling as if he knew something the rest of us didn’t, which, as we all know, he doesn’t.

Bush’s trigger-happy factotum, Dick Cheney, refused to go quietly and Secret Service agents were forced to break his legs and take him out in a wheelchair. See ya, bubba.

Apart from Obama fluffing his lines, the inauguration went off without a hitch. One fawning supplicant stopped hyperventilating long enough to describe the occasion as, “Mind-blowing … a secular version of a miracle.”

I went into the garden to make room for more beer and while I was throwing up, Brenda shouted: “You’re missing Yo-Yo Ma!” I rushed inside expecting to see a gold-toothed gangsta from the Bloods rapping about payback time but instead found a middle-aged Chinese nerd strumming his cello.

“Yo-Yo Ma se poes,” I said, going back outside to finish emptying my stomach.

After the inauguration, George W Bush was escorted to a waiting helicopter. I was deeply disappointed. He should have been stripped naked and made to crawl out of Washington on his hands and knees. Mothers who had lost their sons in Iraq and Afghanistan could have taken turns riding on his back, whipping his flabby white buttocks all the way to Texas. 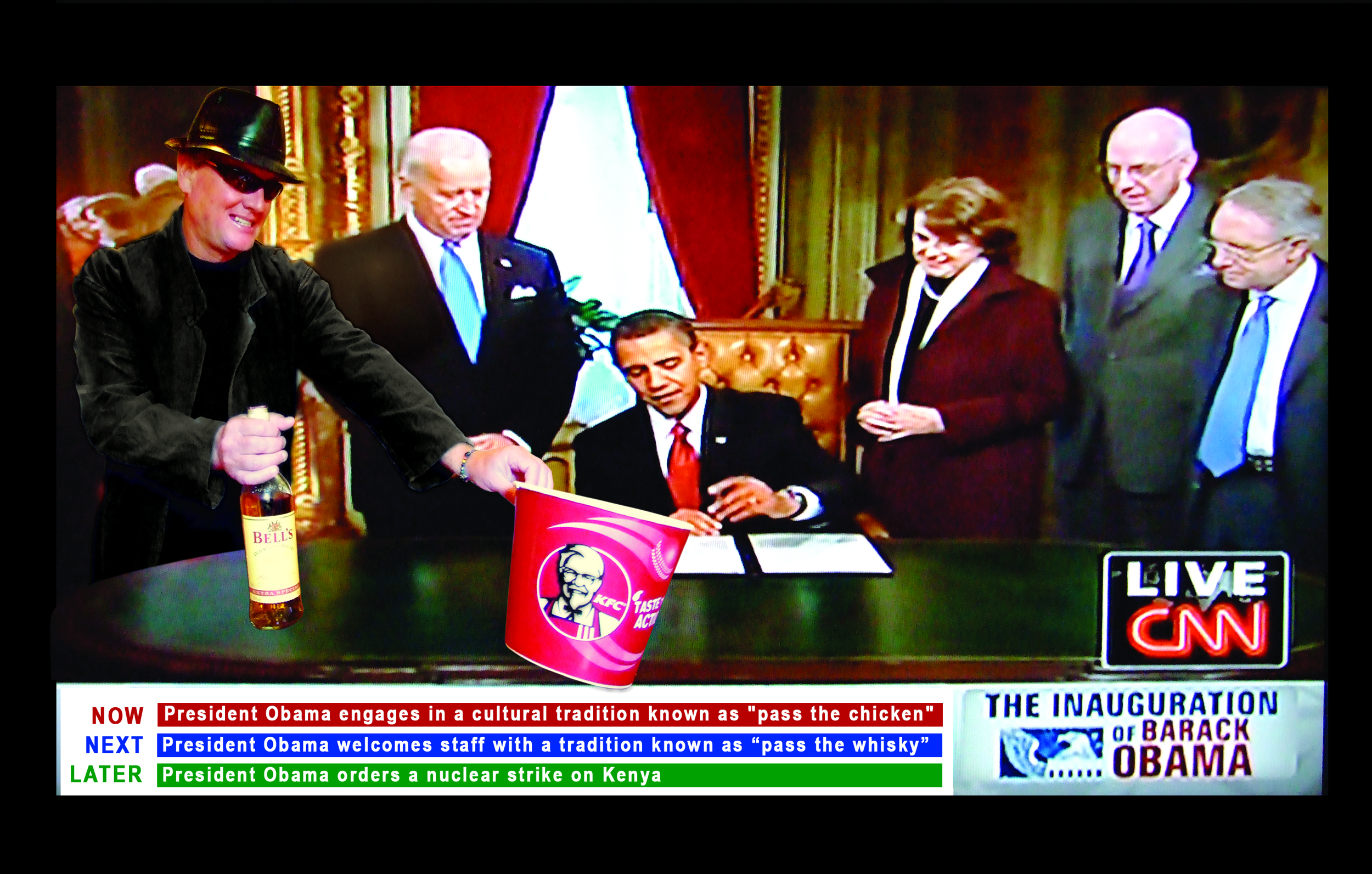