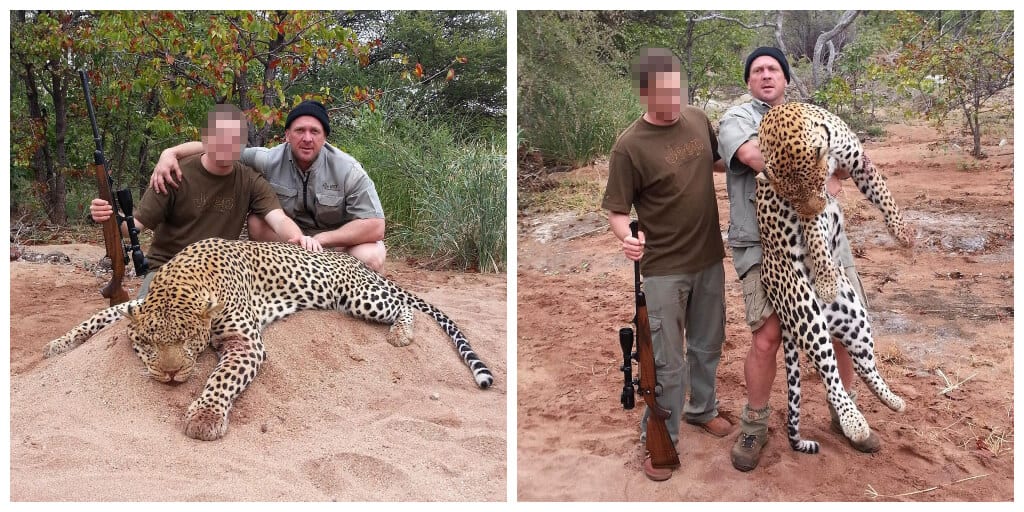 When I got wind of your courageous exploits, I felt I had to congratulate you. For a start, you are British. We adore the British – they are our second favourite colonialists. The first, obviously, are the Dutch. They gave us the Afrikaners who in turn gave us apartheid. What’s not to love about apartheid, right? Was that the reason your parents moved to South Africa in 1980?

Your efforts to encourage tourism to South Africa in these fraught times are laudable, indeed. It’s not easy these days to find a Brit who is interested in anything other than Brexit and that tawdry harlot, Meghan Markle.

Even though you’re only 46 and hail from Epsom, Surrey, you have your very own company operating out of Johannesburg. It’s called Take Aim Safaris. At first I thought it might be another of those bunny-fondling outfits that think the best way to shoot animals is with a camera. Ha! Poor fools. Unlike you, sir, they have clearly never cradled a 300 Winchester Magnum in one arm and a high-class prostitute in the other.

And you named your eldest son Hunter! You wouldn’t expect a man who enjoys shooting animals in the face to have a sense of humour. Well done.

You spotted a gap in the market. As the plague is still very much with us, people are understandably reluctant to travel. That’s until you reminded them that with fewer hunters around, wild animals have been breeding like, well, wild animals. You can barely walk anywhere in South Africa right now without bumping into an elephant. 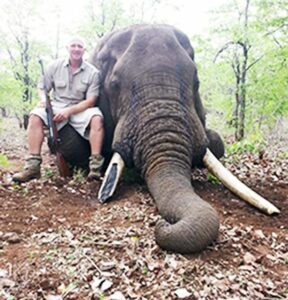 So you fired off a newsletter to 3,000 of your clients around the world encouraging them to come here and kill a bunch of stuff for sport. And what a sport it is! Okay, maybe not so much for the animals, but they don’t pay taxes and won’t be missed.

You wrote, “Big elephant and trophy buffalo + hippo, croc are plentiful. The areas are well rested, the animal movement is fantastic.” Let’s see how fantastically they move with a 5.56-caliber bullet lodged in their brain haha.

“I have quota available on the big cats: leopard and lion plus elephant bulls at unbeatable prices.” This is great news. I have never trusted an animal that can’t change its spots. Leopards are duplicitous, violent brutes and I am delighted to hear that they are now on special. Lions, too, will pretend to befriend you, then have your throat out just for the sport of it. They are cats, after all. Did you know this? Or do you simply judge everything with four legs according to the price tag on its hairy ass? Fair enough. 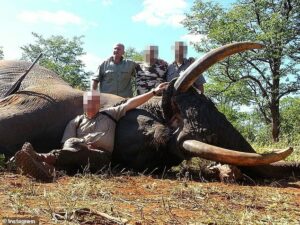 Some of your prices do seem a bit steep. $8 for a guinea fowl? Leave a trail of breadcrumbs into your oven and they’ll cook themselves. $150 for a mongoose? Can’t be much left, especially if you’re using hollow-point ammo. And $75 for a vervet monkey? Daylight robbery, that is. Porcupines are priced right at $300. Even though it’s more of an execution than a hunt, you could still get a quill in the eye if you were very drunk and had to fall on him. 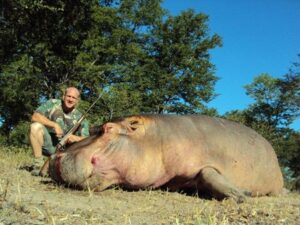 I love that you hunted for a Christian drug rehab in the Northern Cape when you were younger. You gave them more meat than they knew what to do with. That’s a David Lynch movie, that is. Produced by Oliver Stone. Featuring a young Sylvester Stallone as you.

You’ve hunted all over – Mozambique, Botswana, Zimbabwe … you even shot a bear in Russia. I suppose he didn’t understand when you shouted, “Hands up! Don’t move or I’ll shoot!” You also said Namibia is a great place to hunt.

“Namibia reminds me of South Africa 30 years ago with its low human population and massive open spaces.” Yep, there was hardly anyone living in South Africa in 1991. An easy mistake to make, what with 40 million people being tucked away out of sight. As for the massive open spaces, well, you had the Group Areas Act to thank for that. 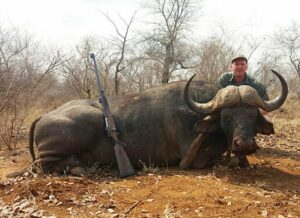 The magazine asked what’s your favourite animals to hunt and you said, “Dagga Boys!” What? That was the name of my gang when I was growing up. But you were talking about something else. “Such an exciting hunt … it’s kill or be killed when you’re hunting buffalo.” So you engage in hand-to-hoof combat with these brutes? Respect, bro.

Our president is also into buffalo in a big way. Mainly for breeding purposes, though. No, I don’t mean … never mind.

Your greatest trophy was the buffalo you hunted with your dad in Mozambique. “It was, and remains, the fulfillment of a father and son dream hunt in a perfect environment.”

My greatest trophy was for tennis in Standard 8. It was tiny but I was very proud. My father never taught me how to hunt. Instead, he taught me how to play pool. The thrill just wasn’t the same, although people did die in some of the pubs he took me to.

You talk fondly of the “38-inch bull in Mozambique that put me firmly on a path I’m still on”. That’s, like, just over a metre? What kind of small-ass bull is that? You might as well have kicked him to death. Anyway, what do I know. I’m sure you believe your wife when she tells you that size isn’t everything.

So the hippo-humpers are saying that many of the animals on your list are endangered. This is nonsense. There are around 400 000 African elephants left in the wild. If you shot a hundred a day, they would last for ten years. That’s not exactly endangered in my book. 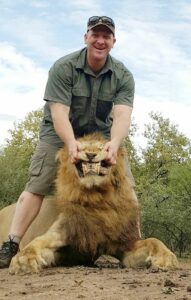 There are also 20 000 lions roaming about off their leashes. That’s more than enough lions for everyone. You can get through five a day at least, maybe more if they stop hiding up trees and in cardboard boxes. Sure, their numbers have plummeted by over 40% in the last three generations as a result of hunting, but our national IQ has dropped 40 points in three years as a result of bad education and too much CNN and you don’t see us shooting our stupid people, do you? Damn, this stuff is strong.

Where was I? Oh, yes. You charge £10,000 to shoot an elephant? That, my friend, is a small fortune in my pathetic currency. And £14,500 to put a bullet into the back of a lion’s head? That’s way too much. Are you on drugs? Tell you what. I’ll give you R10 000 for two baby elephants, three monkeys and a crocodile. You do mix-and-match packages, right? And you do pay your taxes, right?

I see you have lived in Joburg for almost your entire life. It’s completely understandable, then, that you would want to kill everything in sight. And you’ve been organising assassinations ever since 2008? Nice work if you can get it. 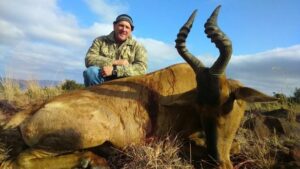 I see those gerbil-suckers over at MailOnline have been questioning your ethics. How very dare they. You told them, “We eat what we hunt … we love and conserve animals.” I’ve often wondered what elephant tastes like. Tough, I imagine. Do you make carpaccio out of the leopards? That would be a winner among the Italians.

You also told the running dogs of the media that “I have broken no laws”. Good one, mate. You and me and Jacob Zuma know it’s impossible to break laws in this country. Well, you can break them alright, but there ain’t jackshit gonna happen to you.

That bastion of truth, The Mirror, asked how you felt about the dwindling number of wild animals in SA. You said they were lying, which they obviously were, and said, “In South Africa we have over 20,000,000 wild animals bred and conserved here. The birth rate per annum is around 3,000,000.” You might want to check your science, son. I think you’re talking about our people, here. 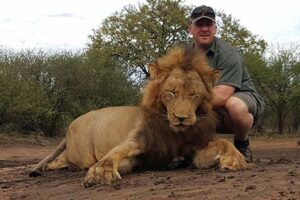 By the way, my friend Ted said you look like a bit of a cunt. You’ll be pleased to know that I had one of the servants horsewhip him soundly. Your name is Knight, for heaven’s sake. You’re a member of the realm. And I do mean member.

I liked the way you wrapped up your interview with that hunting magazine: “For my family and I, there is no life without God.” There’s a rich vein of irony in there somewhere.

Did you know that if your Boris Johnson had kept his word and implemented the ban on trophy imports pledged in his election manifesto and repeated in the Commons last year, you’d be back in Surrey organising weasel hunts by now?

Our president also has trouble keeping his promises. Politicians, eh? Long may they lie.