There has been considerable speculation about why the head of the UK Supreme Court, Lady Brenda Hale, wore a large spider brooch when she read out the judgement declaring that Prime Minister Boris Johnson had acted illegally when he shut down parliament for five weeks. 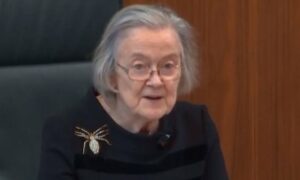 The best explanation came from a friend of mine, Leanna, who said it was obviously a reference to an obscure 1966 song by The Who.

2 thoughts on “Boris the Spider”