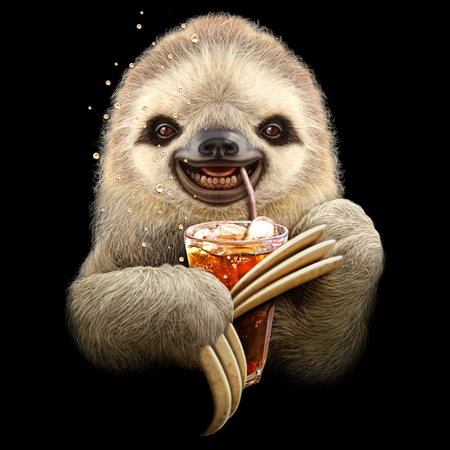 Well, this is a birthday I won’t forget in a hurry. It’s quite a milestone, too. Not to mention a millstone. I’m not even supposed to be here. I’m meant to be on a remote jungle-fringed beach in Costa Rica drinking a guaro sour with a sloth in my lap.

I bought my ticket on 6 February. Five weeks later, Lufthansa grounded my flight. I blame Donald Trump. At the time I made the booking, there were already eleven cases of Covid-19 in the US. What did this monstrous aberration of a human do? He went golfing. He could have alerted the world that trouble was on its way, which would have made me think twice before spending my life savings on an air ticket.

I also blame China, God and my daughter, who is currently on lockdown in Costa Rica. Come over for your birthday, she said. It’ll be fun, she said.

Now look. No guaro sours. No sloths. Just me playing achingly sad love songs while wrapping an old Swazi candle in newspaper so that I have something to open at the surprise party I’m having for myself this evening.

So who was it? Which one of you privileged dog-walking, bike-riding, jogging narcissists was responsible for making our president extend the lockdown? I know it wasn’t me. I haven’t been out in thirteen centuries.

My suburb is tightly locked down. There are snitches and curtain-twitchers in every second house. Nobody dare leave their home for fear of being named and shamed on one or other neofascist community WhatsApp group. Five kilometres down the road, the streets of the township are as busy and festive as ever. Fair play to them. I’d break a lot more than lockdown laws if I had to live in those conditions.

Life is turning into a cross between Survivor and The Hunger Games. On Survivor the tribes compete in challenges to win immunity. Here, we can’t get immunity unless we are infected with Covid-19. And we can’t get infected unless someone who already has the virus sneezes into our open mouths. But sneezing has been banned. We are also not allowed to show our mouths in public. Smoking, drinking and gambling is forbidden and police are flogging people in the streets. I think it’s safe to say that the Islamic State has accomplished at least some of its goals.

I don’t know what happens in The Hunger Games because I’ve never watched it, but presumably it’s set in a dystopian post-apocalyptic future where starving people hijack pastry delivery trucks and fight each other to the death over pre-heated steak and kidney pies. So, nothing like us then. We’re still pre-apocalyptic. Although there is a worrying pie connection.

I don’t panic easily, but I have to say that I am beginning to get a little concerned. Not about the virus. This birthday has made me realise that I am more afraid of not living than I am of dying. Time is not on my side and there are things I still need to do. Things that can’t be done while I am shut inside my house. Things that involve guaro sours and sloths and going further than Checkers once a week.

The portents are ominous. It’s almost as if, on or about April 15, aliens abducted the entire cabinet and replaced them with robotic replicas lacking only the capacity for logic. It’s like something out of Westworld, but in this never-ending episode, liquid LSD leaked into the hosts’ circuit boards and they are now randomly changing narratives for no apparent reason.

Last night I took a horse tranquilliser and tuned to CNN just in time to see an American doctor say, “We don’t even know what we don’t know.” I’m gonna need a bigger tranquilliser. Elephant, maybe.

A few days ago, a motorist was arrested for trying to smuggle his girlfriend out of Gauteng and into Mpumalanga. She was hiding in the boot of his car and was also arrested. I can’t say what movie this reminds me of. I don’t think it’s been made yet. Nobody would believe it. Bladerunner, maybe, except this wasn’t a pair of violent replicants on the run. It was just a dude trying to get his girl back to his place for the lockdown. Do androids dream of electric sheep? We might never know.

Here’s another. Same day, different headline. “Roadblock cops arrest man in possession of dagga worth R250k.” How is it the police don’t know that arresting this man is not in their best interests? Did they not learn at police school that in times of a pandemic, it is better to allow the general populace to remain as high as possible? Stoners don’t want to go outside. Ever. They just want to sit in a comfy chair, eat snacks and watch cartoons. You take their weed away, they’re going to be out there in the streets. Not doing much, admittedly, but they will be violating the lockdown. Which means they will have to be shot. Rather let the weed get through and save the bullets for those who really deserve it.

South Africans are patient to a fault, but there will come a last straw. I thought it might be when the government banned supermarkets from selling rotisserie chickens and other lightly warmed comfort cuisine of that ilk. Thing is, the kind of people who buy chicken pieces or samoosas or vetkoek come from all walks of life and it would be difficult to track them down and get them to rise up and overthrow whatever it is that needs overthrowing, whether it be tables, laws or even the government itself.

I want us to become the first country to have a coup d’etat because the government denied its people their right to roast chicken. That’s the kind of country I’d be proud to live in. And when we won, which we would because we of the Chickenista National Liberation Front are smarter than the enemy, we’d hoist our flag over the Union Buildings and it would feature the mother of all chickens, rampant, in all her insurgent glory. Viva the Chickenistas!

It won’t have escaped the government’s notice that murmurings of civil disobedience are emerging from among the chattering classes. This is a good sign. This could be our 2010 World Cup all over again. Race, creed, religion, gender and language, united as one. It’s what the ANC always wanted, right? Okay, they didn’t expect us to unite against them necessarily, but it’s the unity that counts. There is a movement building. Perhaps, once you have clapped for the healthcare workers in the evening, you can be like Howard Beale in Network and shout, “I’m as mad as hell and I’m not going to take this anymore!”

Meanwhile, the lockdown is causing some interesting throwbacks to a kinder, gentler time. The Phoenicians were one of the great trading powers in the ancient world and this lockdown is bringing out the inner Phoenician in many of us.

A friend came around the other day to barter a bottle of her Red Heart for my Gilbey’s. She had dyed her hair to avoid being recognised by the local snitches. It looked like a dog had eaten a rainbow and thrown up on her head. I tossed in a couple of lemons and a bottle of tonic. She definitely got the better deal.

Trade is breaking out all over. And not just for alcohol either. There’s chocolate being exchanged for cigarettes, shoes being swapped for weed … an entire alternative economy is developing. We might not even want to go back to money when this is over.

Briefly returning to the pandemic. Some countries say that aggressive testing is key to reopening the economy. We’re a bit slow on the testing, but damn, we sure do the aggressive part better than most. Will that do? Can we come out now?

9 thoughts on ““Fuck this” – The tribe has spoken”