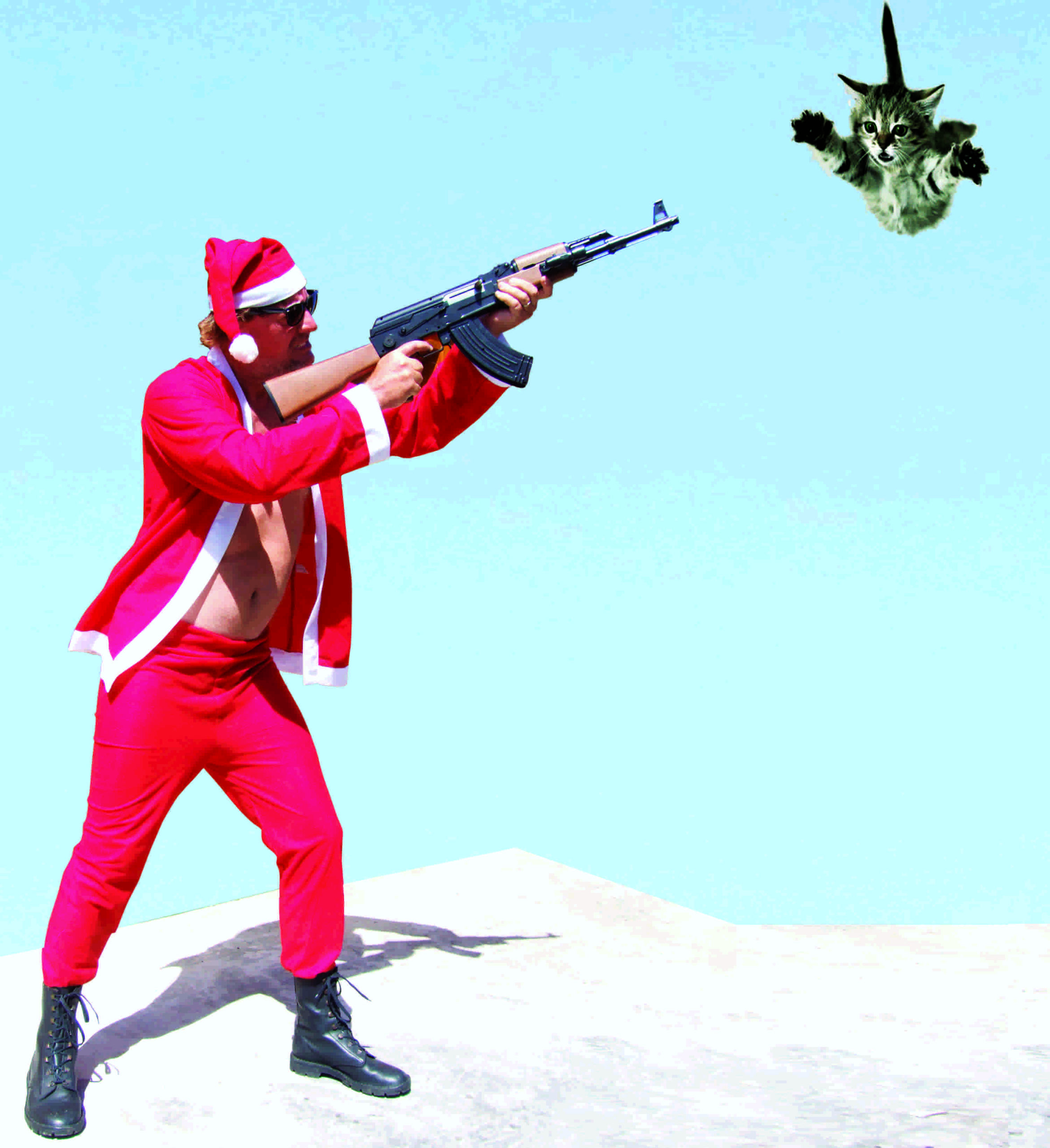 Since we’re all relying heavily on memories and reminisces to stop us from reaching for the razor blades, here’s a flashback to a Christmas past.

Home for the holidays. It sounds like such a benign, cheerful concept. Yet it is only once you are there that the occasion mutates into a short-term psychological evaluation in an institute for the criminally insane.

In my case, the institute is located in a Durban suburb. In defiance of convention, it is the criminally insane who presume to evaluate me, the son and heir to the family fortune which, I discovered, fits snugly into the back of my car.

The last few days have taken a terrible toll on me. I arrived in Durban with a song in my heart and a spring in my step. I left on crutches, wild-eyed and half-mad from lack of sleep.

If you want to see where I grew up, log onto Google Earth and hover above Durban North at a height of around 2000m. See the beautiful homes with sparkling pools and carefully manicured gardens? Keep looking. There it is, over on the left. But that’s just a patch of bush, you cry. And well may you cry. I did, too. For most of my childhood, friends were banned from coming over to play. Their parents wouldn’t allow it after little Sydney Taverner disappeared in the garden. He was found three months later living off dove eggs and rainwater. He never recovered and today he rides with a biker gang and goes by the name of Psycho Syd.

My parents have been in the same house for 47 years. I find this almost as disturbing as having to use a machete and a GPS to get from the gate to the front door.

I don’t come from a big family. One sister. I probably had other siblings once, but I expect they crawled into the garden as babies and were never seen again. It wouldn’t surprise me if I were genetically related to half the stuff that’s growing there. Not girly things like ferns, obviously, but certainly some of the taller, good-looking trees.

My father converted my bedroom into a study the moment I moved out, even though I warned him I would be back. I remember him saying there would always be a bed here for me. Then he dragged my bed into the garden and set fire to it.

This festive season I slept on a mattress in a section of the house where intruders regularly start their day by picking through the remnants of my inheritance.

“If you get your throat slit, try not to bleed on the carpet,” said my mother, her eyes twinkling with the Christmas spirit. By 3am I was praying for a quick death. Successive raids by mosquitoes the size of humming birds made sleep impossible. It was worse than Pearl Harbour. And when the mosquitoes lumbered off to digest my blood and regroup for the next wave of attacks, swarms of over-excited fruit bats began shrieking and yelping outside the window. If they can’t see properly, they shouldn’t be flying in the first place. They should rather walk or hop, like the giant toads that were now contributing to this hellish chorus.

Then, around 4am, everything went quiet. Hysterical with fatigue, I cried myself to sleep. Almost. From the kitchen came a terrible gnawing and crunching. It didn’t sound like the dog eating something. It sounded like something eating the dog.

Armed with a Madagascan conch shell, I edged down the passage with murder in my heart – a heart that almost stopped when I bumped into my father who was also edging down the passage in what little remained of his underpants.

“There’s something evil in the kitchen,” I hissed. “Don’t worry,” he said. “It’s just the rat.” He took my arm and led me back to my mattress. The gnawing subsided. Dawn began to break. I started dozing off. This was the moment the hadeda was waiting for. A hadeda is the antichrist of the avian world. He stands waist-high in his socks and has the voice of a Catholic nun possessed by the devil. He also has a lethal weapon for a beak, long enough to plunge into your eyeball and suck out your brains. They rarely do this, however, but only because they can’t shut the fuck up and everyone hears them coming from a mile off.

Over breakfast the next morning, I inquired about the rat. It turns out that a few months ago my father began leaving tasty little snacks out for him at night. Then he met a lady and started breeding. The rat, not my father. It wasn’t long before Dad was spending his evenings making rat starters, rat mains and rat puddings. Mom put her foot down – not on the rat, because in my family nothing ever gets killed – and now they are using some kind of high frequency electronic device that is meant to encourage rodents to pack up and move next door. Their rat loves the sound and he hosts rave parties that go on late into the night.

When I was reprimanded for not sharing my fruit salad with the monkeys at breakfast the next day, I knew it was time to fly back to Cape Town.

I always try to choose a woman to do my checking in at the airport because I stand a better chance of winning her heart with my insouciant charm and boyish good looks. Being a 1.93m tall claustrophobic misanthrope, it is vital that I get a seat capable of accommodating my legs. Sadly, women are not what they used to be. To put it bluntly, charm and looks count for nothing. If you have a willy, you’re a bastard and should be tossed into the hold along with your suitcase.

Perhaps I should be seeking out the gay check-in attendants. However, I am unfamiliar with the secret codes and signals that homosexuals use when they want to be seated at one of the emergency exits.

When it was my turn to check in, I smiled, wiggled my hips, batted my eyelids and used every bit of body language in my repertoire. The check-in person asked if I was suffering from cerebral palsy. Stupidly, I said I wasn’t. “In that case, sir, we only have middle seats left.”

A kid with the face of a juvenile bull terrier had the best seat in the plane. He lay back and stretched out his pudgy legs, chewed gum and nodded along to his iPod. I offered him R100 to swap seats and he looked at me as if I were some kind of low-rent hustler who had no right to even be on the plane. I should have gone to the galley and slipped four grams of ketamine into his orange juice, then taken his seat when the seizures began.