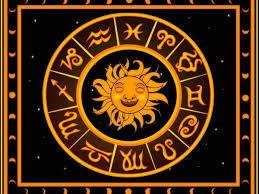 After a close encounter with a celestial body on New Year’s Eve, I had an epiphany so powerful that I had to go home and change my broeks. It was downhill from then on.

All indications are that 2019 is getting itself off to a very suspicious start. On Thursday next week, Scorpio enters Venus. They barely know one another. How I miss the golden era of the Big Bang. There was a sense of propriety among the astral bodies that is sorely lacking today.

It gets worse. Pluto will be doing unspeakable things to Uranus in February. If you are of a sensitive disposition, you may want to avoid looking at the night sky next month. And keep the children inside.

Having recently spent a night or two on my back at the bottom of the garden, I am something of an expert in the ancient art of astrology as interpreted through the abominable wretchedness of alcohol poisoning. Here, then, is your Horrorscope for the year ahead.

Aries – This is a fire sign, but you probably don’t need reminding because ever since you were little, people have been telling you not to play with matches. The good news is that this is your year to burn stuff. Don’t hold back. It can be anything from parking fines to office blocks. When the police try to arrest you, tell them you are astrologically impervious to their authority since you are governed by Mars alone. If they are fellow Aries, they will understand. If they aren’t, set them alight and run away.

Taurus – Your element is Earth. This year you are entitled to behave as if you own it. Get drunk and disorderly, drive slowly in the fast lane and park in handicapped bays. You are ruled by Venus and not, as you have always thought, your penis. Your symbol is the Bull. Act accordingly. Attack people who wear red and, when angry, paw the ground and snort loudly. On the career front, you will lose your job but will find happiness in other things. Heroin, mainly.

Gemini – Nobody likes a Gemini. Not even other Geminis. Your element is Air, which, quite frankly, is ridiculous. Your symbol is The Twins. Nobody trusts twins. Your ruler is Mercury, a gay little fellow who flitted around the heavens gossiping about Aphrodite banging half the pantheon and how wasted Dionysus got at last Saturday’s bacchanalia. This is the year you shut up for a moment and give someone else a chance to talk. Divorce is on the cards. The bad news is that you will marry again before the year is out.

Cancer – You killed my mother a few years ago, you cold-hearted bastard. Because you are governed by the Moon, you cannot help carrying on like a lunatic. This is the year your aberrant mood-swings drive the last of your old friends away. You will soon make plenty of new friends and share cold showers and long walks around the exercise yard. When you are released, you will emulate your astrological symbol and approach matters in a more circumspect way. Your manner of walking in a crablike fashion attracts the wrong kind of attention and you end up with the Crab People who have been living in the Earth’s crust for thousands of years waiting for an opportunity to take over the world.

Leo – Your ruling planet is the Sun. So, to your discredit, is your favourite newspaper. Much like your symbol, the Lion, your pride often stops you from straying into unchartered territory. You are compatible with anyone as long as they have their own transport, money and functioning genitals. Driven mad by your unrelenting good humour, a family member will try to kill you in March. Your massive ego suffers a blow but you quickly recover and go on to perform an improvised comedy/musical/dance act at the Baxter Theatre. Well, outside the Baxter Theatre. In fact, on a pavement outside a tik den in Woodstock. You will be a hit. Or be hit. Or take a hit. The oracle is murky.

Virgo – Forget Gemini. Virgos are the most disliked of the star signs. You are compassionate and caring, but not so compassionate that you’d have sex with a man who is down on his knees begging for it. I’m talking about a friend, here. You will be more popular this year if you raise your skirt and lower your standards. If you’re a man, let your willy and not your brain do the thinking for a change. Many Virgos are found in the service industries. Remember that prostitution not only provides a valuable service, it’s also a fun way to earn a little extra money.

Libra – Affectionate and romantic, you depend too heavily on your partner and friends for support. The Scales are your symbol, which suggests you also depend too heavily on drugs. Ambitious yet lethargic, you need to get some balance in your life. Less weed and more speed, perhaps. Make the year more interesting by saying yes when you mean no, and vice versa. Be careful of the number seven and avoid men who wear hats.

Scorpio – Your element is water and your symbol is the scorpion. This is stupid. Scorpions hate water unless it has a dash of whiskey in it. For the sake of compromise, let us make your symbol a Jamesons on the rocks. Ruled by Mars, a rubbish planet overrun by toy cars from America, the ever-contrarian Scorpio knows all the answers and has a prodigious passion for power. All Israelis are Scorpios. You are entering an exciting new phase of love, prosperity and the total annihilation of Palestine.

Sagittarius – As the Archer, you owe it to yourself to invest in a real bow this year. Your metaphorical arrows have failed you dismally in the past, either falling short or hitting the wrong target altogether. It’s time for the real thing. And think big. Instead of stealing the office stationery, rob a bank. No, not with a bow and arrow, you idiot. Use a gun like everyone else. You will once again be unlucky in love this year. With the Centaur as your astrological symbol, this shouldn’t come as a surprise. On the other hand, I know a number of women who think nothing of sharing their bed with a creature who is half-human, half-beast.

Capricorn – Goat-people often need to be push-started. You know that the first step on any journey is the hardest, especially when you’re very stoned, and sometimes it takes a little light whipping to get you moving. Once you’re climbing the mountain of success, you don’t know when to stop and often have to be brought down with a dart gun for your own good. You will have a decision to make this year. Good luck with that.

Aquarius – The Water Bearer is not much in demand anywhere outside the Sahara, and even then your average Tuareg would rather you were bearing a six-pack of Brutal Fruit. One of them clean-living veggie Berbers would probably be happy enough with water, though. Considered to be “special” people, there are more Aquarians in mental asylums than any other sign. For those who weigh less than 53kgs, it is going to be a good year for love. Or anorexia. Watch out for a tall man with red eyes and no teeth.

Pisces – The Zodiac’s most sensitive sign, which makes no sense because fish are easily the most insensitive animals on the planet. Pisceans are relatively easy to hook and they make good eating, but can become confused and belligerent when out of their element for too long. Their natural environment is happy hour at a wet bar. July will see dreams turn into reality. In August, reality will become dreams. Come September, there will be doctors, lithium and straps on your bed.