By the time you read this, I will have crossed the finish line in the Cape Town Cycle Tour way ahead of Lance Armstrong and if anyone is looking for me, I’ll be in the Fireman’s Arms carbo-loading on Windhoek lager.
I intend crossing the finish line on foot and will probably catch a cab to the pub. I don’t, you see, own a bicycle. I believe that bicycles are for children and circus bears.
But even if I mentally regressed to the age of nine, or turned into a grizzly overnight, I still wouldn’t get one. Far less would I mount a sliver of a saddle and compete against 35 000 pointy-headed people wearing disturbingly tight Lycra and gay shoes over a distance of 109kms. I can’t even drive my car for 109kms without falling asleep or stopping for beer.
So my dirty little secret is out. I am not a cyclist. I’m glad that’s out of the way. I wouldn’t want racers getting halfway through this column and thinking: “It’s this kind of idiot that gives cycling a bad name.” Come to think of it, I am precisely that kind of idiot. And I can do it without going anywhere near a bike. In fact, I’m doing it right now from behind my computer with a jug of sangria at my elbow. If I open my window, I can shout: “Faster, you lazy bastard,” at every cyclist who comes heaving into view.
I have to make sure my gate is locked, though. Cyclists are renowned for their over-sensitivity to verbal abuse and many a motorist has been grateful for a gap in the traffic opening up as an outraged peloton bears down on him after he had the sheer bloody nerve to overtake while they were riding 17 abreast.
As all serious writers do when faced with a subject requiring in-depth research, I turned to Google. “Cycling” throws up 52 million results. This was astonishing, especially when one considers that “sex with your wife” throws up 21 million results. Okay, perhaps it’s not all that astonishing.
The first website I encountered was a tremendous help. It said: “Cycling is an activity most commonly performed on a bicycle.” This is like pointing out that walking is an activity most commonly performed on the legs.
“I know what cycling is!” I shouted, giving my computer a swift backhand. It was more cooperative after that, and it wasn’t long before it coughed up a fact that I could use.
Did you know that the modern bicycle was introduced in the 19th century and numbers about one billion worldwide? What I find even more alarming is that the Chinese were introduced in the Neolithic era and now number about 1.5 billion. This means that bicycles are multiplying faster than the Chinese. You don’t have to be a genius to conclude that the threat of world domination comes from bicycles and not, as previously thought, the Chinese. Bicycle-riding Chinese clearly pose the biggest danger of all to the planet.
The first bicycle was invented by a Frenchman, an Englishman, a Scotsman or an American – depending on who you ask. One of the earliest prototypes was called a velocipede. It was designed by a German and had a wooden frame, square wheels and no handlebars or pedals. It just sat there, looking rather stupid. Perhaps I’m thinking of the inventor.
The Penny Farthing was an improvement, if you can call anything designed by an escaped mental patient an improvement. Okay, I’m bored with that bit.
Let us rather look at the development of cyclists themselves. Early cyclists were covered in hair and had long, curved incisors which they would use to bite one another while bunched together at the start. In that respect, not much has changed.
The evolution of cyclists, from wild-eyed Neanderthals to red-eyed substance abusers, coincided with the evolution of performance-enhancing drugs. In the 1800s, the most popular drugs were morphine and cocaine. This meant that many entrants in earlier events, such as the Bordeaux-Paris race, carried on past the finish line and eventually had to be brought down by police snipers waiting at the Italian border.
Once the bodies began piling up, cyclists reluctantly agreed that powerful opiates and amphetamines were tarnishing the image of the sport. For a long time, cyclists were the only people in Europe not getting high on weekends. Some of the top athletes of today still talk about that era in hushed tones, which goes a long way towards helping people fall asleep.
These days, I am pleased to report, cyclists no longer feel guilty when it comes to stuffing their faces with any number of illicit narcotics. Alcohol remains a firm favourite, although the jury is still passed out regarding its performance enhancing qualities.
Marijuana, South Africa’s most popular cash crop, is regarded as more of a hindrance than a help when it comes to beating the cut-off time. Given the Cape’s spectacular scenery, some riders have been known to take up to three days to finish the race after accidentally sucking on a bong right before the start.
Forget about rubbish like dehydroepiandronsterone, methylhexanamine and recombinant erythropoietin. If you struggle to pronounce it, you can be sure it’s banned. Stick with something simple. Like LSD. It will diminish your resolve to finish the race and you will make lots of interesting new friends along the route, some of whom may actually exist.
Hopefully nobody will be asked to wee into a cup after today’s fiasco. This is not a police state like Australia and I urge officials to have the good grace to turn a blind eye or, at the very least, accept bribes.

I never intended to enter the Cape Argus Cycle Tour, but by Friday I was so sick and tired of these people taking over our restaurants and filling our brothels that I decided to teach them a lesson.

I approached Ted with the plan and he was up for it from the start. Right away he wanted to know what drugs we would be taking.

Studying the route was key to winning the race. After much poring over maps and pouring of beers, we found what we were looking for – a convenient cul-de-sac leading off Queens Road in Sea Point. All we had to do was find a couple of bicycles.

With so many in town it wasn’t that difficult. In fact, it took us less than an hour of driving around Bantry Bay with a bobbejaan spanner to acquire a couple of fine-looking bright red racing bikes.

This morning found me and Ted lying low in the cul-de-sac arguing about what drugs to take. Narco-loading is vital for racers such as ourselves. Essentially, we are sprinters. But jumping into the race two hours after the official start is not as easy as it sounds. The pack leaders swooping into Sea Point are usually in an ugly mood and timing is everything.

Even though our race would only be 3.5km long, we had to be fully prepared.

Ted had brought along two plastic bottles – one filled with white wine, the other with red. He said this was in case we changed our minds at the last minute and decided to jump into the race on the other side of the mountain, where people drink red wine. He was saving the cheap white for Green Point.

I had one of those cunning backpacks designed to hold a litre of pre-mixed Jose Cuervo and orange juice. A plastic tube ran from the bottle to my mouth.

Ted wanted to take two Dexedrines to get his heart rate up and a Seconal to bring it down. He said that with a fluctuating pulse and arrhythmic heartbeat he would be unstoppable. His symptoms sounded like a cardiac arrest and his strategy made no sense at all, but I had more important things to worry about.

I had a dope muffin the size of a soccer ball in my backpack but I knew if I wolfed that thing down, there was a good chance the frontrunners would suspect something as I raced past them laughing at nothing and talking to nobody.

The alternative was a bankie full of stale magic mushrooms that I bought years ago from a dishevelled shaman hanging around the entrance to Stonehenge trying to get a lift back to Putney.

In the end I opted for a mouthful of each and told Ted to get ready. He swallowed his Dexies and within a minute was pacing up and down the parking lot, babbling incessantly and gnawing the insides of his mouth to a bloody pulp. It wasn’t a pretty sight.

There is no doubt that drugs make any race a lot more exciting. For one, they help dissolve all those awkward social barriers that prevent you from openly taunting your opponents.

Steroids, needless to say, are the worst kind of drugs you can take. They do absolutely nothing for your mind and I, for one, applaud sports administrators for banning this scourge.

Unfortunately we had left it too late to buy Day-Glo orange lycra shirts so, the night before, Ted and I had produced a couple of hand-painted outfits that looked virtually identical to the real thing. All we needed to complete the ensemble were a couple of sponsors.

I chose Armscor and the Arthur Murray School of Dancing while Ted opted for the Gay and Lesbian Alliance and the SA Police.

I dredged up a pair of stretchy floral shorts from the back of Brenda’s underwear drawer (dear god, I hope they were shorts) while Ted had to make do with a baggy pair of semen-stained khaki Bermudas. I threatened to pull out unless he changed his broeks.

“What about you,” he said, snorting loudly. I asked him about the snorting but he quickly denied having been at the Colombian marching powder.

Before I left the house I caught a glimpse of myself in the mirror. Something was missing. At first I couldn’t work out what it was. I had everything the modern cyclist could possibly need – bright shirt, stupid shoes, funny helmet, drugs, alcohol, tight pants.

Tight pants! That’s what was missing. I rolled up a pair of socks and rammed them down the front. There. Much better. Now I looked like a real sportsman.

So it was with heads full of amphetamines, depressants, psilocybin, tedrahydrocannibanol and tequila that we found ourselves lurching out of the cul-de-sac as the first of the bunch came swarming past just after 8.15am.

We were half way to Green Point when Ted gave the signal to make our move. Much later he told me that this was, in fact, not the signal.

Narco-loading is great for short sprints but one of the side effects is that you see and hear things that might not necessarily exist. Like the blonde who lifted her top, causing Ted to crash into the straw bales.

The upshot is that I held back until we were opposite the Green Point tennis courts and then made my spurt. In retrospect, I spurted way too soon. It’s a recurring problem.

After holding the lead between the second and third set of traffic lights on Beach Road, the pack charged past me. I was even overtaken by a woman.

Later, while drinking beer to counter the effects of the post-race high, I told Ted how a muscle-bound lesbian had beaten me to the finish. He looked at me with a dazed expression and said, “It’s not about the dyke.”

Well, that’s all history now. The caravan has moved on, leaving behind more chafed crotches and sore bottoms than you might find in Sydney on the last night of Mardis Gras. 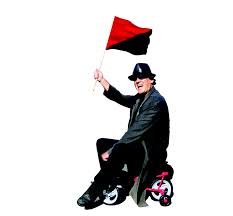