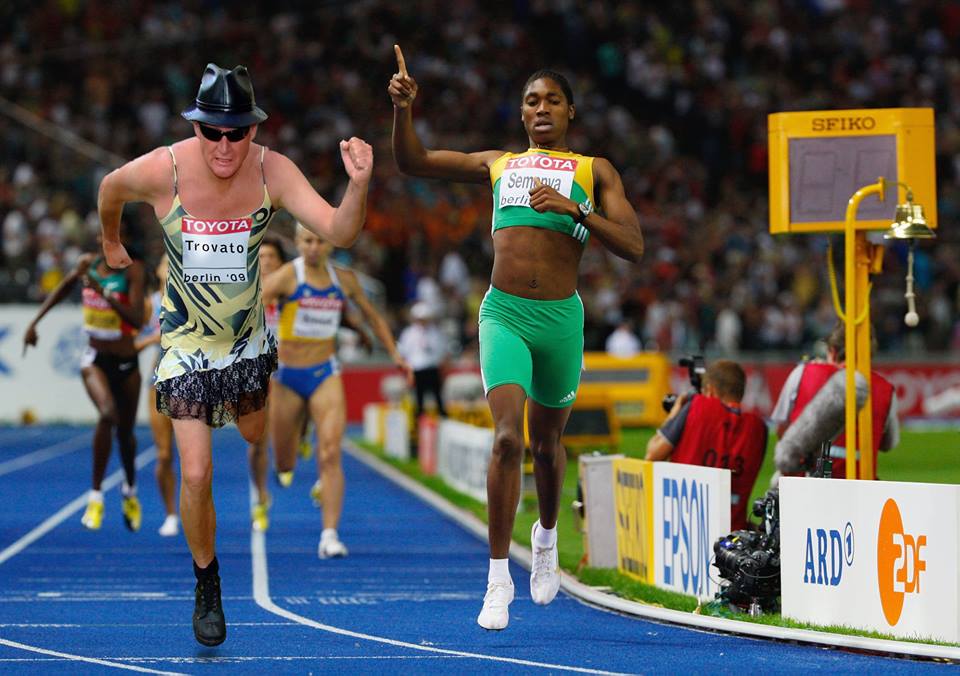 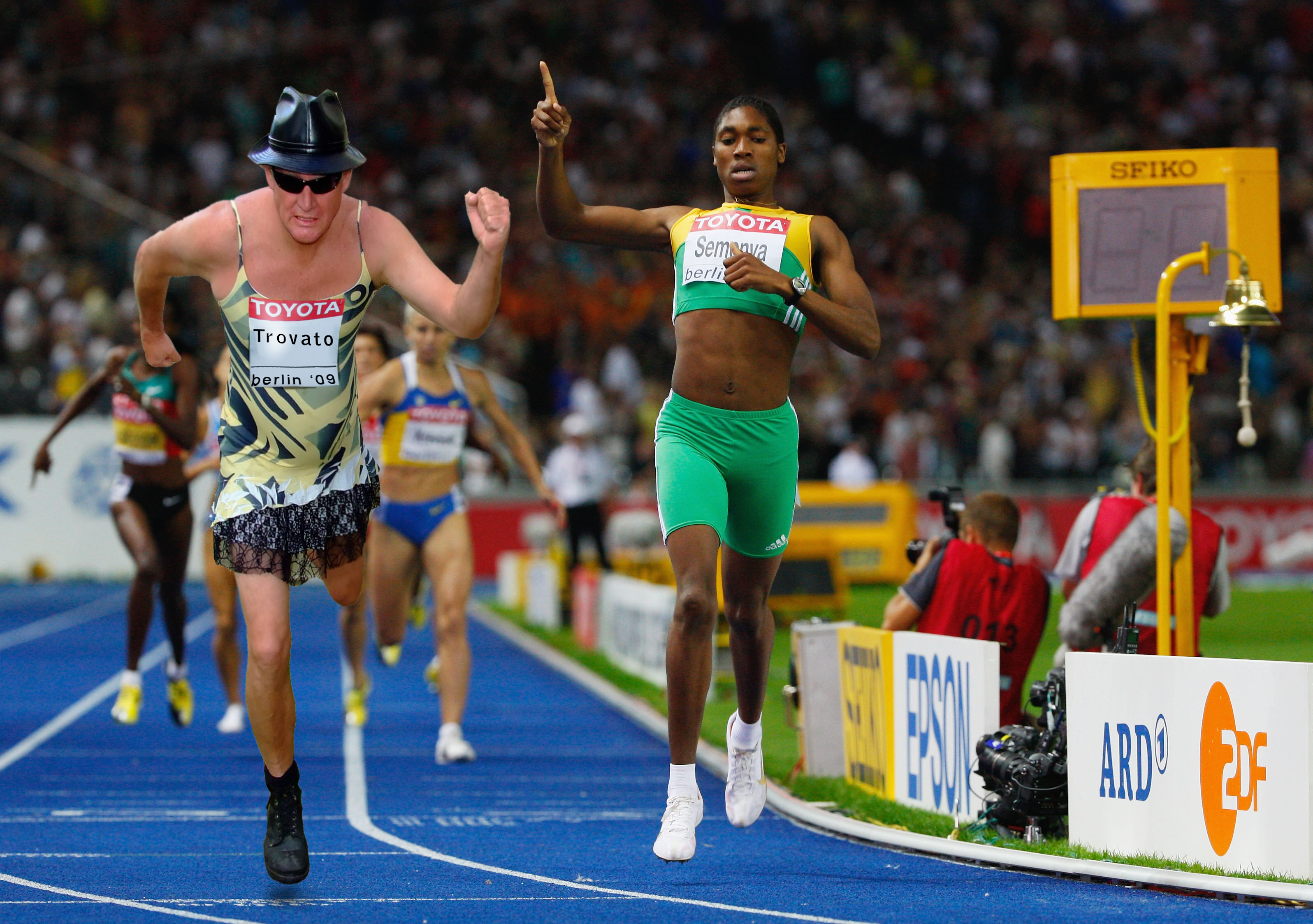 The last time Caster Semenya returned home victorious was after the Berlin world championships in 2009. This is what I wrote then. Let’s hope it goes a little better this time around.

While the state-funded broadcaster was showing a repeat of 7de Laan on Tuesday morning, e.tv was live at OR Tambo International Airport for the return of teenage mutant ninja athlete, Caster Semenya, and her muscle-bound mates.
The broadcast was live in much the same way that a snapped power cable thrashing about on the ground is live. The cameraman appeared to be having some sort of seizure and reporter Iman Rappetti could hardly be heard above the bleating of vuvuzelas and someone from the ANC Women’s League on a makeshift stage screaming hysterically. “Viva Caster Semenya viva!” she screeched. “Viva the rest of the team whose names I don’t know or even what events they participated in, viva!”
Given the uproar, a tourist might have mistaken our athletes for a team of negotiators back from securing a lasting peace in the Middle East. A reception of this magnitude surely couldn’t be for a bunch of youngsters who run, jump and throw stuff better than the rest of us.
Despite the team’s sweep of two gold medals in Berlin, the truth is that very few people would have been at the airport at all if the IAAF hadn’t implied that our star athlete was an androgynous alien simply because she doesn’t need a bra and can run the 800m in nine seconds flat.
Mercifully, e.tv lost their sound link for a few minutes. I knew what Tom Hanks must have felt like right after that shell exploded next to him in Saving Private Ryan. There were no dismembered corpses in this tableau, but Saving Caster Semenya was turning into a movie that, frighteningly, had no discernible genre. “Maybe it should go for genre testing,” I said to the cat. The cat made it clear that it couldn’t care less.
The ANC Youth League’s idiot savant, Julius Malema, was handed the microphone and the nation braced itself. “Down with racism, down!” he shouted. “Caster Semenya and Nelson Mandela make us proud!” he shouted. Of course they do. After all, Mandela spent 27 years in jail because he dared to take a stand against the inhuman policy of gender verification. Pity he couldn’t run like Caster otherwise he might never have been caught.
Then the idiot savant hit his stride. “Where are the white South Africans to welcome Caster? If it was rugby they would be here.” I may be wrong, but at 11am on a Tuesday there was an outside chance that most of them were at work. Or in Perth.
Before he was darted with a tranquiliser gun, Malema had a few words for the imperialist counter-revolutionary press. “The white-controlled media are wrong. She is female,” he babbled..
Then the Minister of Women took the stage. “Down with the IAAF, down!” shouted the human vuvuzela. “We will fight and walk together with Caster.” It’s a good thing she said “walk” because from where I sat, with my gut spilling over the top of my tracksuit pants, it didn’t look as if she could run if a lion were after her.
Then the circus moved off for a press conference. I opened another beer and, exhausted by the effort, slumped back onto the couch. Caster was flanked by a curious mixture of politicians, sports administrators, athletes and at least one convicted criminal.
The only person who failed to urge the masses to rise up against the injustices perpetrated against Caster – choosing instead to point out that sport had the capacity to unite people – was SASCOC president Gideon Sam. He ought to be ashamed of himself.
With the anaesthetic wearing off, and becoming more idiot and less savant by the second, Malema lunged for the microphone and said, “One of the people who complained to IAAF is a media institution operating in South Africa.” He demanded to know “where is patriotism”.
“Here I am,” said a Zimbabwean journalist at the back. Malema’s bodyguard moved quickly to escort Patriotism from the press conference.
The ANC Women’s League representative thanked Caster’s parents for “giving us this very pretty girl”. Caster demurely lowered her eyes, flexed her deltoids and growled softly. Then the rep said she wasn’t going to say much more “because mama is here”. Mama turned out to be Winnie Madikizela-Mandela, who apparently prefers to do all the talking herself.
“I am here representing my country,” said Winnie, for the benefit of everyone wondering what she was doing at a press conference for athletes. “I align myself with everything Malema has said. The only whites here are journalists.” White viewers went to put the kettle on and check that their passports were valid.
Then Gideon Sam placed a garland of flowers around Caster’s neck. His leaning in for a kiss must rate as the second most awkward moment in sporting history, the first being at the 1972 Munich Olympics when the Israeli team opened their door expecting a pizza delivery man and instead got Black September.
Athletics SA boss Leonard Chuene, a charming man with the emotional intelligence of a five year old, foamed and frothed like a salted snail. I couldn’t understand a word. To his credit, though, he did admit that English was his fourth language, the first three being Pedi.
Then they were off to visit the president. I opened another beer and told the cat it was a bit odd that not one journalist had asked Caster a direct question. Perhaps they had been warned. The cat nodded. Then again, the cat does a lot of nodding.