When temperatures drop to 13 degrees in Durban, you know it’s time to make like a swallow and duck.

But when snow starts falling up the road, my hypothalamus, an easily startled creature at the best of times, shrivels to the size of a peanut and my autonomic nervous system goes to hell in a hand basket. That’s when I know the moment has come to shake off the metabolic depression and emerge from beneath my waffle-stack of monkey fur duvets, get into my Arctic fox jocks, thermal vest and Gore-Tex onesie, and head for the travel agent.

Airport trolleys aren’t designed for surfboards and airports aren’t designed for surfers. The board either keeps falling off or blocking your view and the layout of OR Tambo is such that if you arrive from Durban and are travelling on to, say, Bali, you might want to bring a pup tent and camp between domestic arrivals and international departures because the distances are vast and the signs more convoluted than our government’s foreign policy.

I remember, from a fairly young age, promising successive girlfriends and wives that one day we would live in a treehouse in Bali. I must have seen something in a surfing magazine. By the time I eventually got it together to go to Bali, a week ago, I found myself between girlfriends and wives.

Solo travel isn’t my first choice. Not because I get lonely, but because it’s so much easier to have someone else looking after the passports, filing in the forms, getting me out of the bar and to the gate before the plane leaves.

Long-haul flights are great if you’re Patrice Motsepe or Nicky Oppenheimer. But if you’re me or you, flying ten hours from Joburg to Hong Kong with your knees around your ears, being charged R80 for a beer and threatened with death if you smoke anything at all while in transit, then flying another five hours to Denpasar in Bali, isn’t all that great.

At 3pm the androids of Cathay Pacific marched down the aisles pulling down the shutters on the windows. In under a minute, the plane was plunged into darkness. People fell asleep immediately. It was like putting a blanket over a parrot cage. Not being a member of the parrot family, I insisted on maintaining my regular schedule of afternoon drinks, sundowners and several nightcaps. The droids seemed happy to comply. Well, maybe not happy. But the alternative wasn’t something they wanted to deal with.

Before I flew out, CNN was showing pictures of chaos at Denpasar Airport. It looked like the fall of Saigon. Thousands of Australians stranded because their girly pilots from Perth were too scared to fly through a bit of volcanic ash. The backlog had been cleared by the time I landed. Maybe it hadn’t. I got the feeling Denpasar airport is jammed year round with Aussies desperate to get in or get out.

Waiting to pick me up were a couple of expats who’d been in Bali long enough for them to think they could get away with wearing the kind of straw hats that nobody but ancient rice-pickers would dare be seen in. They strapped my board to the roof of their tarnished gold car and handed me a Bintang beer so big I had to hold it with two hands. I guzzled it greedily and begged for more.

Bali at this time of year offers my kind of heat. There’s very little difference between sea and air temperature and it doesn’t vary much between day and night. This means you can sleep in the ocean if you have trouble getting back to your room. Anchor yourself to a rock unless you want to drift off into the chokka fleet in the Badung Strait and end up on a French tourist’s dinner plate. Worse things can happen.

Let me say right upfront that Balinese people are lovely. They are genuinely friendly and show no signs of wanting to mug or murder their tourists. At first I thought they were practising an ancient form of Asian satire, but they weren’t. Having said that, if Dante’s vision of hell had not stopped at nine circles, the tenth circle would have been traffic on Bali. I suppose it’s no different to Bangkok, Hanoi or Phnom Penh, but I wasn’t expecting quite this level of mayhem. This is, after all, known as the Island of the Gods. What manner of merciless gods would allow huge trucks from Java to barrel down the same narrow road as a family of five on a spluttering underpowered Yahama? Then again, it is men who create gods, so I suppose anything is possible.

There are shrines everywhere. Outside every business, every home. Fresh flowers are laid, incense lit, prayers said. Several times a day. It seems to be working. I have yet to see a dead body – animal or human. Or even a fender bender, which doesn’t seem possible given that everybody rides and drives as fast as they can and nobody ever seems to give way. There is almost no hooting and no road rage. None at all. Perhaps they bottle it up and go off into the rice paddies and explode, but they don’t show it on the roads.

The driver of the gold vehicle momentarily lost concentration while opening a Bintang with some kind of ring on his finger and we found ourselves down a side street.

“Warung!” he shouted, slamming on brakes. I flung my door open and rolled like a parabat, coming to rest against a Bali dog who opened one eye and went back to sleep, as if this kind of thing happened all the time.

Warung, it turned out, wasn’t a warning of imminent danger. It means “local restaurant offering dishes that are mostly unavailable”.

Between the gado-gado and the bebek, I didn’t know what to order. Then I noticed a temple across the street. A swastika was carved into the stone entrance. Problem solved. “I’ll have the nazi goreng, please.” 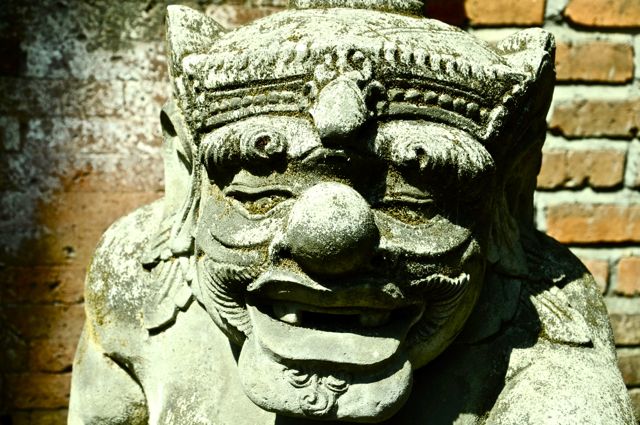