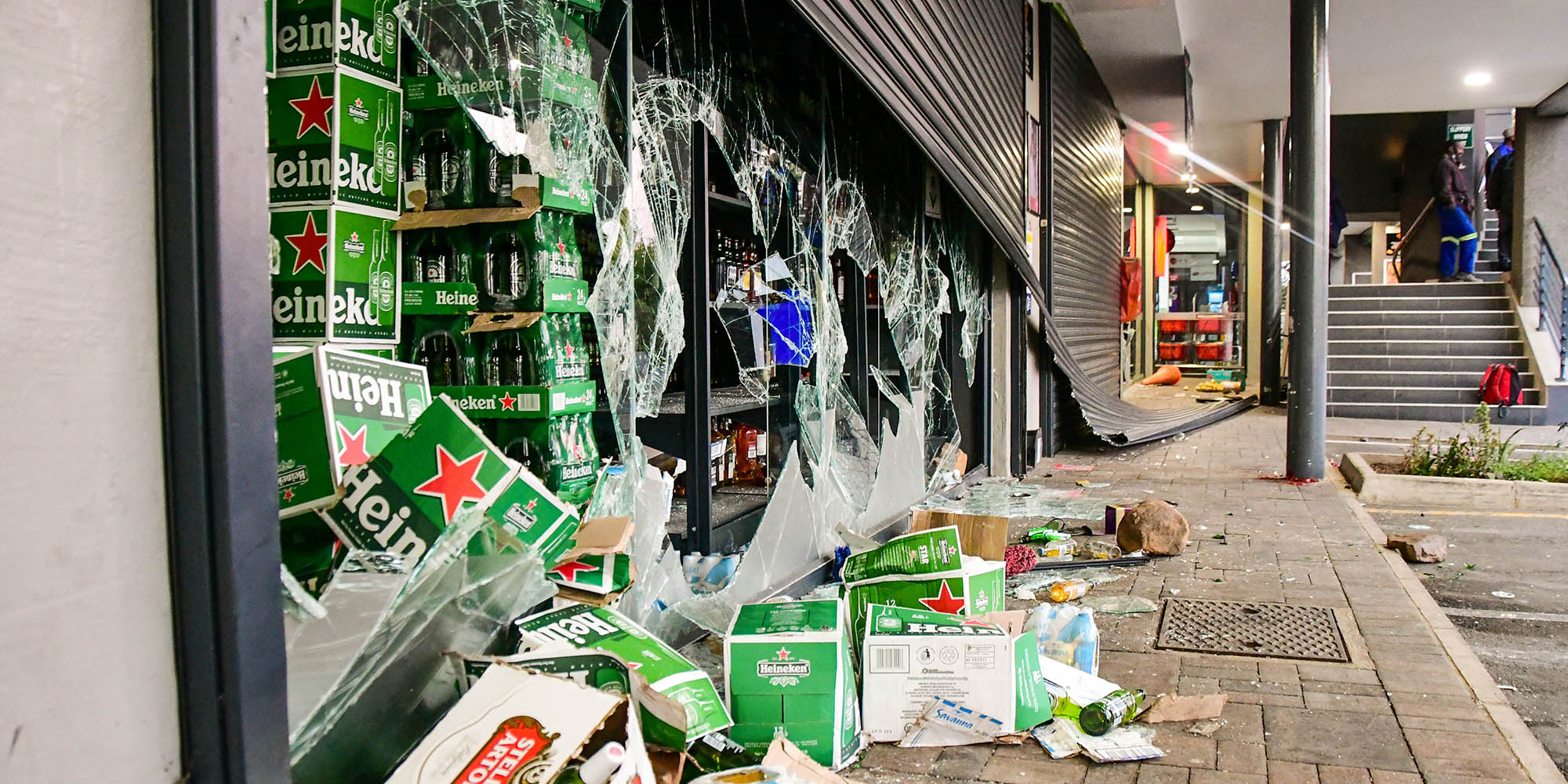 Halfway decent insurrectionists generally target government facilities and take over the state broadcaster. Ours targeted Shoprite and took over the bottle stores. Also, coup plotters usually rely on the support of the broader populace. “Help us get into power,” is the rebel cry. Here, the streets rang to the sound of, “Help us get into Tekkie Town.”

If your coup stands a chance of success, it’s also important to make sure that everyone got the memo. One looter who was interviewed said, “We are here to protest the unjust incarceration of our brave leader, Jacob Zuma.” Another intervened, “What? I thought we were protesting the unjust system that condemns us to live in poverty.”

In an inspiring display of whataboutism, state security minister Ayanda Dlodlo castigated the media for only focusing on the shops and malls that were targeted. “What about all the stuff that’s still standing?” she demanded, claiming that the intelligence services had prevented the really important infrastructure, like airports, power stations and the SA Breweries, from being destroyed. She’s a teller of industrial-strength porkies, that one.

But what if the sloppy seditionists had, in fact, succeeded in toppling the government? Ramaphosa is under house arrest and his Thuma Mina loyalists have been rounded up and are being held at undisclosed locations. Courts are shut down and the generals, not wanting to lose their jobs, pledge their support to the insurgents. What now?

Lockdown, being a Western construct, is ended immediately. The state of disaster is replaced by a state of freedom. No more restrictions on anything.

With the ANC firmly in the hands of the radical economic transformistas, an NEC meeting is called. Sheep are slaughtered, fires are lit, champagne corks are popped. Friends, relatives and comrades are invited to join in. The venue is changed to the FNB Stadium to accommodate 50 000 new members. With no agenda and drunken arguments about who is in charge, the meeting drags on.

It finally emerges that the ANC Top 6 is now the Top 12. Coincidentally, it’s the same 12 people named by the former regime as having instigated the insurrection. Somebody remembers that Jacob Zuma is still inside Estcourt prison and a car is sent to pick him up.

Zuma’s friends and family are invited to a lavish soiree at Nkandla where they are given goodie bags and positions in the new administration. The party continues for two weeks, during which the country is without a government. Nobody notices.

Carl Niehaus appears on Newzroom Afrika, the only broadcaster still permitted to operate, and informs the nation that SA will henceforth be a parliamentary kleptocracy instead of a constitutional democracy. He also announces the new cabinet.

Jacob Zuma is declared President for Life. This is an honorary position. He has no real power or duties but is entitled to a salary of his choosing. He chooses a fat one.

His Excellency Elias Sekgobelo Magashule is declared Supreme Leader, Lord of All the Beasts of the Earth and Fishes of the Seas, Conqueror of White Monopoly Capital in General and Cyril Ramaphosa in Particular.

Duduzane Zuma – Governor of the Reverse Bank. First order of business is to oversee the nonstop printing of money. New R5 000 notes feature his father’s face.

Carl Niehaus – Minister of Sport and Recreation. Moves to lobby the Olympic Committee to accept the toyi-toyi as a competitive sport. Arranges the recreation of historical events such as the Battle of Mooi River Plaza and the Skirmish at Maponya Mall.

Bathabile Dlamini – Minister of Bottle Stores. With Edward Zuma as her deputy, she is responsible for nationalising all liquor outlets and ensuring they remain open around the clock.

David Mabuza – Minister of Health and Overseas Travel. Responsible for arranging flights to Russia for members of the new administration who may or may not be unwell.

Des van Rooyen – Finance Minister. A part-time position (weekends only). Complies with demands for money by members of the executive. Reports to Duduzane Zuma.

Ayanda Dlodlo – CEO of the Human Riots Commission, responsible for instigating unrest in order to give the security forces a pretext to arrest DA supporters and other dissidents.

Zandile Gumede – Minister of Municipal Malfeasance. Tasked with rewarding councils for coming up with new and creative ways to fleece taxpayers. Also responsible for ensuring that municipalities conform to the lowest possible standards to avoid elitist tendencies.

Atul Gupta – Chairman of the board. All of them.

Duduzile Zuma-Sambudla – Minister of Tweets and Retweets. A home-based position, supportive of those who do the dirty work.