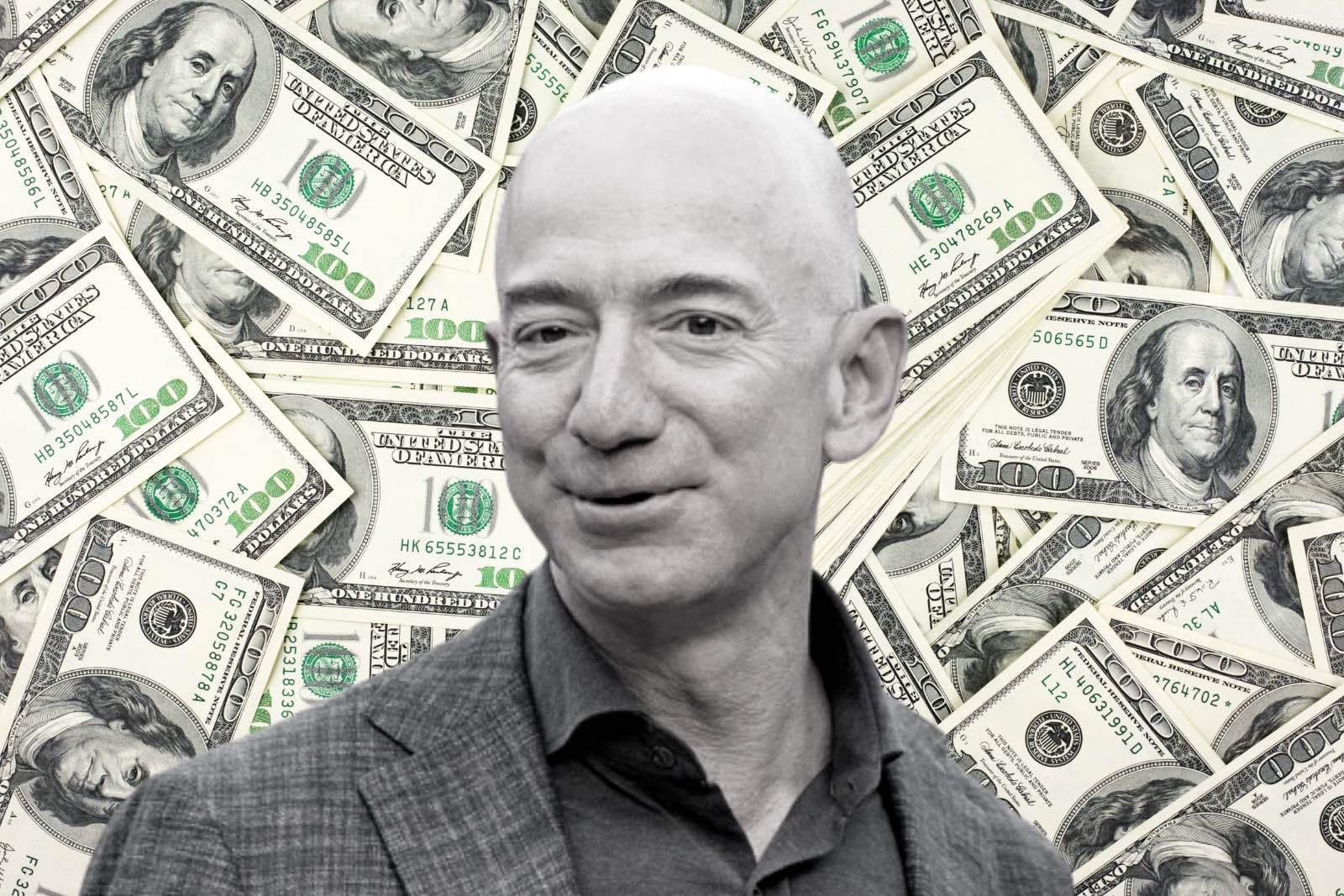 That sounds awfully stiff and formal. Do you mind if I call you Jeffrey? Or Jeff? I’m sure you don’t. You are nothing if not a man of the people. Besides, we have so much in common that it’s almost as if we are related. Perhaps not twins, but certainly cousins. For a start, you’re the richest man in the world and I am the richest man in my house. Yes, I do live alone. That’s not the point.

So, Jeffles. Congratulations are in order. Fourth year running, eh? Not easy when you have the likes of Elon Musk and Bill Gates hot on your heels. I was going to mention Bernard Arnault but there’s no point because the man is basically a champagne bootlegger who dabbles in fashion. Also, he’s French and nobody’s ever heard of him. Our richest man, Nicky Oppenheimer, is worth a paltry $8-billion. How embarrassing.

I was pleased to see that weirdo Zuckerberg could only manage fifth on the leaderboard this year. What a loser. I can’t see him catching your $177-billion any time soon. That’s a lot of money for a guy who basically runs a courier company. Kudos to you, my friend.

I don’t know whether to offer congratulations or condolences on your divorce. It’s a good thing that you are out of an unhappy marriage. But it’s a bad thing that it cost you $38-billion. Neither of my ex-wives got anything and I still felt robbed. So you interviewed MacKenzie for a job at the firm you were working at in the early 90s and married her a year later? What were you thinking? Don’t ever shag the staff. No good can come of it. I did the same thing with a woman who looks uncannily like MacKenzie. Unlike you, though, I had the good sense not to marry her. Come to think of it, MacKenzie was entitled to half your assets. You got off lightly. And it turns out I did mine a favour by not marrying her. Think maybe we’re the problem, Jeff?

Anyway, I’m not interested in your private life. I am, however, interested in your money. I do apologise. That sounded crass. We South Africans are known for our inability to tell the difference between right and wrong. I bet you’ve already picked that up from your fellow union-basher Elon Musk, right? Are you mates? Probably not. I can’t see you lurching around a braai with a doobie in one hand and a rum and coke in the other, which is how I imagine Elon spends his time when he’s not abusing workers in that sweatshop he calls a factory.

I didn’t know you had Viking blood in you! Your Danish father, Ted Jorgenson, was what we might call an early adopter. He was 18 and your mum only 17 when you were conceived. He was also what we might call a useless father and husband and your mother kicked his ass to the kerb after a couple of years, going on to marry a Cuban immigrant by the name of Miguel. Mike, to his new American friends. Just imagine, if your mother hadn’t bailed, you would have inherited your father’s business. Yep, you’d be the owner of a bicycle shop at a mall in Glendale, Arizona, today. Any regrets?

Never mind that now. I’ve been reading some wild stuff about what’s going down at the courier company. Why are you allowing employees to vote on whether or not they want to be unionised? Have you lost your mind? Once they have union protection, they will begin making outrageous demands for days off, sick leave and even lunch breaks.

Hold on. These workers at your warehouse in Bessemer, Alabama, voted against unionisation? Did you drug the water supply? Filthy communist union organisers accused you of intimidating the workforce. What nonsense. That camera positioned above the ballot box was there for security reasons, nothing more.

I read that you got $24-billion richer during the pandemic. Is that all? I would have expected more from the Jeffster. I guess you had to tone it down. Nobody wants to capitalise on a global crisis. Well, they do, but it’s a bad look. Negative optics, as they say.

On the other hand, July 20 last year was a good day. In the time it took you to wake up, have your bowl of saffron-infused white truffles drizzled with albino caviar and a cup of kopi luwak coffee excreted by the rarest of Asian civets, make a few phone calls, play a bit of Mortal Kombat and update your Tinder profile, you made $13-billion. I didn’t even make my bed.

I see you recently introduced a $15-an-hour minimum wage. That’s, like, R220 in our “money”. Are you sure you’ve thought this through? Don’t spoil your people, Jeff. You give them a taste for imported bananas and the next thing you know, they’re demanding Bentleys and second homes in the Hamptons.

Fun fact. Do you know that one of your employees on minimum wage would need to work 24 hours a day for 68 years just to earn what you make in one hour? Of course you do. Knowing this kind of stuff is why you sleep so well at night.

Anyway, if you ever need a hand, give me a shout. You’ll find my rates reasonable and my principles flexible.

Dear Bill,
Please accept my heartfelt condolences. The news must have come as a terrible shock and my prayers are with you and your family during this difficult time. Nobody deserves to wake up in the morning and discover that their world is crashing down around them before they have even had a chance to dip in to a simple breakfast of grilled coelacanth drizzled with ambrosia and lightly coated with flakes of gold.
When I saw the headline, “Gates No Longer World’s Richest Man” I wept at the injustice of it all. How are the children bearing up? It can’t be easy for them. On Monday Phoebe, Jenny and Rory are the most popular kids in school and by Friday, bam, they’re wearing oil-stained rags and mugging pre-schoolers for their lunch money.
You once said that when you die you don’t want to leave your children the burden of tremendous wealth and that’s why you would only bequeath them $10-million each. Please let them know that if they ever run short, and they will, they can call on me any time. What’s mine will always be theirs. And I hope there is no reason to think the reverse doesn’t apply.
Melinda must be taking it hardest of all, what with people coming up to her in the street and saying cruel things like, “Aren’t you married to that loser who is no longer the richest man in the world?”
A word of advice, Bill. Keep her close. Even though money might be tight, buy her shiny baubles and fresh flowers now and again, even if they are from the garage. She is nine years younger than you and I expect her eye will begin wandering now that you are on the skids. The last thing you need is packs of salivating divorce lawyers on your tail.
But let’s get back to what is really important here – the imposter who has usurped your richly-deserved title. Who the hell does this Jeff Bezos interloper think he is? And what the hell kind of name is Bezos, anyway? Did you know that he was born in Mexico? Well, New Mexico. It’s no different to the old Mexico. It just happens to be in America. But only just. So he runs Amazon. Big deal. He’s nothing more than a glorified mailman.
Bezos is worth nearly $94-billion while you’re making hardly any money at all these days because everything is pirated. Millions of computers get sold each year in China alone and you don’t see a blue cent. A few years ago, you spoke at the University of Washington and said, “As long as they are going to steal (software), we want them to steal ours. They’ll get sort of addicted and then we’ll somehow figure out how to collect sometime in the next decade.”
Methamphetamine dealers use a similar strategy when targeting primary schools in the Western Cape. If it works for them, it should work for you.
I hear that you have deleted your Facebook account because nobody wants to be your friend any more. Screw them, Bill. If they don’t want to know you because you’re down to your last $89-billion, they were never real friends in the first place.
I bet now you’re regretting having retired so young. Do you have a pension? I understand you spend a lot of your free time helping alleviate global poverty. This is admirable when you consider that three billion people around the world live on less than $2 per day. Given that Windows 10 Pro costs $199 (more on the Djibouti black market), it’s no wonder that CNN is always full of pictures of starving people in Africa. They are obviously saving up their food money to buy the new software. You are on the right track, Bill. Forget the Chinese. Get the Africans addicted and you’ll be back on top in no time at all.
I understand that your Foundation has a specific interest in improving the health of people in developing countries. This makes perfect sense. Imagine what a tragedy it would be if everyone kept dying before they could buy the latest upgrade!
You could begin by throwing some cash our way. A lot of South Africans are suffering from high blood pressure, splitting headaches, damaged eyesight, strained wrists and crippling backache. Well, those of us with computers, anyway.
Hope to see you back in pole position soon!
Yours truly,
Ben Trovato