The warnings started appearing on Facebook on Tuesday. It might have been Monday. When you do what I do for a living, the only difference between days is the spelling.

One woman posted on her wall, “Stay clear of Point Road today! Xenophobic attacks and looting going on.” Who was she advising? She didn’t look like the type of person with friends who frequented Point Road on a regular basis.

The last time I went to Point Road I got arrested for swearing at a policeman. It’s not safe down there any more. It was fine when it was a pestilential bog of whores and drug dealers, but those glory days are over. Now it’s called Mahatma Gandhi Street and the hookers and junkies must share their turf with protestors and looters. Fair enough. It’s the democratic way.

Facebook, being home to many of our finest political commentators, was awash with intelligent reaction. “WTF?” seemed popular. I don’t even know why eNCA bothers speaking to experts like Angelo Fick for in-depth analysis. He could just sit there shaking his head and saying “WTF?” after every story. Everyone else does.

Someone responded to the posting with a helpful, “Get out of there!” These words were shouted at me once when I was younger and easily startled and it took a week to lure me out of the vegetation with a trail of tiny bottles of airline vodka.

If you’re white and your friends and relatives are advising you to get out, you can be sure they don’t mean your house or even your suburb. They’re talking about your country. How is that even an option for most people? Shouldn’t they be saying, “If you qualify for Australia’s impenetrable points system and have a huge amount of money in the bank and no pets, children, elderly parents or employees who rely on you, get out of there!”

A lot of white people are getting jumpy. First the statues, now the foreigners. Sooner or later, the vandals and Visigoths are going to want to start on real symbols of oppression that actually scream when they are toppled. It’s so much more interactive.

On Tuesday, Police Minister Nathi Nhleko sauntered into the fray. Anyone hoping for Charles Bronson in Death Wish would have been disappointed. He was speaking to journalists in parliament, along with his colleagues from something called the justice, crime prevention and security cluster. Great. There’s nothing like a cluster to get a murderous mob to put down their pangas and listen carefully to what’s being said. Especially if the cluster is made up of well-fed men in expensive suits.

Comrade, please. We’re trying to lie low, here. The cerebrally challenged herd of bloodmongers won’t differentiate between white South Africans, Aussies, Poms or even Lithuanians for that matter. So don’t go putting ideas into their heads. It’s far safer that they have no ideas at all.

Nhleko said the problem was ideological in nature. He’s right, of course, and I cannot understand why the government has not yet formed a Special Ideological Squad that can subdue the rampaging scofflaws by offering them a cappuccino and two free lectures on The Importance of African Unity.

“What we are witnessing,” warbled Nhleko, “are Afrophobic activities and attacks … resembling all elements of self-hate … among Africans and so forth.” Thabo Mbeki said things like, “And so forth.” It’s a career-killer, Nathi. Drop it.

So. Afrophobia. I like it. If we are going to have phobias, let’s at least have ones that even the dull-witted underclass stand a chance of grasping. Nobody should feel left out. That’s what mob rule is all about. Inclusivity. Viva. Pass the petrol bomb on the left hand side. It a gonna burn.

The minister has clearly been to university. At a guess I’d say he studied psychology at some point. People don’t use phrases like “resembling all elements of self-hate” unless they’re really stoned or really educated. Sometimes both.

If the homicidal hoi polloi are suffering from self-hatred, they should try self-harming. I believe it works wonders as an outlet for anger and low self-esteem.

Of course, none of this might have anything to do with xenophobia, Afrophobia, arachnophobia or any other kind of phobia. They might just be doing it out of sheer boredom. If I had to spend all day standing on a street corner waiting for nothing to happen, I might not turn down the opportunity to taunt the cops and burn a tyre or two. Killing, maiming and pillaging aside, protesting looks like it could be a lot of fun. Sadly, I don’t feel I have earned the right to brandish a machete or fling poo. Most days I am so full of white guilt and male shame that I can barely poo at all.

“You journalists are causing chaos,” quoth the royal rabble-rouser. That’s right. It’s because of the media that overseas travel agents are quietly covering up their posters of Durban with posters of, I don’t know, pretty much any place that doesn’t offer ethnic cleansing as one of its attractions.

All I can suggest is that the ironically named Goodwill abdicates immediately. I am prepared to take over until a more suitable monarch can be found. I will have no wives, demand nothing but free beer from the taxpayer and instead of the annual Reed Dance I’ll have a monthly Weed Dance. 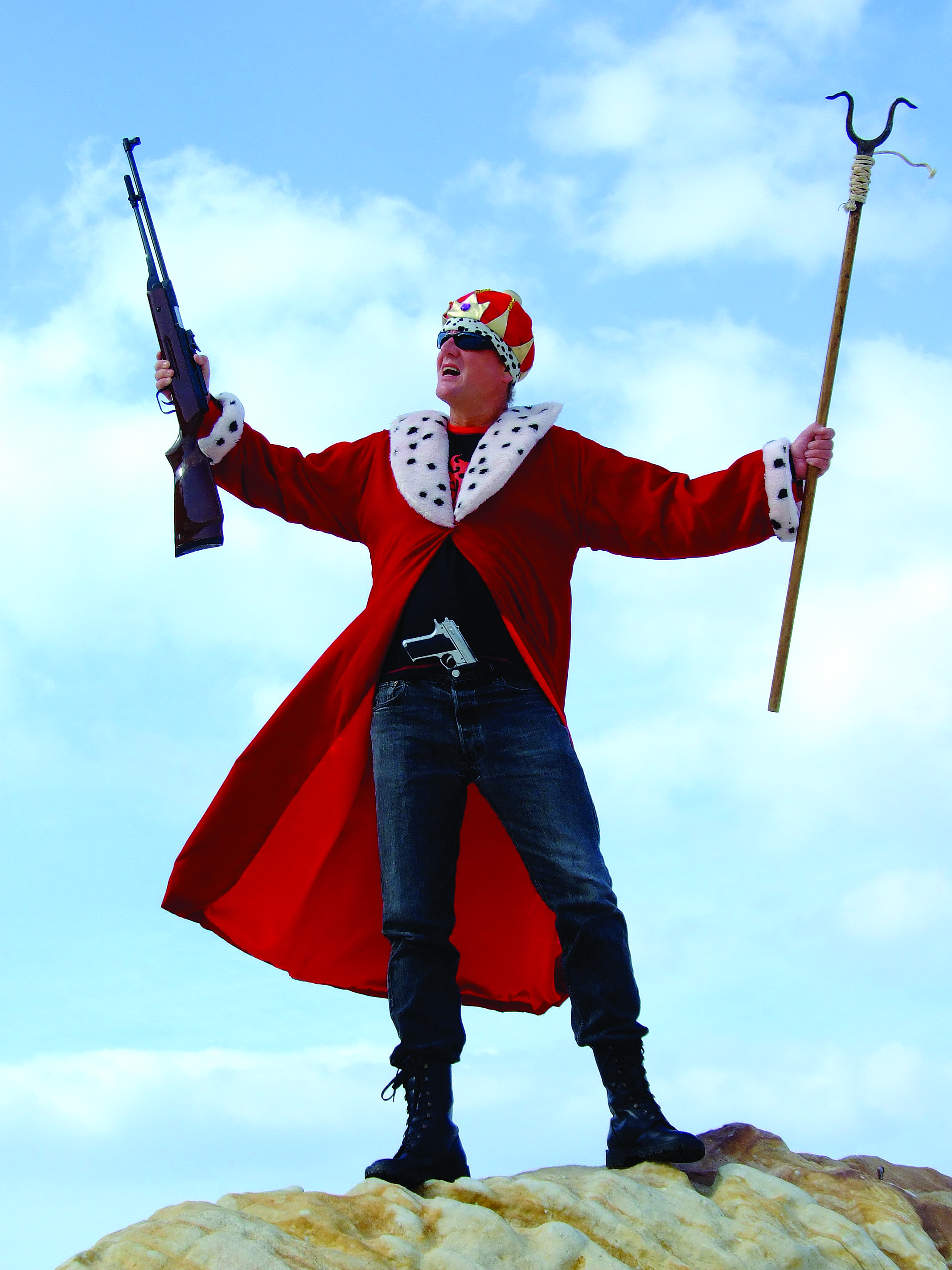