Don’t get me wrong. You won’t catch me hugging any bunnies, but that’s largely because I’m afraid of them. It’s not funny. Leporiphobia is a real thing. I don’t come around to your house and laugh at your phobias, but I will if I have to. Actually, no, I won’t. I will come to your house with spiders and snakes and black men wearing balaclavas and force you to confront your fears. I might also laugh.

Then there are the tens of thousands of people around the world walking the streets today who have shot and killed people. Some of them even got medals for it. They are soldiers, former soldiers and that guy at the end of the bar who you really don’t want to bump into. Are they all arseholes? Of course not. But mostly, yes.

I like the idea of guns more than I like guns themselves. They’re a bit like women, really. And I don’t mean loud and capable of going off for no good reason at all. I mean you feel invincible when you have one, but take it away and you spend your nights in the foetal position crying yourself to sleep.

Guns are weirdly supernatural. I don’t understand how they work. I also find television and electricity weirdly supernatural. Did you know that Superman is the only person who can travel faster than a speeding bullet? It’s no wonder we haven’t seen him in ages. He probably overshot Hillbrow in the 1960s and has been trying to find his way back from the Andromeda galaxy ever since.

The idea of being able to kill someone sitting on the beach a kilometer away is one that I find strangely compelling. You needn’t even have to stand up. Simply put your beer down, rest your rifle on a small child’s head, aim and pull the trigger. Bam! One less person on the beach.

History has shown that hostile forces tend to gather at the seaside. The Germans killed thousands on the beaches of Normandy. Of course, you’re going to need more than a sniper rifle if you hope to match figures like these. And you’re going to have to wait until December.

Google spits up 381 million results if you search for “guns”. I googled “sex” and got 1.6 billon results. Then I got distracted. Later, I googled sex and guns and got 96 million results, one of which was a story out of an American town called Blacksburg. “A small community in Virginia mourns as a man dies after having sex with his revolver.” It got worse after that. The next few results pointed me to sites about Guns N’ Roses, a band that toured Europe in the late 1940s, precipitating the early surrender of the Nazis.

I prefer knives to guns. When you’re not stabbing someone, you can use it to put Marmite on your toast. Try doing that with a gun.

Perhaps I need to learn how to love guns. Embrace them. Not in the way the guy from Blacksburg embraced his, obviously. Besides, I’d have a hard time inserting my … never mind.

I’m not a complete stranger to guns. When I was a kid my father would take me and his Walther PPK pistol down to the mangroves near Blue Lagoon. The first time it happened I thought he was going to kill me. Especially when he sat down and polished off half a dozen beers. Instead, he lined up the empties in a row. Then he put the gun in my little hand and told me to pretend the tins were communists. If this was a rite of passage, I failed miserably. “Go a bit closer,” he said every time I missed. Eventually I had the barrel pressed up against one of the cans. It was like an execution.

Their website says, “Let us help you find the firearm that fits you best.” Fair enough. Who among us hasn’t seen a toddler struggling to load her AK-47 and thought, “If only she had gone to a shop that cared.”

They have seven categories of guns including competition, concealed carry, home defence and short to long range. We don’t mess about with categories in South Africa. We just go a township and ask around. Or take one off a sleeping policeman.

I was immediately drawn to the concealed carry category because I have always liked hiding things. This probably explains my two failed marriages.

The multi-purpose category has 25 handguns to choose from. “Perhaps you want something to put on the nightstand after spending the day with it on the range. Or maybe you want something that you’ll shoot as often as you carry it.” I don’t understand what any of this means. I want to be able to pull the trigger and have a piece of lead ejected at 1000m a second. That’s all that matters. Forget all this talk of nightstands. You don’t want your gun reminding you of bed – you want to be reminded that it makes living things dead.

Home defence, or defense as they say, because Americans can’t spell, has 26 options. “The good news is that Springfield Armory produces several ergonomically pleasing and feature-rich firearms with plenty of capacity and power.”

This is good news for victims. Imagine the indignity of dying in a pool of your own blood after being shot with a firearm that was less than ergonomically pleasing. What a horrible way to go.

I’m disappointed that the shape of guns has barely changed since they were invented. Look at the range of bubble guns in toyshops. I saw one the other day shaped like a seahorse. Why can’t we do the same with real guns? I, for one, would be far more inclined to arm myself if I could buy a pistol shaped like a mongoose or a dolphin.

Come on, gun people. Let’s put the fun back into fundamentalism.

Lastly, I agree with those who say that mental illness is to blame for all the mass shootings in America. The National Rifle Association alone has five million mentally ill members. In 2013, a proposal on gun control was torpedoed when 45 mentally ill senators voted against background checks and a ban on assault rifles. Half of America’s adult population opposes stricter gun control laws. That’s 120 million mentally ill people right there. With that many crazy people on the loose, no wonder everyone wants a gun. 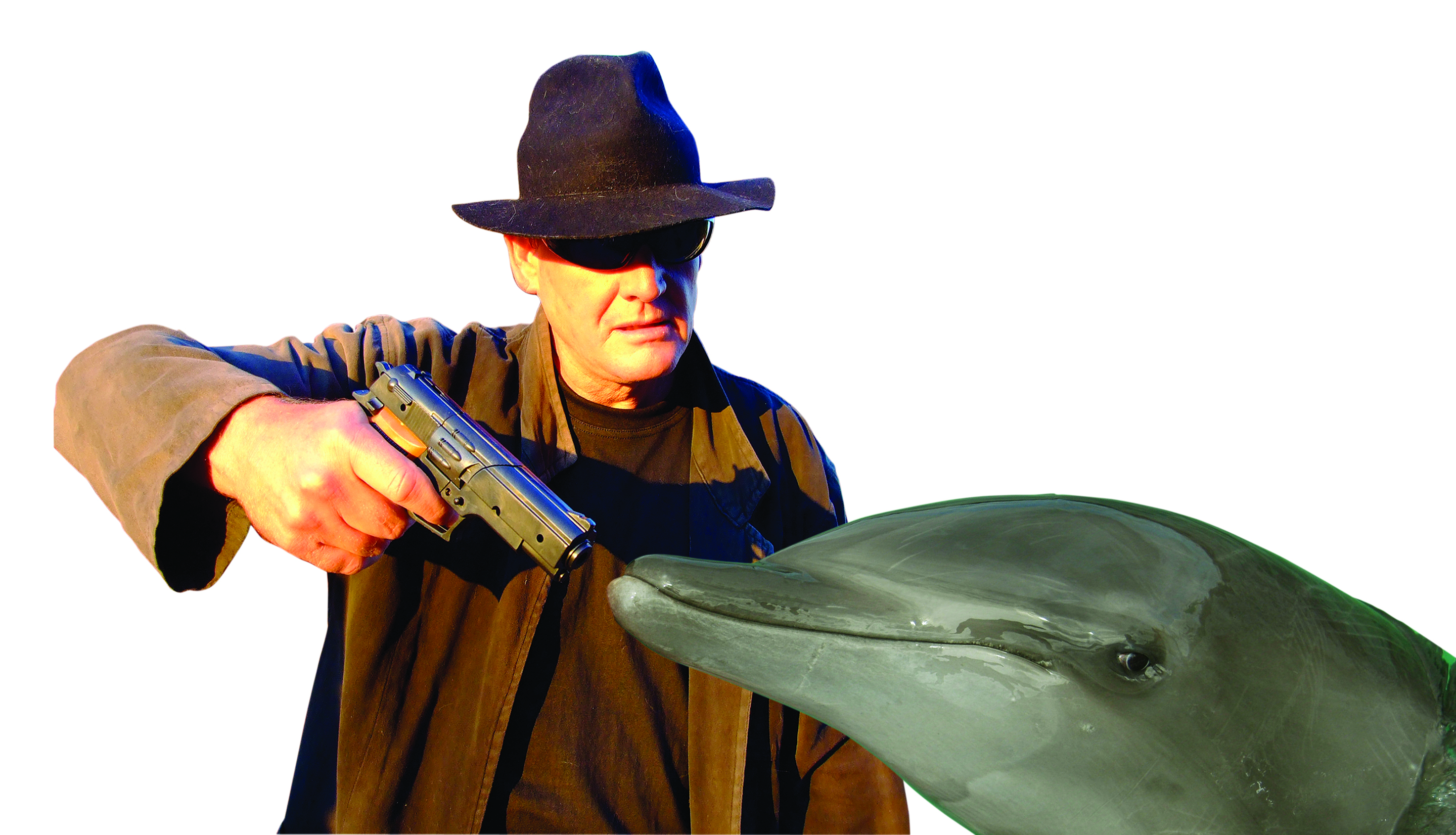 We need guns to prevent dolphins from taking over the world.