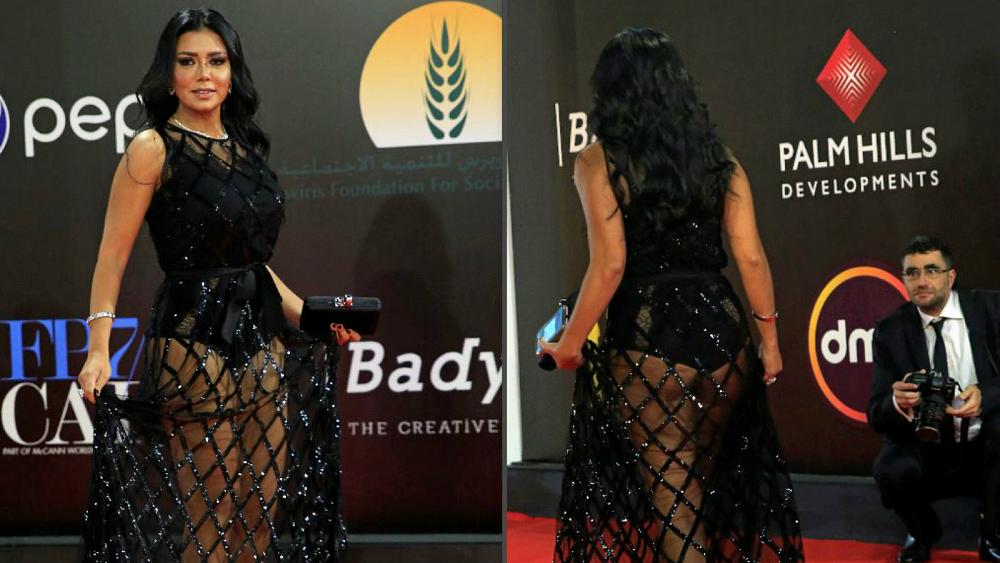 Well done on your impeccable taste in chief prosecutors. When your top man decided to put that brazen hussy Rania Youssef on trial, I threw a spontaneous Egyptian-themed party in your country’s honour. It got a bit untidy around midnight when a pyramid we’d built out of beer bottles collapsed and one of my guests lost an eye while trying to mummify the cat. This probably happens all the time at your house, right?

I, along with every other decent God-fearing man in the civilized world, was shocked to see what Youssef wore at the closing ceremony of the Cairo International Film Festival. I have studied that photograph many times and each time I grow a little bit more aroused … I beg your pardon, shocked.

That dress was so revealing that I could see her legs. Her legs! Egypt cannot afford to allow harlotry on this scale. It starts with legs and ends with the fall of Rome. History is littered with civilisations that have fallen because women were allowed to reveal their legs in public places.

Quite frankly, the idea that women even have legs does not bear thinking about. In fact, I would go so far as to say that it is the legs themselves that are at fault. If these shameless limbs did not exist in the first place, we would not be experiencing this crisis. Even if women wear dresses that reach the floor, we are still painfully aware that legs are being concealed.

The solution is obvious. When a girl reaches a certain age, she must have her legs removed. She could keep them during her school years because we need our children to bring us beer and hash pipes. After that, though, it’s off with the legs.

Where do you stand on arms and hands? They, too, can be very provocative. Especially when they are not being used in the service of men. Idle arms are the devil’s handiwork. I say cover them up or lose them.

Of course, having a population of women with no arms or legs presents its own set of problems. They are going to have go out on trolleys when they do the shopping. Who will pull these trolleys? Not us men, that’s for sure. Perhaps they could have little engines mounted on the back. No, that would be tantamount to allowing them to drive. Next thing you know, you’re following in the footsteps of that liberal, backsliding nation Saudi Arabia.

So the charge against the Youssef strumpet is one of “inciting debauchery”. Are you sure this goes far enough? What is the sentence for a crime of that nature? Probably little more than a light stoning. You might want to consider adding a charge of treason. Maybe even murder. Sure, she hasn’t killed anyone yet, but with all that wanton flashing of legs it’s only a matter of time before someone dies.

Besides, men are very easily incited to debauchery and it is not our fault. As the famous faith healer Lady Gaga said, we were born that way. I personally can’t even look at a table leg without my loins stirring. I assume people in Egypt are expected to cover up their table legs. It seems the right thing to do.

Flowers should also be banned. I suffer the most embarrassing reaction if I happen to catch sight of an orchid with its soft petals and dewy inner … excuse me, I have to go and lie down for a bit.

Okay, that’s better. So this nymphomaniac is an actor? That is no excuse. Thank goodness the Egyptian Actors Guild has said it will discipline anyone who wore attire that clashed with the “traditions, values and ethics of society”. The last thing you want is an organisation that represents artists to start defending the creative and personal freedom of artists.

I am sure your chief prosecutor is a competent man. Unlike our former chief, who was known as Shaun the Sheep although his mother called him Little Penguin, but the less said about him the better.

Fortunately there are legal precedents for a tough sentence. As you know, Laila Amer was sent to jail for two years for appearing in a risqué music video while Sherine Abdel-Wahab got six months for telling a joke about the Nile River. This latest Jezebel should get fifty years at least. Failing which, send her to me. I’ll show her a thing or two.

Anyway, best of luck with your efforts to return Egypt to the glory days of the 7th century. Those were the days, my friend.

Yours in the fight against legs,