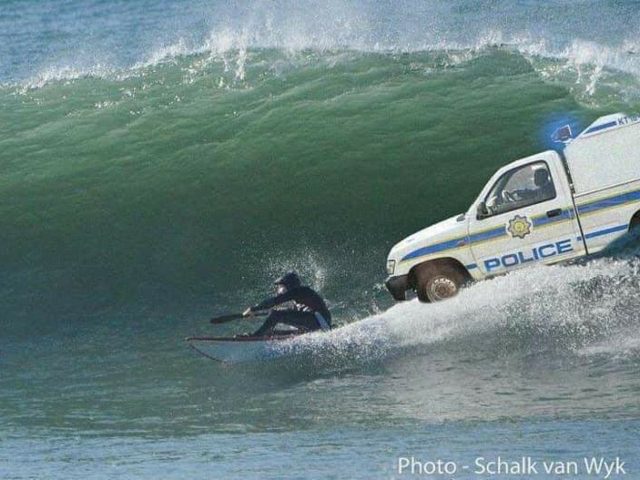 In these outlandish times, the measure of all things needs to be constantly recalibrated if we hope to stand a chance of emerging relatively healthy and sane. So I don’t know if what is happening is a good thing or a bad thing.

I went surfing the other day. Don’t judge me. I didn’t drive through the suburbs spreading death and disease to get to the beach. I walk out of my gate, over some rocks and into the big wet thing. Yes, technically I broke the Law, but I, too, feel broken by the Law, and that’s all I can say about that.

I was among a handful of outlaws bobbing about in a cold, undulating ocean. A few guys and girls in their early twenties, a smattering of wild-eyed teenagers. One kid couldn’t have been more than twelve.

The waves were on the small side and there was no aggressive hustling as there usually is at this spot. Everyone was getting their turn. The sun, fat and orange like Donald Trump but way more useful, headed for the horizon as flocks of sacred ibises flew overhead in perfect formation. Then, in an instant, the mood darkened. Four police vans pulled up in the parking lot. They were about as welcome as a swarm of orcs gatecrashing Bilbo Baggins’s birthday party.

For surfers surfing illegally, there aren’t too many options in a situation like this. You could try paddling to Australia but you’d just get thrown into one of their filthy internment camps. The best is to sit tight and hope that the cops get hungry and go back to the station for a bunch of confiscated pies.

I wasn’t too worried. I’ve been arrested before – once in the 1980s under the Police Act, which was interesting. What I wasn’t keen on was spending a night in the cells in my wetsuit. A man of my boyish good looks and natural charm, wearing nothing but a figure-hugging latex rubber bodysuit, could easily find himself in trouble. Maybe they’d let me go home and change. Slip into something less comfortable. It seemed unlikely.

The younger kids, though. They were panicking. Their parents had encouraged them to get the hell out of the house for an hour or two so that mommy and daddy can have some alone time. Now look.

Unlike sex, surfing is not a team sport. Someone might paddle over and begrudgingly give a hand if it looks like you’re drowning, but generally it’s every man for himself. The coronavirus doesn’t stand a chance. You’d have to pay a surfer to get him to give you Covid-19.

The youngest of the crew was sitting near me. He had been having a great time until the cops arrived. The unsmiling enforcers of our insane new laws had spread out, sealing off the beach, and were settling in to wait for their catch of the day.

As I said, your choices are limited. You could pretend to be a piece of kelp and stay very still and hope that a great white shark doesn’t mistake you for a wounded seal. Or you could just keep surfing and wait for cover of darkness.

“What should we do?” the kid said to me, the very last person anyone should ask for sensible advice. His little privileged face was creased with concern and he seemed close to tears.

And that’s when it struck me. In the days of yore, white South Africans saw the police as allies. You’d call the Flying Squad if you were in trouble. Or if you saw a darkie acting suspiciously by, say, walking in your street after dark.

Sure, that particular kid wasn’t around in those days, but even so, it’s unlikely he or anyone in his family had ever considered the cops to be anything other than the Good Guys.

This whole fearing, dodging and lying to the police is all very new to white people. Out of nowhere (China), a virus is rapidly causing them to rethink their loyalty to an elected government and reconsider their trust in a police service which is quite clearly more of a force than a service.

Even though most whities never really bought into the ANC as a party capable of governing, they still clung to the idea that they could call 10111 and know that help would be on its way.

Now, they’re not so sure. Now the police no longer seem like the kind of people you’d want to call under any circumstances. If you had to, say, suffer an ischemic event while out for an illegal walk at 10am, you’d call anyone but the cops. Nobody wants to face additional charges of being drunk in public because their speech is slurred. Police are trained to recognise the symptoms of drinking, not strokes.

Obviously not all cops are vicious brutes incapable of independent, rational thought. But some people simply can’t help turning into instant assholes the moment you put them in a uniform. Hitler was probably pretty chilled on weekends, slopping about the Berghof in T-shirt and leather lederhosen, getting high on Bavarian skunk while painting tastefully lit nudes of Eva Braun. But come Monday, it’s on with the Schirmmütze and jackboots and suddenly it’s all, “Erschlagen alle Juden!”

People say children are adaptable and can handle anything. I don’t know about that. The kid in the water with me looked genuinely scared. This was clearly his first face-off with a bunch of angry black men with guns and handcuffs. Rookie.

He also knew that if he was arrested, his parents would discover that he was out surfing instead of doing virtual homework in his bedroom. During lockdown, angering mothers especially is to be avoided at all costs. Having had their husbands in the house day and night for two straight months, they are perilously close to cracking. There would be repercussions. Banned from surfing and without access to his phone, there’d be no point in living. I feel the same.

A lot of white kids, unless they come from a family of self-righteous snitches, are discovering that the authorities are not necessarily on their side. It’s quite an awakening. Breaking the law is a novel experience for a lot of whities and there’s a good chance they will develop a taste for it. As I said in the beginning, I don’t know if this is a good thing or a bad thing. It could go either way.

I didn’t surf today. Instead, I poured myself a bootlegged gin and tonic and stood in my sand dune of a garden, watching the sun melt into the sea. I saw a dad push his kid onto a wave. He couldn’t have been more than seven or eight. The kid, not the father, although they do start young in these parts.

Life seems so much better when the police aren’t around.