Quite a few white South Africans long for a return to the past. I am one of them. However, while the past they hanker after goes back to the time of PW Botha, I’m more interested in returning to the Golden Age where immortals mingled freely with the gods and there was peace and harmony and nobody had to work.
I don’t know what their flag looked like. Perhaps they didn’t even have a flag. It was a busy time, what with ruler Cronus castrating his father, Uranus, then marrying his own sister Rhea and having six children with her, five of whom he ate because his mother Gaia had told him he’d be overthrown by one of them, but little Zeus survived and was suckled and raised by the divine goat Amaltheia on the island of Crete before going on to make quite a name for himself. Zeus, not the goat. So you can imagine there might not have been time to fiddle about with flags.
I only mention flags because one of them caused a bit of a stir recently. A group of friends visited Brian’s Pub at the less salubrious end of Sea Point’s Main Road and spotted the old South African flag up on the wall. This was followed by a lively discussion and the summonsing of the police, who promptly arrested the complainants. This is standard operating procedure for Cape Town cops.
I lived in Sea Point for a few years and played pool in that pub a couple of times when it was still known as Brian’s Late Nite Tavern. It was a real dive and stayed open longer than any other bars in the area. Around 2am it would begin filling up with junkies and hookers and other creatures of the night. It was great. I don’t remember seeing the old South African flag on the wall. Then again, anyone who drinks at Brian’s is there to forget.
Owner Brian Dunn defended the flag. “That flag did nothing. It’s the politicians that did the problem, not the flag,” he said. “I have all the old flags like Namibia … I have the old Rhodesian flag hanging there also.”
Er, Brian? The old flag of Namibia is the same as the old flag of South Africa. And your Zimbabwean staff, if you have any, must really appreciate having the Rhodesian flag up. After all, it’s not the flag that ruined Zimbabwe – it’s the British. No, wait. It’s Zanu-PF. This is confusing.
A white Namibian-born friend of mine subsequently called for a boycott of Brian’s Pub on her Facebook page. First out of the woodwork was 52-year-old Bernard Herbert of Cape Town. 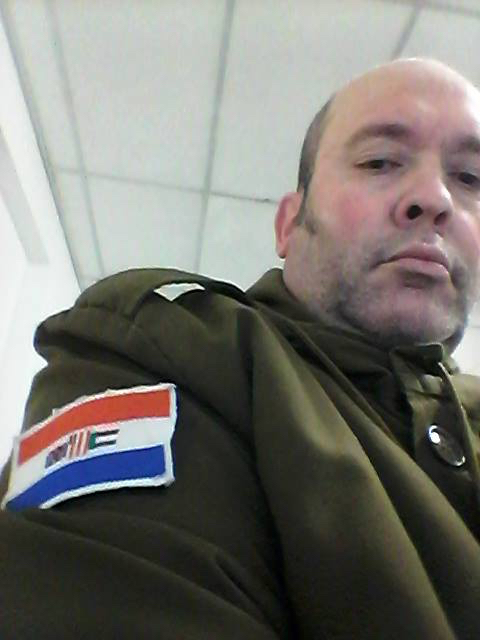 He asked people to join him in “shoving it in the face” of my friend. “The Oranje Wit & Blou is not illegal, and it is the flag I served under in the SADF. IT STAYS ON MY SLEEVE!!!” he shouted, spraying his cat with spittle.
Repeatedly claiming an IQ of 140, which seems about as likely as Mzwanele Manyi not being a Gupta stooge, Herbert says he is openly proud of his heritage. He must have had some spittle left over because he added, “I especially spit on whites, who make negative comments, while misinterperreting who I am and make judgement and especially, who are traitors to my people, siding with the ideals of those oppressing us!”
A devoted Mormon, our boy says he leads a clean and virtuous life. He pays his TV licence and his etoll account is in credit. That’s right. In credit. As if that’s not enough to question his mental health, it’s also apparent that the best years of his life were spent in the army.
In fact, General Jannie Geldenhuys inducted Rifleman Herbert into the SA Defence Force Association in April this year. His certificate reads, “You as a Military Veteran are recognised for your contribution in the development of the RSA, the sacrifice you made and the price you have paid in serving South Africa selflessly in the South African Defence Force.”
When someone on Facebook called him a wanker, he was quick to point out their error. “Why would one masturbate when they have a wife they can turn to at any time?” Even when she’s cooking or cleaning, I presume. “Don’t stop, honey, this won’t take long.” If only we all had such accommodating wives.
Another snowflake libtard enemy of the alt-right asked why he stayed in Africa instead of moving to, say, Holland. I might be wrong, but I have an idea the Netherlands isn’t exactly clamouring to award citizenship to the likes of our lad Herbert. The Trump administration, on the other hand …
His response, “Because I was born on African soil and I do not yield for anybody, especially when five of every ten of them is mentally retarded.”
Claiming first-hand experience of “the barbarity of those peoples who came from up north”, he said he “saw it in Rhodesia, bearing arms at the age of 9, I saw it serving in the glorious SADF …” I’d heard tell of Ian Smith’s fearless child soldiers but until now I never really believed they existed.
In an earlier post, he says, “I am wearing my browns today, as every day. I still stand alone ready ‘om aan te triej‘ with the first available resistance force …” I suppose it does cut down on the laundry bill.
Herbert says he lives in harmony with the teachings of the Church of Jesus Christ of Latter-day Saints and denies being a racist. It’s the other people who are racists. Them. The ANC. And the criminals in gummint.
“The only thing is that they are not tried and convicted for these crimes because they protect each other. They have long met the equivalent of the Gadiaton robbers in the Book of Mormon and I will take the stance of Captain Moroni very soon.” No need for the i, there, Captain.
He refers to “the terrorist Mandela”, bemoans violence against white people and accuses law enforcement agencies of being “involved in the racist and apartheid like oppression and stripping of justice for white South Africans”.
He goes on. “At a point we will have no choice but to defend our rights through an armed conflict, and I intend to be on the anti racism side of that conflict, as defined by President Hinckley.” President who? I visited the communist enclave Google for answers. Ah. A former leader of the Mormon Church who died in office at the age of 98. A bit like Mugabe, then, except mortal.
Shockingly, Rifleman Herbert doesn’t agree with people of the same gender raising a child. “Liberals would chain themselves to parliament if man intervened by giving lambs to lions to parent, yet they okay with humans being allowed to.” Absolutely. A lamb’s place is on the braai. Also, lions are gay.
He pledges his support to Vlakplaas killer Eugene de Kock, who he describes as “a friend and patriot” and in a couple of posts references the extreme right Suidlanders – which seems to be Herbert’s organisation of choice. He also describes the recent Knysna fires as a “purposefully executed plan by a terrorist network” and warns people to have their evacuation plans ready.
He denies that this is “prepper sensationalism” saying “We have had a current Colonel in the SAPS brief us at a meeting recently … Let me put it this way, he does not think we are nutcase prophets of doom!”
When someone calls him a “sorry soul”, he responds, “I chose my leaders and the ANC and those things that are anything but honorable that sit in that joke called parliament are not my leaders. I chose to subject myself to my leaders too, because we are a team and we will win, as we have before.” I expect he’s talking about Blood River.
The other day he posted a video of himself walking down what appears to be an empty street in the Cape Town suburb of Du Noon singing Die Stem to prove some or other obscure point.
A word of advice. If you do bump into Bernard Herbert, don’t mention the flag.