Mosquitoes have begun sending out the recces early this year. They’re coming in at high altitude late at night – not in packs, but in pairs. They split up once they’ve gained entrance to the bedroom. One makes for the head, the other the feet.

Being a reconnaissance mission, they are meant to check out conditions ahead of the summer advance, then leave quietly. But there are always one or two who can’t help themselves. Like some of our recces in 1976 who just had to push on to Luanda, these little suckers are hanging for a hit of blood so bad that they throw caution to the winds and embark upon a frolic of their own. Let it be said that they don’t always make it back to base.

Soon the mosquito queen – there hasn’t been a king since the Great Slapping of 1984 – will summons her wing commanders. The chief spokesmozzie will read out the reports from the scouts who have travelled from Port Edward to Kosi Bay, from Durban to wherever Kwazulu-Natal ends and Mordor begins.

The queen will put it to the vote. Is it properly summer? Are the targets slow enough? Drunk enough? Mosquitoes are easily excited – especially when their blood-blood levels are low – and the vote, conducted by a show of proboscises, will be unanimous. We attack at 3am.

I need to get out before the onslaught begins. Cape Town has three mosquitoes and a summer that doesn’t leave you perpetually drenched in sweat. I spent seventeen years there and only returned to the east coast after Brenda showed signs of being a lot colder and madder than all the winters put together.

My plan, if you can even call it that, is to spend summers in Cape Town and winters in Durban. However, due to the sudden but not altogether unforeseen change in my marital status, I no longer have a home there. This would mean having to rent. Given my budget and the feeding frenzy of greed around Cape Town’s property market, I’d be lucky to get an asbestos box downwind of Koeberg.

I am going to have to rent out my Durban spot and use that money to get something a bit closer to the action. I wouldn’t go so far as to say my place isn’t fit for human habitation, but it will certainly take more than a rug to pull the living room together.

I have four dining room chairs that were ripped to shreds by the cats formerly known as ours but which were really hers. I assume it was the cats. It could just as easily have been the ex sharpening her teeth late at night when the full moon was out. When I took them in to be reupholstered, the dude asked me what colour material I’d like. I told him it didn’t matter because I lived alone. He seemed to understand.

I don’t have a colour scheme. Or a scheme of any kind, really. I bought a microwave oven that’s too small to accommodate a dinner plate. All my meals are on side plates. The bathroom hasn’t had a light for months because I can’t get the cover off. None of the windows have curtains. I hung two metal elephant heads on the wall, knowing their protruding trunks would almost certainly put someone’s eye out. The beds are pushed up against the wall like prostitutes and their bases are naked. The local monkeys seem to think the place is theirs.

I want to advertise it on the accommodation site Airbnb since this would give me the flexibility to return should something unexpected happen, as I fully expect it to. It also means having to make an effort to get it looking more like a B&B and less like the result of senile squalor syndrome. The thing is, I can’t do it on my own. I need a woman. Studies have shown that women are genetically predisposed towards interior decorating. They understand what goes where and why. They understand colours. They understand concepts like flow, light and space. I don’t even understand how my stupid miniature microwave works.

I am, however, currently between women. And should I solicit advice from those with whom I have had dealings and dalliances, I’d be lucky to get more than a two-word response. One of them obviously being ‘off’.

So I did the unthinkable. I had a sex change. No, I didn’t. That wouldn’t help at all. I’d still have my useless man brain. On the other hand, it would allow me to become a lesbian and have sex with women. Hang on. I haven’t thought this through properly.

Anyway. I did the next most awkward thing. I went to the CNA and looked for a home décor magazine. Inexplicably, many of them insist on featuring gardens. I live in a complex. The garden is not my responsibility and plays no part in my life. I have a vague sense it’s out there somewhere, but beyond that I don’t really care what it does.

I wanted ideas on fairly basic stuff. Like how to make a bed look as if Charlie Sheen hadn’t just spent a week in it. And how to use scatter cushions without making Liberace seem butch. Also, where to put two enormous couches and a wooden table that were removed from the huge marital home in a fit of pique but which aren’t altogether suited to the new, reduced circumstances.

There were at least thirty magazines dealing with homes. In the end I settled for a pack of three. One of them was called Beautiful Kitchens. Every one of its 146 pages has to do with kitchens – a room most women hate being alone in and which most men know only as the place where the fridge lives.

I got home and saw they were all British magazines. That’s no good at all. Ooh, what a lovely lamp. And it’s … let me get my calculator … only R48 000 excluding shipping! What a steal. I’ll take a dozen.

After flipping through these magazines, I realised two things. One, that I’m not gay. And two, interior decorating has more to do with the actual structure than it does the decorations. For a start, it helps to have a fireplace, high ceilings, a staircase, wooden floors and bay windows overlooking two horses in a field.

People who peruse these periodicals are presumably looking for ideas. Well, I had one. It involves flying to London, catching a train to Wiltshire, going around to Andrew and Amanda Bannister’s converted 19th-century Baptist chapel, ringing the bell and, in the unlikely event that they open the door instead of unleashing the hounds, saying, “Love what you’ve done with the place. May I have it?”

I found this decorating tip. “Paint all the walls white, then wait a while before choosing a colour. That way you get used to the effect of the changing light.” You would have to be mental to follow this advice, and not only because it’s utter gibberish. I repainted my bedroom a couple of years ago. There was so much screaming and swearing that the body corporate sent someone around to have a word.

I can only assume advice like this is given by people who can afford to pay others to do the painting.

I don’t want to read about “intimate seating areas where you can curl up with a good book”. If I’m going to get intimate, it’s damn sure not going to be with a book. And at my age I want to be able to stretch out on my back at the first signs of intimacy.

“Jane and Roger have a Buddha from Nepal that creates a beautiful focal point.” I have an aggressive gecko from Westbrook. It creates a terrifying focal point for herpetophobics.

Decorating tip: “If you’re unsure about choosing colours for a room, just pick out an accent from a cushion and build the scheme around it.” Bru, I don’t know what you’re smoking, but if your cushions are talking to you in any kind of accent, regardless of what scheme you’ve got going, you need help.

“An off-white wall makes the perfect backdrop for a set of antlers.” Indeed. There is nothing quite like the skull of a dead stag above your bed to get you in the mood for love. Especially if you’re wearing pyjamas made from the foreskins of baby otters.

These magazines are full of attractive white people with perfect teeth and matching dogs and children called Jay, Poppy or Milo. They are constantly stumbling upon run-down farmhouses or barns and turning them into paragons of gorgeousness awash in Louis XIV couches. Here, we have run-down farmworkers sleeping on couches from Louis Fortuin Furnishers there by the bottle store.

Meanwhile, let me know if you want to spend summer in an eclectically furnished simplex on the north coast. Bring your own side plates. And mind the elephants. 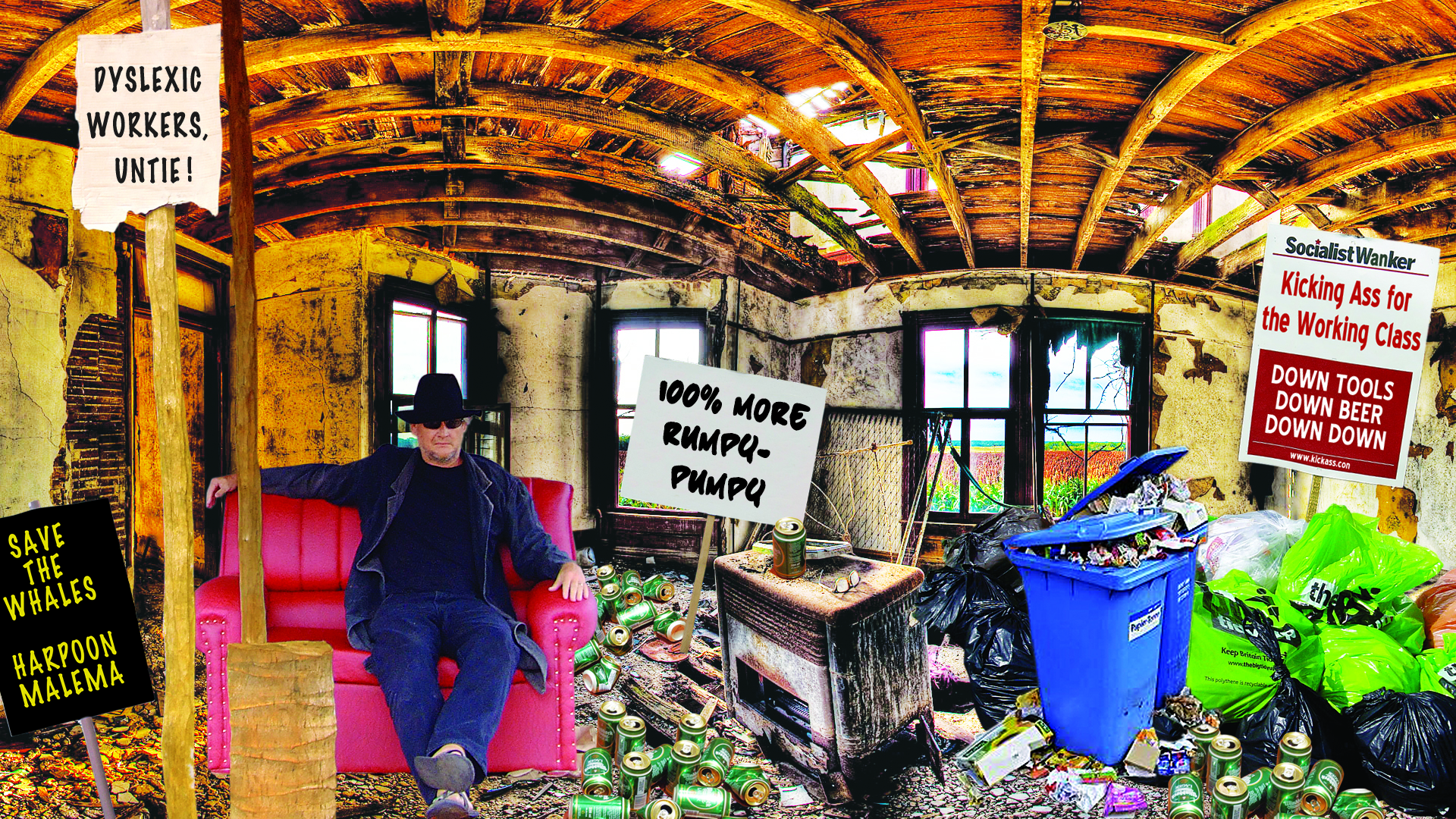 Ben Trovato takes a break from protesting to redecorate his home.