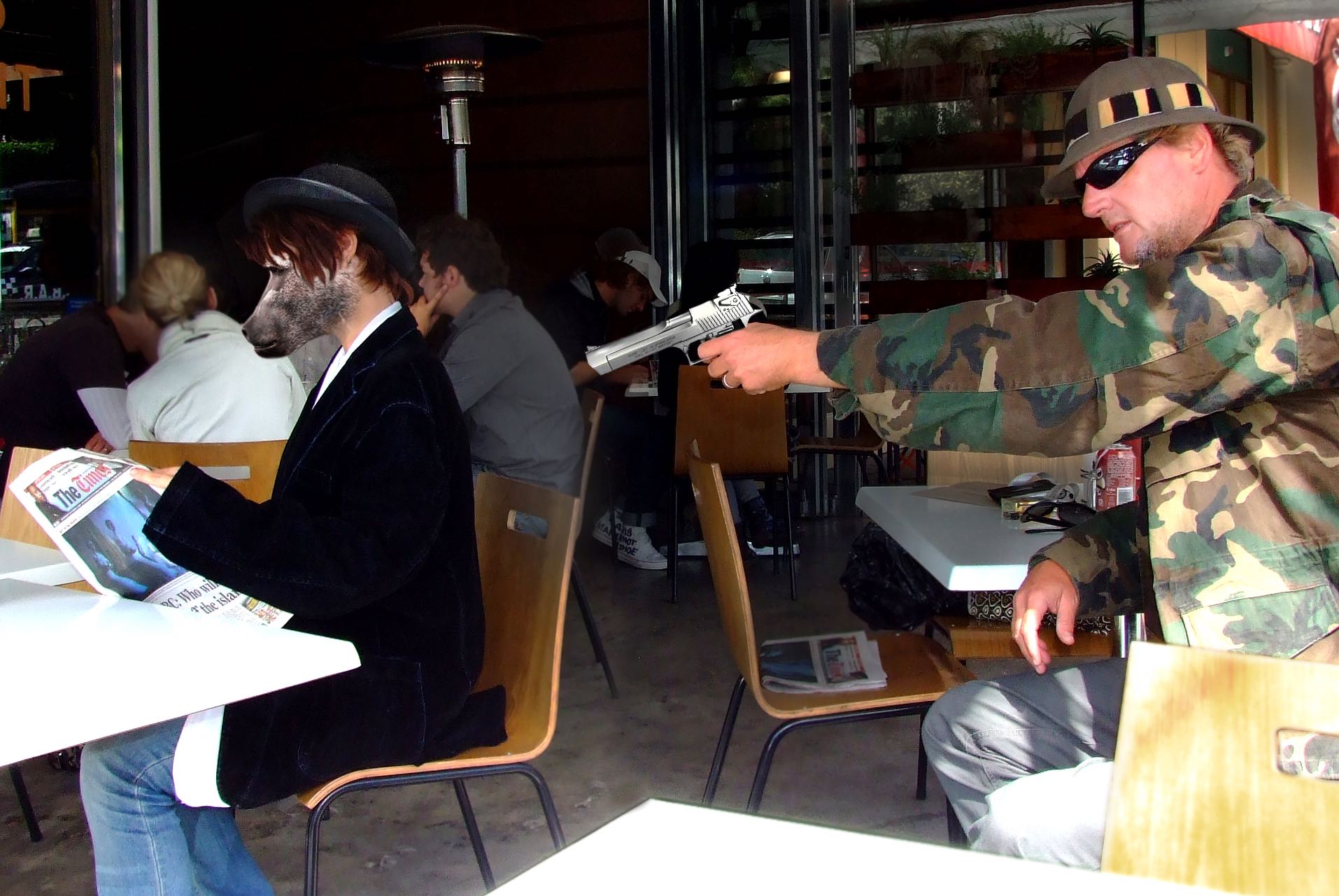 Down in the Deep South, we give our baboons names. Like George and Jezebel and Kataza. Ah, Kataza. Who among us has not heard of your tales of derring-do? Now you’re in trouble, bru. Try a little derring-don’t next time. If there is a next time.

Kataza was out and about with his extended family near the village of Kommetjie when he was kidnapped. Snatched in mid-forage. Bit rude. Next thing he knew, he was in the relatively larney suburb of Tokai. What the hell, he wondered, scratching his balls and pondering if he hadn’t perhaps eaten one of them magic mushrooms from Scarborough. This was definitely a trippy fucked up scene. Where am I? Where are my people?

His crew, meanwhile, had no idea what the hell just happened. The boss was here one minute and gone the next. Like Gavin Watson, only more honourable.

The kids and wives never received a ransom note because that’s not the way the City of Cape Town’s Human Wildlife Service operates. For a start, they don’t call it kidnapping. They call it “re-homing”. Nice. Makes it sound so much more civilised. I, myself, have been re-homed repeatedly over the years. Times I traded up, times I traded down.

Out here, on the last jumping off point for white people, baboons get rap sheets. Kataza apparently earned a reputation as a bit of a naughty boy. Not as naughty as Jan van Riebeeck, but he was after people’s stuff. Not their land, minerals and women, obviously. But other stuff. Fruit, mainly.

Kataza stopped scratching his balls, sat very still and narrowed his already narrow eyes until they were mere slits in his hairy head. To the casual non-baboon observer, he looked like a baboon asleep. Or a statue of a baboon. But why would anyone build a statue to a baboon? That’s crazy talk, that is.

Kataza reckoned this was definitely trading down. Especially since another troop was watching him from a distance. They weren’t exactly rushing over with gifts of roots and grubs to welcome this weary stranger into their midst. In fact, there was a bit of barking. And not the good kind either. Different accent, for a start. The Tokai massif. He’d heard of them. Liked to think of themselves as badasses because Pollsmoor Prison was their turf. Kataza sniffed derisively and yawned. Bunch of pussies, he thought. Because that’s what the Kommetjie posse thinks about everyone.

What he didn’t know was that UCT ecologist Prof Justin O’Riain had been on the radio telling everyone that he (Kataza) was integrating with the new troop and was even being approached by females. I don’t know if the prof has ever been approached by females, but I know from experience that this is not necessarily a good thing.

The prof said Kataza had, before being snatched, been sneaking off with a bunch of “low-ranking females” and shagging them senseless. Is that so bad? Deserving of rendition? Apply that to men and you’d have to snatch or shoot almost all of us. Low-ranking females are the best.

The City says Kataza has better breeding opportunities where he is now. So … you’re saying you did this for him? Because the Tokai girls are hotter than the Slangkop girls? What the hell, bru? How do you even know this? What kind of study are you doing here?

Whatever it was, Kataza felt uncomfortable. What he didn’t know, because his phone had been charging in the electro-fynbos at the time of his kidnapping, was that good humans had created a Bring Kataza Back page on Facebook where they used the exact same idea he had in his own mind.

“Kataza has been kidnapped from his troop and dumped in hostile territory”. If Kataza had been on Facebook, he would have been thrilled to see this. For a while, anyway. Eventually the adverts, recipes and cat videos would have driven him insane.

Kataza considered heading home, but it seemed a very long way away, although it wasn’t really. A bit of a drive at rush hour, sure, but he’d traded his wheels to the incumbent in return for control of the troop. Unlimited access to the naughty low-rankers in return for a rusty old crock with brake issues? No brainer.

Unlike humans, who heave a sigh of relief when the alpha male leaves the room – or even better, the country – baboons quite like having their alpha dude around. He protects them from enemies like leopards and Sanparks officials. He knows which homes have the best humans – the kind who are one with the universe and don’t believe in, like, locks and closing windows and things.

Meanwhile, Kataza was in a quandary. Although he’d never admit it, he had known from a young age that he would never be a contender in the Best Sense Of Direction competition. Not that this was ever a formal thing. Baboons were meant to instinctively know their way around. Kataza had other instincts. It was a tough call. Get the fuck out of Tokai and risk ending up among predators? If he had ever bothered to watch The Lion King, he would have known that lions have baboons’ backs. There was no one around to tell him hakuna matata, bro.

What you don’t want to do in Cape Town is sit around in the belief that someone will come along and help you. It hardly ever happens to humans, let alone baboons. Kataza didn’t know this. But he should have known that his people rarely send out search parties for missing alpha males either. In the back of his weird baboon brain, he probably knew he was screwed.

But he’s not stupid. He comes from the Deep South and knows in his blood there are good humans and bad humans. One of the good ones is Jenni Trethowan. She came looking for him and found him in Tokai. Jenni speaks baboon with a Kommetjie accent. Kataza knows her. Knows she’s cool. If the anti-baboonists employed by the council would like to shoot anyone, it’s Jenni.

Kataza started following Jenni home but one of them got distracted after finding something to eat, probably Jenni, and things fell apart. Or perhaps he saw Jenni’s car and thought not a fuck am I going home in that.

There was no way the council was putting up with this. Cape Town didn’t get to be the best city in the country by letting things slide. The DA ward councillor for the Deep South promised that Kataza wouldn’t be killed and would be allowed to go home. Just as long as it wasn’t on the last train to Fish Hoek, or he’d definitely get stabbed. Not that trains are a thing any more.

This morning (Wednesday) there were reports that the warriors of the Human Wildlife Service were out there at dawn driving Kataza back to Tokai with all the enthusiasm of Seal Team 6 driving Osama bin Laden into a room with no way out.

There’s a Baboon Hotline you can call if you spot Kataza, but word on the street is that’s akin to putting out a hit. The municipality is heavily stacked with humans. Pretty unfair, but that’s how the planet rolls.

27 thoughts on “Add one baboon and stir well”