I caught a snake on my eleventh birthday. Not one of those scary big-ass mothers that can squeeze you to death and swallow you whole. I didn’t grow up in the Amazon jungle, even though my table manners tell a different story. It was a grass snake about as long as my fibula. I kept it in an empty fish tank and would take it out and play with it when I was bored. The snake, not my fibula. That’s the kind of crazy shit Oscar might have done as a kid. Not that he had fibula. He might have had a snake. I don’t know. You’d have to ask him. Even then, he’d probably lie about it.

They’re not much fun, snakes. For a start, they lack a sense of humour. You won’t find mambas playing with a ball or a puffadder chasing something just for the hell of it. I tried to teach my grass snake a few simple tricks but we never really got past “play dead”. I eventually turned him loose. He livened up considerably at that point, then made a sound in the back of his throat and disappeared into the shrubbery, never to be seen again. I like to think he was laughing. The bastard was probably swearing at me in Parseltongue.

I am very surprised that my contact with a snake at such a young age failed to lead me into the arms of Satan. Instead, I became a journalist. There are jaded cynics who would say that’s two sides of the same coin.

Snakes, as we all know, are the devil’s handiwork. Lucifer clearly has all the creative skills of a five-year-old child who, upon being given a bag of plasticine, is able to make nothing more complicated than snakes. Fat ones, thin ones, long ones, short ones. That’s about it.

Some disagree, insisting that snakes are entitled to their place on earth. Their minds have been poisoned by the shameless propaganda shown on Animal Planet and National Geographic.

The vital task of warning society of the perils posed by these godless, legless creatures falls to pillars of society like Suzette Farmer of Ocean View. I happened upon a letter she wrote to a community paper serving the residents of the Cape peninsula.

Suzette describes Ocean View as “a beautiful community lying in a valley surrounded by mountains and the sea”. Other people, undoubtedly possessed by the devil, might describe it as a rundown coloured township surrounded by gangsters and poverty. Luckily, Suzette knows what is behind the rampant crime and drug abuse. And even better, she has the solution.

“As a religious person, I believe all these issues are because of a serpent lying in the middle of Ocean View. He moves on his belly around Ocean View and he just ended up in Atlantic Heights with two more shootings last week.”

Snatching my camera bag from beneath the comatose cat, I pushed my car out of the garage, crash-started it and headed off to Ocean View. It’s only ten minutes from where I’m staying, but I had to move fast. This was a world exclusive. Once the sun went down, the tabloid reporters would start leaving their crypts. A giant snake moving through the township leaving a trail of murder and mayhem in its wake. They’d sniff out a story like that in no time at all.

Like most ‘suburbs’ developed in line with the public-spirited Group Areas Act, Ocean View becomes increasingly labyrinthine the deeper you penetrate. It wasn’t long before I was hopelessly lost. I couldn’t see the ocean and the only view I had was of a tin shack and a pit bull on a chain. I got out and went over to a huddle of people on the corner. I was offered tik, weed, heroin and ten minutes alone with someone called Fran or Shan. It seemed excessive, what with the sun still being up and all, so I declined.

“I’m looking for a snake,” I said. “A big motherfucker.” They took a step back, muttering and shaking their heads. A man with two gold front teeth and a spider web tattooed on his neck made the sign of the cross.

“Bless you too, dude. But I really need to find that snake.” He said he was giving me directions and that if he ever had cause to give me a blessing, I should know that it would swiftly be followed by a bullet to the head.

Ten minutes later I rounded a corner and saw it. Satan’s spawn was spread out on its belly, brazen as you please, in the middle of a playground. It was huge. Apart from in the movie Anaconda, I’d never seen a snake that size.

I pulled over and, leaving the engine running, got out with my camera at the ready. I was within fifty metres of the brute when, out of the corner of my eye, I saw three kids running towards it. I shouted and waved my arms, knowing that my actions could alert the serpent to my presence. Rather it turned on me than innocent children. The city would probably want to give me some sort of award. I hoped it wouldn’t be posthumous.

The kids ignored me and I watched in horror as they leapt onto its back and began running up and down its spine. It’s not going to like that, I thought, snapping off a few frames. On the other hand, a kid thrashing about in its powerful jaws would be the money shot. But the snake didn’t react. Was it dead? I walked over and gave it a kick in the mouth. Nothing happened. The girls laughed and jumped up and down. The boy told me not to kick his snake. He was about eight. Old enough to heft a 9mm Parabellum. I apologised.

I noticed graffiti on the snake. Of course. You build a concrete snake in an area like this, there’s going to be graffiti on it before you’ve finished the tail. Bitterly disappointed, I took a few shots and asked the kids what they thought of the snake. They said they smaaked it and demanded to see the pictures I’d taken. 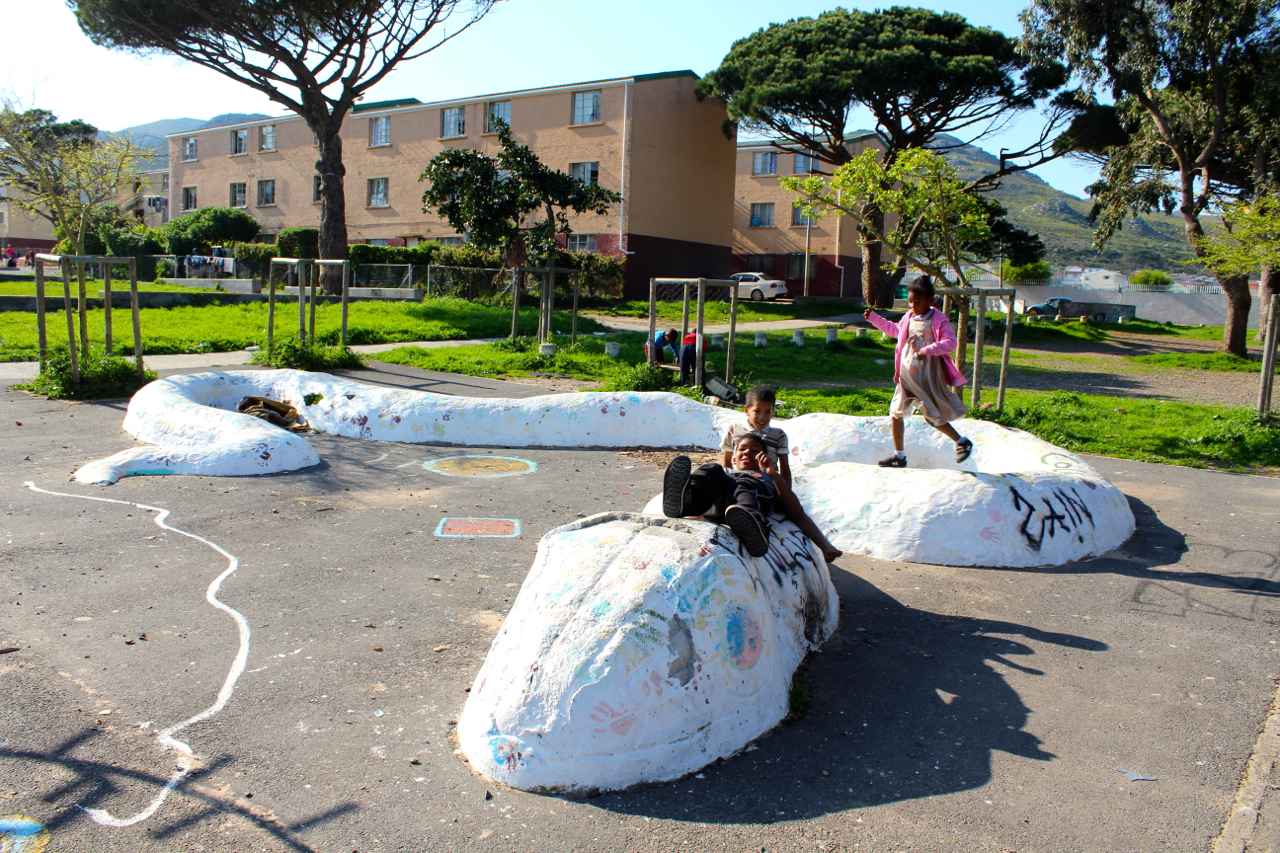 I went back to the car and read the rest of Suzette Farmer’s letter. Was she hallucinating? How could a concrete snake – a badly made one at that – be responsible for the general menace and squalor that pervaded the area?

“What message do we pass on to our children?” she cried. “Is it not about time to get rid of this serpent?” I felt an unseen hand run up and down my spine. I turned around. A toddler had climbed into the back of the car and was frisking me.

“Why should children associate themselves with snakes? Churches are praying for peace, but the serpent still rejoices for what’s happening in Ocean View.”

I looked across the buckled, glass-strewn tar. The snake showed no signs of rejoicing.

Reaching into her evidence bag and pulling out the Bible, Suzette Farmer proclaimed: “The Lord God said to the serpent, ‘Because you have done this, cursed are you more than all cattle, and more than every beast of the field; On your belly you will go, and dust you will eat all the days of your life.’”

That seems a bit unfair on cattle. Perhaps they were different in those early days. Perhaps the cows banded together and fought against being turned into burgers and steaks.

Suzette’s implored the city to banish the serpent and replace it with a different animal.

“Why not use one of the sea creatures for children to play on?” A great white shark, perhaps? No. Too deadly. A seahorse? Too weird. A crayfish? Ocean View is full of poachers. Everyone is sick of crayfish. Wait. I’ve got it. A jellyfish. A non-suggestive lump of concrete with a few discreet tendrils. Perfect. Fun for the whole family.

A week later, I picked up the new edition of the community paper. Suzette Farmer’s letter had struck a chord. Abdullah Kamaldien, another Ocean View loyalist, agreed that the snake should be demolished because “it bears no positive image to our children”.

“With permission from the City of Cape Town, the community – young and old – should use chisels and hammers to remove it!”

While he made no mention of burning torches, they’d certainly come in handy should the exorcism continue into the night.

Suddenly I had a new story. A lynch mob descending on the playground, baying for the blood of the concrete snake. The sound of hammers hitting chisels, smashing into the snake. The cry goes up. Get the head! The head! Kill the head and the body will die!

Once the serpent from hell has been smashed to bits, Kamaldien would like to see a more suitable feature rise from the rubble. Unlike Suzette, he makes no mention of sea creatures.

“Concrete anchors would be a better theme. Anchors symbolize stability. Swaying flotillas need stability.” Yes, I can see the progeny of Ocean View having endless hours of fun with concrete anchors. As a child, I dreamed of someone building a concrete anchor in my local park. Sadly, it was not to be. And today, more often than not, I find myself adrift, swaying along with the fickle flotilla of humankind.

Kamaldien ends his letter saying, “More suggestions are welcome regarding the replacing of the serpent”.

How about a praying mantis? Or a frog? A bat? Perhaps we should forget about anything modeled on the insect or amphibian world. After all, it’s explicitly stated in the King James Version of Leviticus something-or-other that “every creeping thing that creepeth upon the earth shall be an abomination”. Reading between the lines – which is really the only way to read the Bible – I think it’s meant more as a “ye shall not eat” these things that creepeth, but there is a paragraph that says “ye shall not make yourselves abominable with any creeping thing that creepeth, neither shall ye make yourselves unclean with them”.

I expect there is a chance of coming away fairly unclean after spending a couple of hours rubbing up against a concrete snake. As far as the other is concerned, I have seen a lot of people making themselves abominable on a Friday night with no help from any creeping thing that creepeth.

Ocean View’s socio-eco-crimi situation is replicated in townships around the country. So my message is this. Find your concrete snake, people. Find it and destroy it. If Suzette and Abdullah are right, and there is no reason to think they aren’t, we can transform this country overnight. I’d suggest you use dynamite because, let’s face it, the hammer and chisel option takes forever. And there is no time to waste.

I feel like such a fool. All along, I have been labouring under the misapprehension that bad parenting, poor policing, ineffective teaching, misdirected preaching, municipal apathy and the after-shocks of apartheid are to blame for the poverty, crime and violence wracking our townships. Meanwhile, it’s all because of goddamn concrete snakes.

Once we are finally freed from the ophidian clutches of these viperous infidels, we will celebrate with magnificent communal braais across the country.

There shall be lamb chops and scapegoats for all!

2 thoughts on “An evil game of snakes and adders”