I knew this assignment was going to be different the moment I got the call. “How would you like to join the King of the Zulus in ogling thirty thousand topless virgins?” I was packed in under ten minutes. 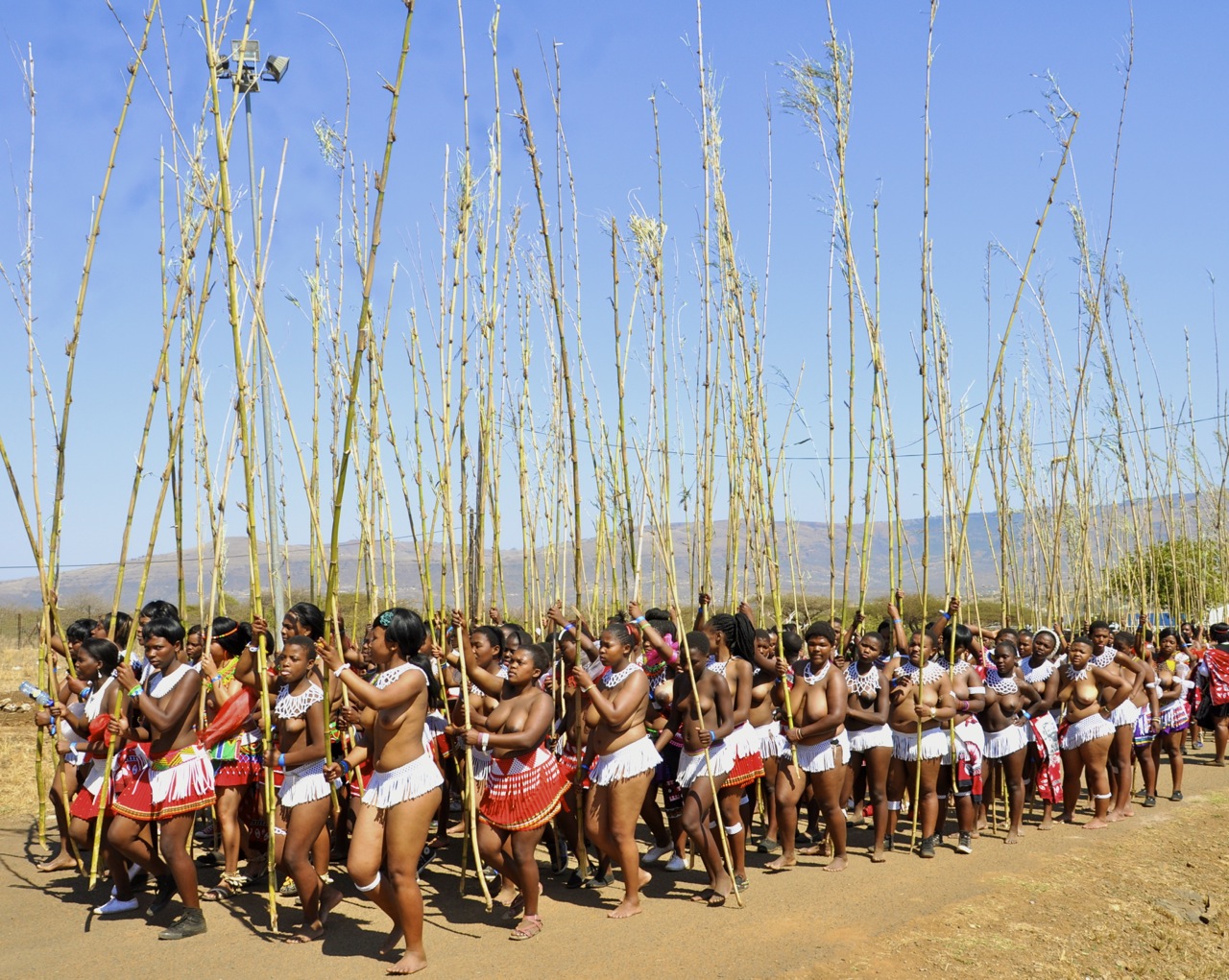 The Zulus know it as uMkhosi woMhlanga. White people know it as the Festival of the Boobies. That might not be true. I think they know it as the Reed Dance. Or, more likely, a monumental waste of taxpayer’s money.

I can’t remember ever having been to Eshowe but I must have because by the time I left home, shortly after my 38th birthday, my parents had taken us everywhere within a 500km radius of Durban. I was expecting the mayhem of Mthatha but was pleasantly surprised to see the main road occupied almost entirely by cars and not being shared with a billion pedestrians, hawkers, faith healers, bandits, donkeys and dogs.

It is said the town’s name came from the sound of wind passing through the long grass. I don’t know about that. I’ve passed wind in long grass before and I can tell you it sounded nothing like eshowe.

I was booked into a guesthouse on the edge of a forest and the stress of the drive dissolved quickly as I set about viciously abusing the minibar.

“Eshowe is wrapped around the Dlinza Forest which covers 250ha and divides the town.” How refreshing to have a town divided by a forest instead of race.

The booklet also listed 55 birds that can be seen right there in the garden. I saw one from where I was lying on my bed. It was a hadeda – the antichrist of the avian world – so it doesn’t really count. A 56th bird had been added in pencil at the bottom. The Southern Black Tit. I like to think it was included as a nod and a wink to the Reed Dance, but it seemed improbable. These were serious bird people.

The British fort now houses a museum. Among the artifacts is a replica of a silver beer mug given to King Cetshwayo by Queen Victoria in 1882. I can imagine the conversation in the drawing room.

“I honestly do not know what to get that Zulu man. They really are appalling people to buy for. What on earth does he need?”

“Give him whisky, my dear. They do love their drink.”

“Don’t be silly, Albert. The poor man came all the way to London to tell us that his people would refrain from throwing spears at our soldiers if he could have his kingdom back.”

“What a delightful idea. Drink up and give it to the servants to wrap. Tell them not to use the good paper.”

Route 66 might not be as well known as its American counterpart, but it has its own unique charm in the roadside litter that drifts and glitters all the way from Eshowe to Nongoma.

One can’t see the Enyokeni Palace from the road. Truth is, one struggles to see it from several metres away. Mainly because there is a fence around it, but also because it’s not a palace in the strictest sense of the word. Buckingham is a palace. Versaille is a palace. What King Zwelithini has is an assortment of thatched huts. I would go so far as to say that Zuma’s spread in Nkandla is more opulent than Enyokeni, although these days opulent is rarely used to describe anything that has a roof made of dried grass.

My fixer – or, as Deputy Minister Kebby Maphatsoe might have it, my handler – parked the car for an easy getaway. I thought he was being overly paranoid. He gave me the lazy eye. “I have two words for you. Piet. Retief.”

I have never underestimated the Zulus. As far as tribes go, they’re right up there with the best of them. I like the Zulus. I really do. I grew up around them. Or rather, thanks to the Group Areas Act, they grew up around me. On a clear day, I could see the hills of Inanda from the veranda of my parents’ house in Durban North.

Many of my friends were Zulus. Well, there was Esther, who came on Tuesdays, and Temba at the back of the Scout hall who sold weed for one rand a hand. Look, we can’t all be Johnny bloody Clegg, okay? 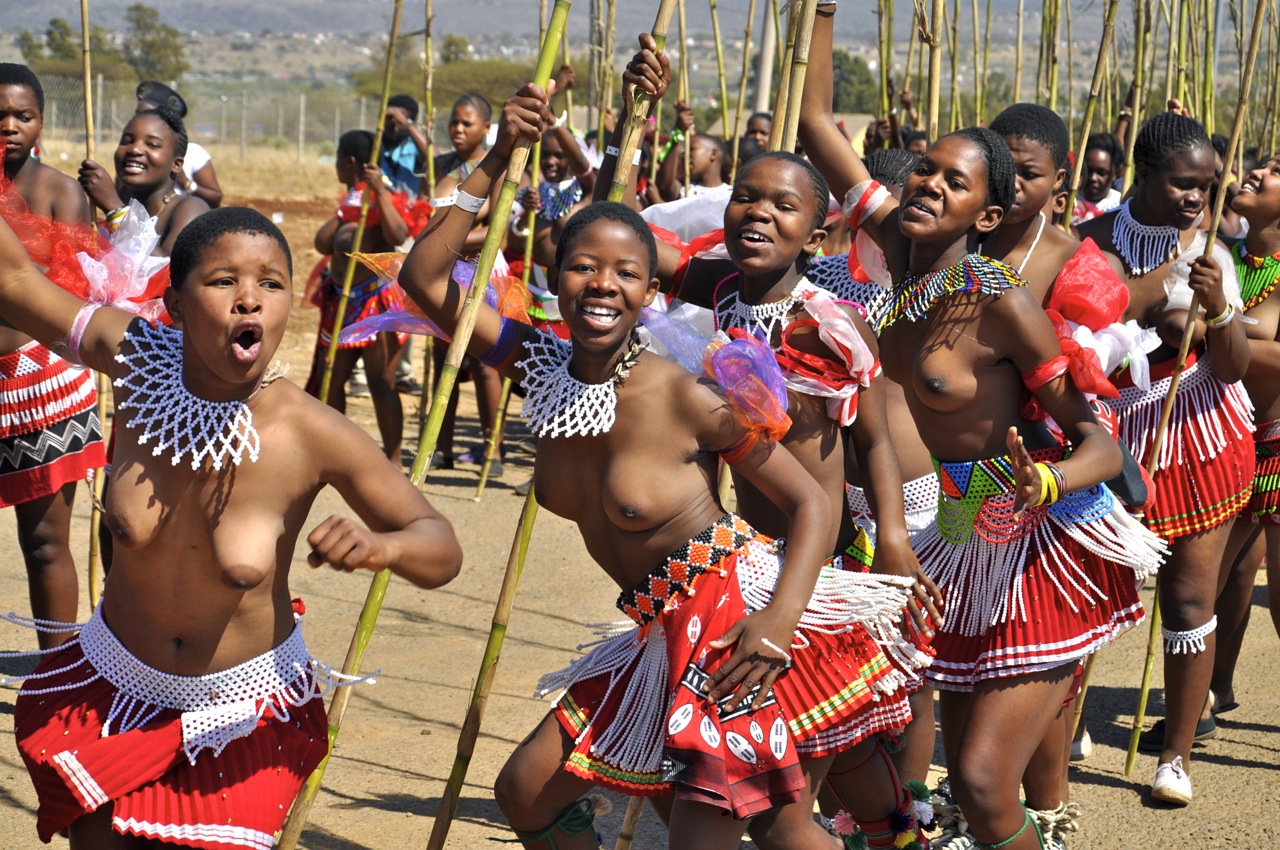 In white culture, women are reluctant to even show off their babylons unless you’ve been married to them for at least five years. And only then with the lights off and the door locked. What am I talking about? There’s no such thing as white culture. Rugby and braaing doesn’t count. 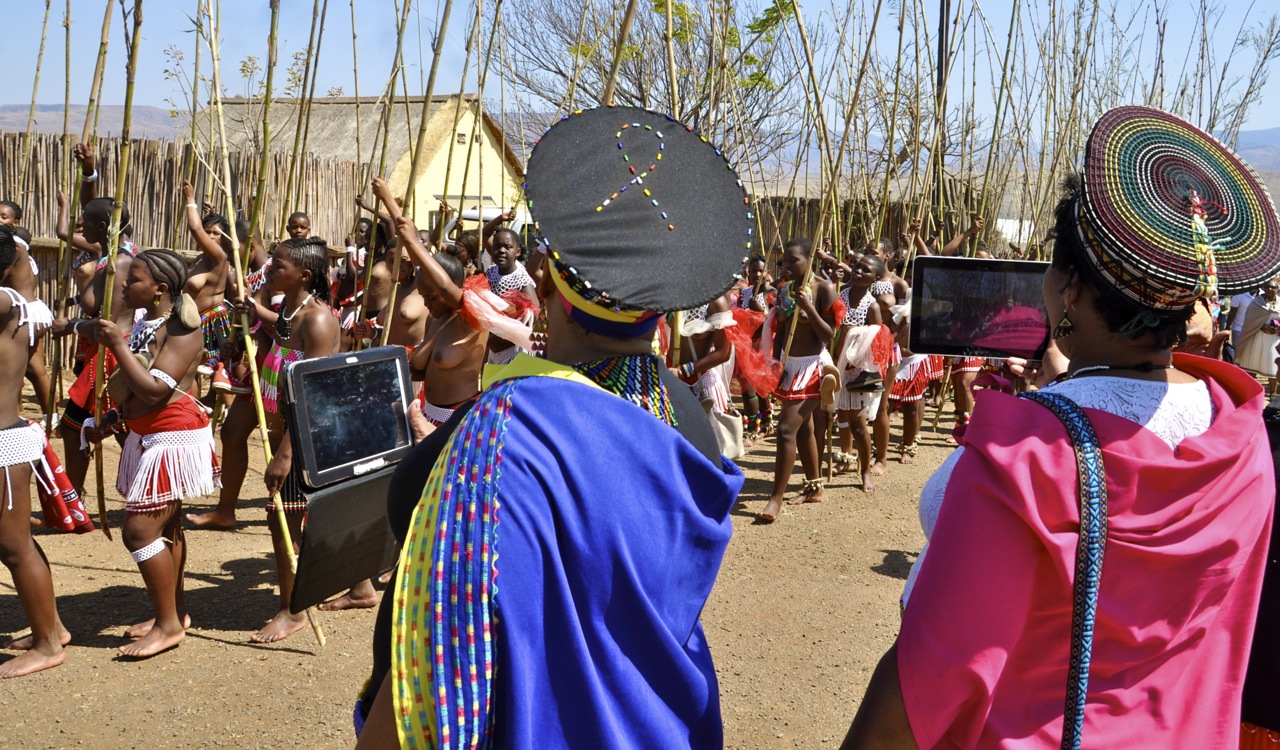 They came undulating up the road in their thousands, a swaying, singing snake surging towards the palace. I have never seen so many virgins in one place. If there had been just one, that would have been more virgins than I’d ever seen in one place. I communicated with a virgin via email once. It cost me a relationship and a trip to the Seychelles. I could only imagine what havoc thirty thousand could wreak.

These weren’t shy, demure maidens, either. Far from it. One of them broke ranks and ran at me. I went into a defensive crouch. She did some kind of weird mid-air hip thrust action and returned to the line. I wasn’t sure if it was a proposition or a death threat. Two young men disguised as leopards laughed to see such sport. 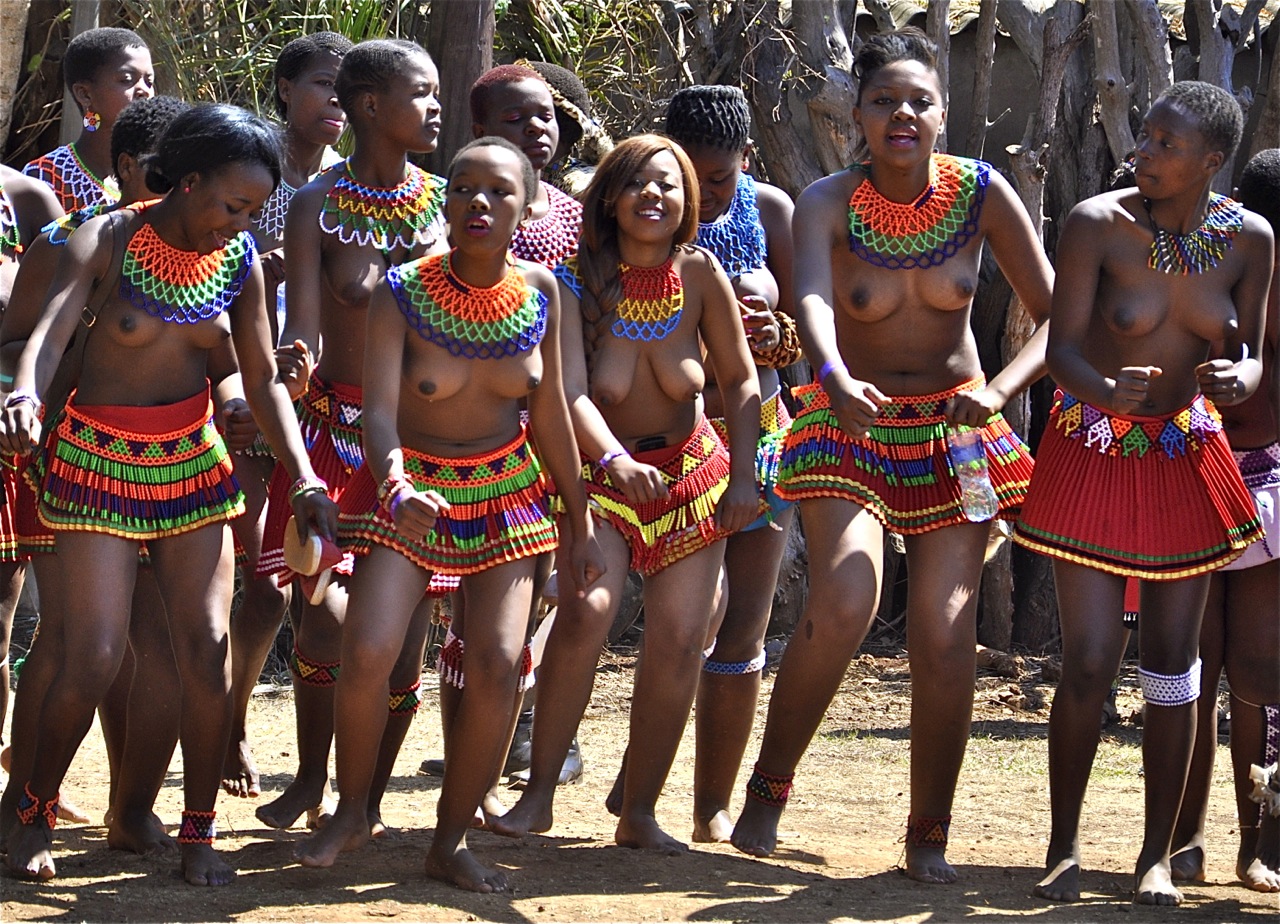 I brushed past the royal guards – this is surely one of the few palaces in the world guarded by unarmed people wearing baseball caps and blue overalls – and walked past a line of elderly men also dressed as leopards. One of them was standing beneath a gazebo wearing a black jersey. I nodded politely.

“Where’s the king?” I asked a guard. She pointed at the dude in the black jersey. Really? I was a bit disappointed that he hadn’t bothered to dress up for the maidens. I suppose that might happen when you have six wives. You let yourself go a little. I’m hardly known as a paragon of sartorial elegance, but even I know that a skirt made of leopard tails clashes horribly with a black polo-neck jumper, even if it is accessorised with a bandolier of lion’s teeth. 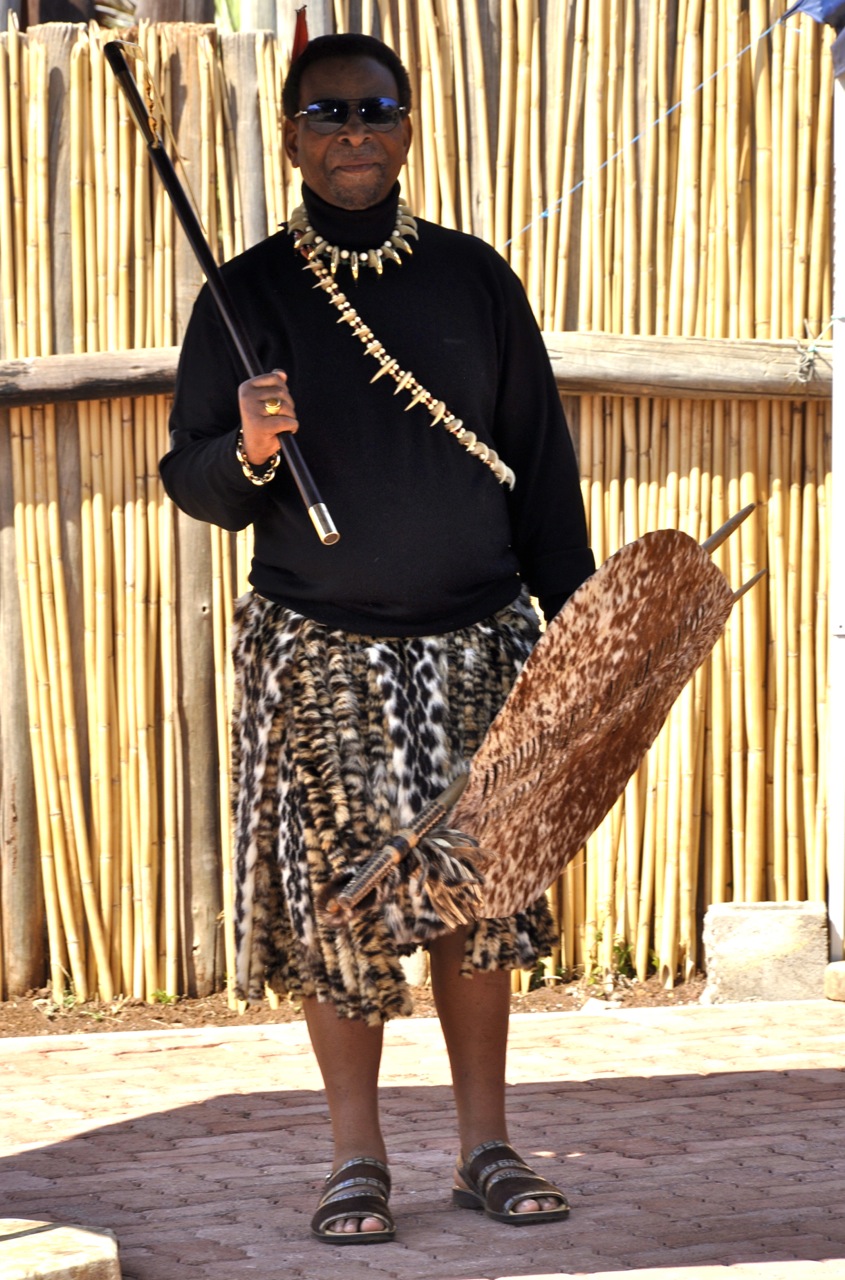 Granted, the jumper didn’t come from Pep. It was probably hand-woven from the scrotal hairs of a million Ukrainian kangaroo gerbils. But still. Shaka wouldn’t have been seen dead in a jumper.

Now and again, one of the elders or a tourist in a suit would approach the king. Walking up to him and having a chat was clearly out of the question. They had to go down on their knees and shuffle towards him. Some crouched. Nobody stood upright. This meant the king had to bend down to hear whatever it was they were saying.

“Your majesty, may I say what a magnificent jumper you are wearing today.” 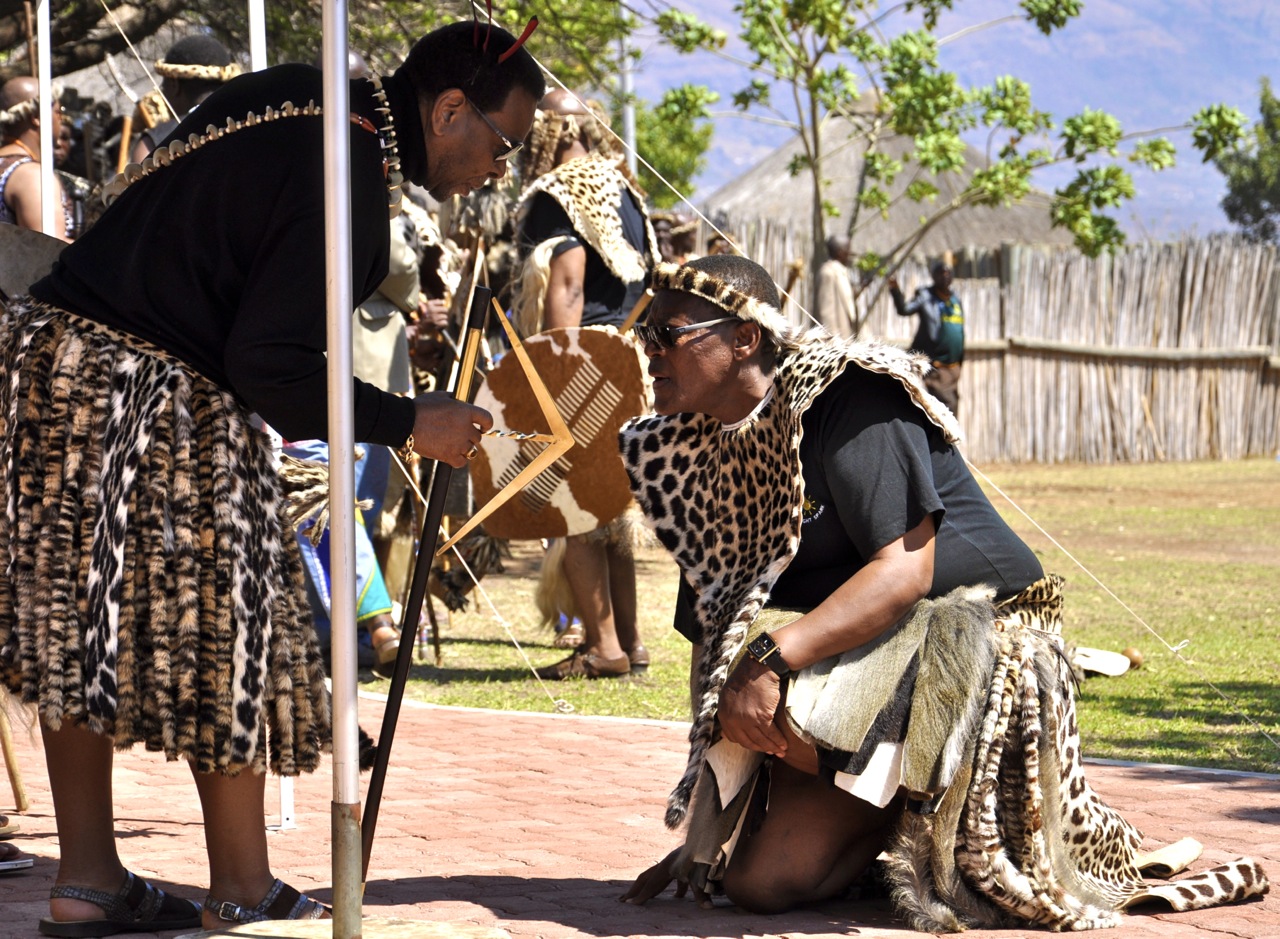 The maidens laid down their reeds, did a jig for the king, whose interest almost certainly began waning after the first 10 000 had passed by, and went back down the hill. 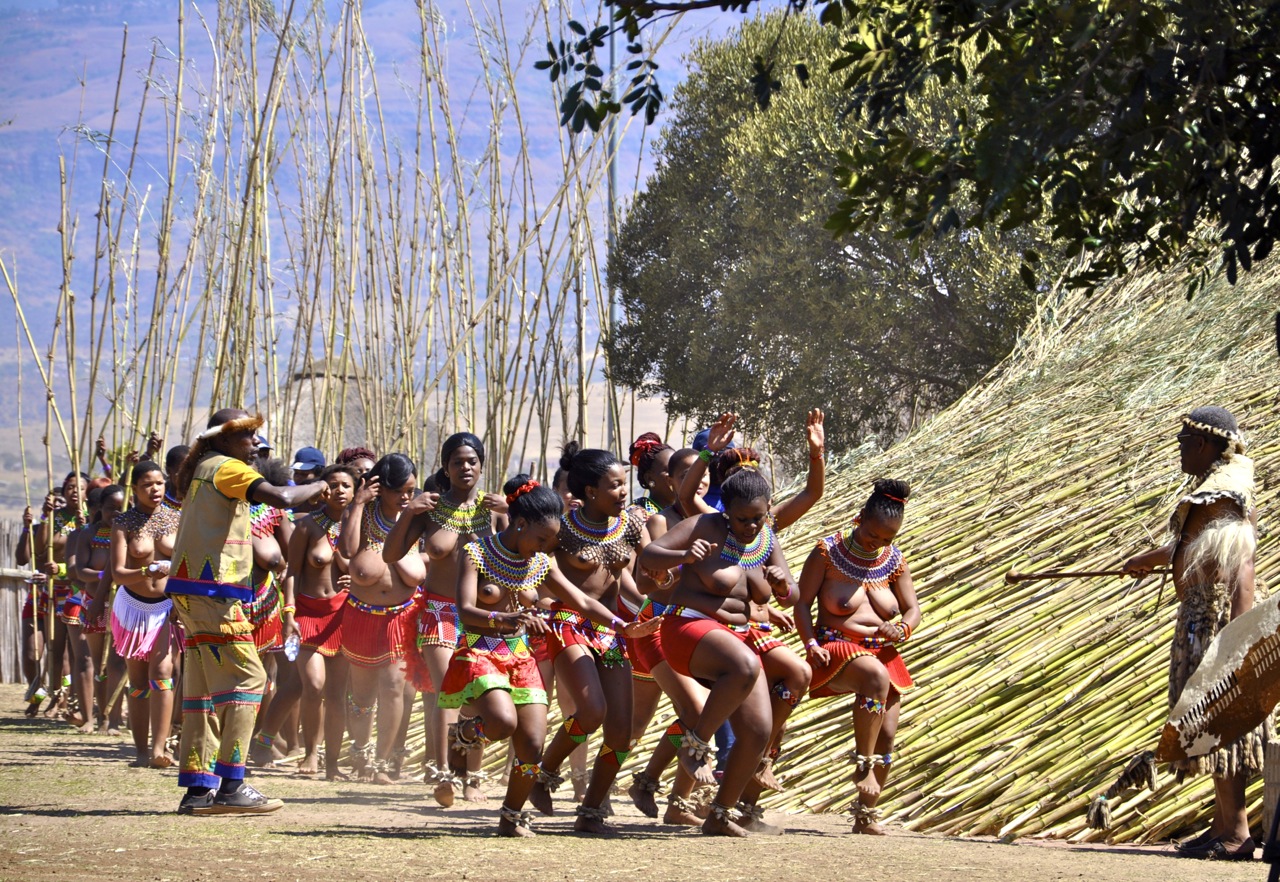 This was the 30th anniversary of the Reed Dance and the organisers once again did a magnificent recreation of what life must have been like under Dingane.

The girls stripped and washed themselves with buckets of water out in the open while, on the other side of the fence, a few metres away, young men performed the age-old tradition of sitting under trees and leering openly. This must have been part of the “respecting women, valuing their dignity and safeguarding their purity” the king was banging on about.

There are ambitious plans to build a R300-million cultural village at Enyokeni. Let’s hope it includes bathrooms. And some shade for white people. A hamburger stand would be nice, too. And a few bras. Bars.