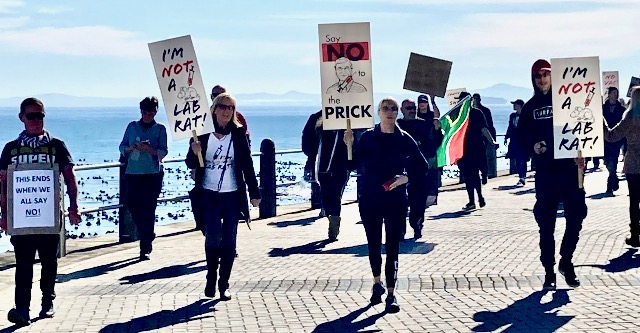 A small herd of well-heeled anti-vaxxers and middle-aged men who took too much acid when they were young flounced down the Sea Point promenade on Saturday, mewling and whining and waving their silly little placards as if a terrible injustice had been done to them.

They should have been herded into vans, taken to the Waterfront, pushed onto a boat and deposited on Robben Island. Apart from it once having been a leper colony – and what are anti-vaxxers and pandemic deniers if not social lepers – the island was also reserved for those deemed insane. Angrily refusing a potentially life-saving vaccine in the midst of a deadly pandemic has to be a sign of insanity. Even Donald Trump, who is madder than a bag of hammers, is recommending that people get vaccinated.

It’s time to stop treating the anti-vaxxers with empathy. They’re not victims. Our task is not to talk them off the ledge. They wouldn’t listen anyway. In this war of humans versus pathogens, they have chosen to side with the pathogens. C’mon, Cyril. Get mandatory on their selfish asses. You can’t give South Africans a choice. They’ll either do nothing or the wrong thing.

I’m not the only world leader who is running out of patience.

If you’re in France and want to go to a restaurant or bar or take a domestic flight, you have to show your health pass. The new law was passed on Monday. To get the pass, you must prove you’re fully vaccinated, have recently tested negative or recently recovered from the virus. Health workers must be vaccinated by September 15 or face suspension.

President Macron says the measures are needed to protect vulnerable people and avoid new lockdowns. Our lemmings are virulently opposed to both lockdowns and vaccines, seemingly unable to make the connection between the two. That’s some high-octane cognitive dissonance right there. As for protecting the vulnerable, these people don’t care about the immunocompromised. Probably because it has the word compromise in it.

France also has its anti-vaxxers. Thousands of them took to the streets on Saturday shouting “Liberty!” and saying the government shouldn’t tell them what to do. Oddly enough, I have a daughter called Liberty and she also says I shouldn’t tell her what to do.

France doesn’t pussyfoot around. This is, after all, a country that punished insurrectionists and nobility alike by chopping off their heads in public. In fact, this was their official method of execution until the death penalty was abolished in 1981. The guillotine is too good for our anti-vaxxers. They should be rounded up, locked inside shipping containers and forced to listen to Steve Hofmeyr singing Pampoen interspersed with a Bheki Cele press conference on a loop until they go mad or agree to get jabbed.

And while there were protests in Paris, this also happened – 1.7 million people rushed to sign up for a shot within 24 hours of the new law being passed. Sometimes the hesitant just need a little nudge.

Greece and Italy have also had it with the anti-vaxxers. So has Germany. While concentration camps aren’t yet on the cards, Helge Braun (no relation to Eva), chancellor Angela Merkel’s chief of staff, said: “Vaccinated people will definitely have more freedom than unvaccinated people.”

Right now we’re in a situation where the vaccinated have to wear masks to protect the anti-vaxxers. It’s a violation of the laws of nature. It’s like expecting lions to look after springboks who are too stupid to flee in the face of danger. I’d be happy for natural selection to perform its magic on those who have been duped by misinformation and conspiracy theories, but unfortunately it doesn’t work like that in this case. The more people refuse to get vaccinated, the more we’re going to keep getting locked down and deprived of our right to buy alcohol, surely one of the most important human rights enshrined in the Constitution.

The more reasonable among them say they’re worried about possible side effects. I don’t know, man. Life itself has some horrendous side effects. Paracetamol, which you take for a hangover, lists hypoxia, anaphylaxis and liver failure as potential side effects. Those birth control pills you encourage your girlfriend to take? Care for a side order of cancer, blood clots and heart attacks with that, darling?

Sure, it’s not a perfect vaccine, like those for polio, hepatitis, measles, chickenpox, rubella, smallpox and so on. The Covid muti is what’s known as a leaky vaccine. This means there’s still a small chance of you contracting the virus (probably from an anti-vaxxer), but it will be a much weaker version. It’s the equivalent of getting thrown out of the ANC. You (and the virus) have no real power to do any serious damage.

And yes, I’ve been vaccinated. I have never turned down free drugs and I’m not about to start now.

I saw this banner on CNN: “Getting shot still best protection against coronavirus.” They might want to be more specific for their viewers who are hard of thinking. The last thing we need are hordes of anti-vaxxers being admitted to hospital with bullet wounds.

Speaking as someone who only passed matric because teachers couldn’t bear the thought of having me for another year, I tend to trust people who have devoted their lives to studying things like virology, epidemiology and infectious diseases. When they say these vaccines can save your life, I am inclined to believe them.

Of course, I may be wrong. If the vaccines do end up killing us all, please accept my apologies.

80 thoughts on “Convincing anti-vaxxers to get shot”