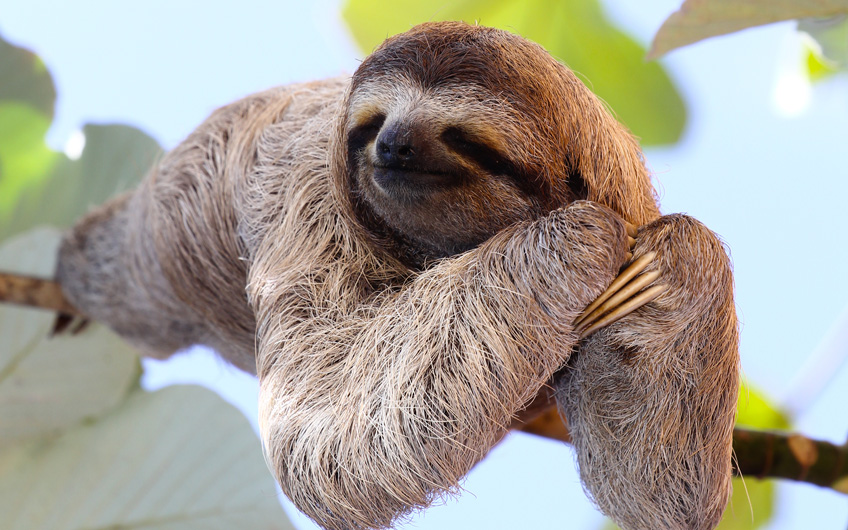 A clammy equatorial fug hit me as I sloped out of Juan Santamaria International Airport with the ink of a three-month visa still wet in my passport. Fug this, I thought. Worse than Durban in February. But there was no turning back. Loinfruit and Bloke had booked me a hotel room and promised to fetch me in the morning.

I was savagely jet-lagged and in no mood for plans to go awry, as they usually do when my family is involved. I came close to causing an undiplomatic incident when I discovered the minibar in my room was empty, but then let is slide when my brain reminded me it was still operating on SA time and that it’s probably not the best idea to start drinking at 4am. Stupid brain. It knows nothing about such matters.

The hotel was near the airport and the roar of outgoing flights had me thrashing about in sweat-soaked sheets shouting, “No, no! Not seat 38C!”

Loinfruit and Bloke arrived late. “Pura vida,” she said, pushing a cold Imperial beer into my sweaty paw. “Let’s roll, daddy-o.” The sides of her head were shaved and she had new tattoos. They were driving a modified Suzuki Samurai with tinted windows and raised shocks. It was like being on a jetski in choppy seas. I was told to stop squealing like a castrated goat every time we went around a bend. In Costa Rica, there are no roads without bends. This is serious hill country.

Bloke seemed at ease driving on the wrong side of the road and was amused by my repeated flinching. He told me to relax and claimed that countries with suicidal drivers have the fewest accidents. When pressed for his sources, he changed the subject and opened a beer. It sprayed his sunglasses and there was a long moment when nobody was driving the car.

“Jesus, take the wheel!” I shouted, assuming the brace position, which isn’t easy in the back of a Suzuki.

We wound our way down to the coast while I shouted and gestured at other drivers who were clearly out to kill us. Loinfruit and Bloke seemed oblivious. They live in Namibia, came here for a short holiday and got trapped by the lockdown. That was nine months ago.

They’ve since bought a house and show no signs of ever wanting to return home. Flexible generation, the Millennials.

I spotted a turnoff to a beach town called Jaco and suggested we check it out. Bloke said it was full of seedy bars, hookers and hustlers. Sounds fantastic, I said, bouncing up and down like a hyperactive child. Loinfruit gave me the lazy eye and Bloke kept on driving.

Their house is in the mountains. It’s probably about 3km from the coast as the pigeon flies. I mean a local pigeon, not one of our idiots that would get lost or forget where it was going or get distracted by a girl pigeon who might be up for a bit of a shag.

In a car, it takes thirty minutes to climb 900m. There are so many switchbacks that I lost track of which direction we were travelling in. Hemmed in by the jungle, we went through several climate zones and I soon began to feel like Edmund Hillary trying to summit Everest in a Suzuki.

“Hypoxia is setting in,” I whined. Loinfruit and Bloke glanced at one another. She turned around and frowned. “Do you think you might have the Rona?” I know these people. If they thought there was any risk of them catching something nasty, they wouldn’t hesitate to leave me on the side of the road.

“I’m fine,” I said. “You can’t even catch the attention of a cabin attendant on Lufthansa, let alone a disease.”

At the top of a misty hill, we took a sharp left and went bouncing down a dirt track in such appalling condition that we were all drenched in beer by the time we finally reached their house. We were deep in Tico turf. The locals are called Ticos. We’re called gringos. I’m sure there are less polite names for us. Well, for the Americans anyway.

The house looked like something Pablo Escobar might have used as one of his holiday homes while on annual leave from the Medellin Cartel. Mind you, the man who built the villa was a general in the Ukrainian army. He probably made Pablo look like a Boy Scout.

I didn’t want to ask where they got the money to buy a place like this. It’s unlikely I would get the truth. If they do turn out to be running guns or drugs, well, there are worse people to have in your family. In a best case scenario, I would have had a second kid who became a lawyer.

Christmas was fun. Bloke found a plastic Christmas tree left behind by the general. It’s probably still broadcasting to the Ministry of Defence in Kiev. Good luck deciphering those conversations, comrade. I barely understood them myself, largely because everyone was drunk by 10am. Which, I imagine, is standard operating procedure for the Ukrainian military.

Bloke gave me a razor-sharp machete as a gift, which was fantastic because I’ve always had a thing for blades. I showed them a couple of moves I’d learnt with a panga in Durban’s cane fields when I was younger. Loinfruit threatened to take it away from me after Bloke narrowly missed losing an ear.

“We thought you might be old enough to have one of these, but apparently we were mistaken,” she said, sucking on her 10th beer of the morning while swaying gently in the tropical breeze.

They warned me about the dangers of the jungle but I couldn’t wait to get out there. Fer-de-lance? Please. You speak with forked tongue, señor viper, and you shall feel the sharp edge of my weapon. Bloke told me about the Brazilian Wandering Spider whose bite can cause an erection lasting for up to four hours. Bring it on. The worst thing that could happen is that I’d have to join Tinder.

Apparently it also causes cramps, hypothermia, vertigo, blurred vision, intense sweating and convulsions, all of which are normal side effects of sex anyway, if you’re doing it properly.

I watched Cyril’s family monologue last week and it’s clear I got out just in time. Here, I can go to the beach and buy beer in the local supermarket whenever I want. The sea is 28ºC and there are no power cuts. The towns and villages are clean and the government takes good care of its citizens. There is no army and protected national parks everywhere. There are sloths and toucans and nobody wants to break into your house and iron your face just for the hell of it.

If anyone can think of any good reasons why I should come back, do let me know.

5 thoughts on “Getting high in Central America”