The Trump campaign has pledged to nominate a hunter to lead the U.S. Fish and Wildlife Service, aggressively fight lawsuits by anti-hunting groups and control predators like wolves.

Guess who is top of the list. That’s right. None other than Donald Junior. Here’s a letter I wrote to Trump’s delightful boys not too long ago.

Just wanted to congratulate you on your successful hunting trip to Zimbabwe. Our papers have been full of pictures of you guys holding up dead leopards in a pink mist of vapourised waterbuck. You’re real heroes in these parts, let me tell you. There has been a bit of criticism, but it’s coming mainly from white bunny-hugging do-gooders who think wild animals are there to be photographed instead of destroyed like the vermin they are.

I see you managed to bag three of the Big Five. Well done! But what stopped you from going for a full house? You got the buffalo, elephant and leopard, but missed the rhino and lion. And you call yourselves Trumps? Just kidding. I’m sure it’s not your fault. I bet the organisers of the hunt failed to tether them securely and they escaped before you could drive up and shoot them in the face.

Donald Junior, I particularly enjoyed the picture of you holding an elephant’s tail in one hand and a knife in the other. You can even see the legs of the elephant lying on the ground to prove that you got it off the animal and not from a curio shop. I bet you also cut off its trunk and poked it through your zipper and pretended you had a giant willy. I certainly would have.

I liked the shot of you guys posing next to a crocodile strung up from a tree. It reminded me of those old pictures from your Deep South. Now that the darkies are off-limits, croc-lynching could be the next big thing in Alabama. Wanna be partners? You gun ’em down, I string ’em up.

By the way, did you know that we also have a Small Five that are tremendous fun to kill? Meerkats are my best. If you’re quick, you can run up and kick them before they bolt for cover. Your brother, Eric, could have waited in an imaginary end zone to catch the flying ‘kat. Touchdown! American football, Africa style. What’s not to love?

Another of my favourites is the tortoise. Hunting tortoises is usually done when you have a hangover. I’m sure you had lots of those on your trip because the only way to survive in Africa is to drink heavily while firing blindly into the night.

So what you do is set up your chair within shouting distance of a reliable servant – you don’t want to run out of Bloody Marys – and wait for a tortoise to come along. Put your foot on his back to stop him from getting away. This is where it gets tricky. He will have retracted himself, making a clean head shot impossible. Don’t shoot him in the shell if you plan on using him as a paper-weight. They shatter easily. Rather take a leaf out of your father’s book. Cut off his lights and water and starve him out.

You said the local villagers were overjoyed at getting the meat from your hunt. And why wouldn’t they be? Leopard carpaccio garnished with a sprinkling of civet cat and drizzled with crocodile jus doesn’t appear on the menu in the Matetsi area all that often.

When I read that the hunt organisers were called Hunting Legends, I thought they were offering legends like President Robert Mugabe. Now there’s a trophy you should have on your wall. But I suppose he would put up too much of a fight. Not that you lads aren’t bok for a fight. Far from it. A kudu is a hell of an adversary. You were just fortunate to come across one that was drugged. To be honest, a lot of the game in southern Africa is on drugs these days. They also lack any real work ethic and spend most of the day sleeping. Smelly freeloaders. No wonder we kill them.

You were also lucky to have survived shooting a tusker. Many elephants, particularly in Zimbabwe, are known to explode without warning and, even from a distance of 300 metres, you could easily have lost a leg. Or worse, had your hair messed up. Gel is hard to come by in the bush.

I’m not much of a hunter myself, but I think I know why you boys enjoy it. For a start, Eric is a girl’s name and he has a lot to prove. And your name is Donald Junior, and yet it is Eric who looks more like your father. No wonder you’re angry.

My wife says you’re both latent homosexuals. But as my Uncle Pervy used to say, “Better latent than never.” Anyway, you’ll be happy to know that I beat her soundly for her insolence.

I must say, though, Eric, you do look pretty damn sexy with that leopard draped over your shoulders. It brings out your eyes. And Donald Junior, seeing you straddling that dead buffalo makes doggie style seem positively Christian.

Y’all come back again, ya hear! 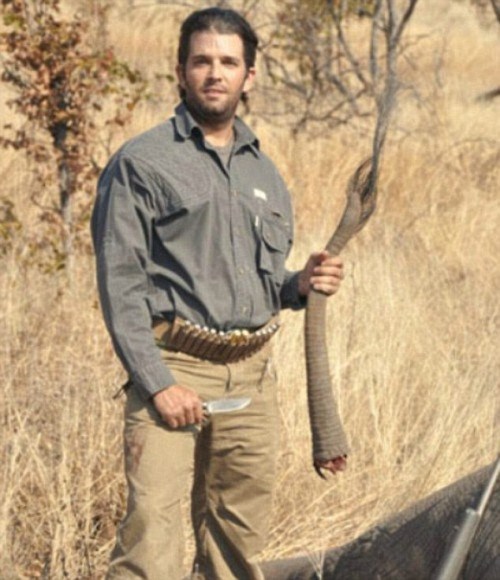 23 thoughts on “Getting the fox to guard the hen house”