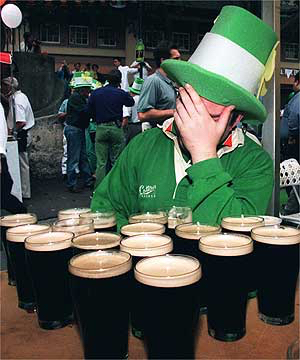 Why is it that the Irish have all the fun? To be sure, there was that nasty business with the potatoes in 1845, but if it weren’t for the Great Hunger, Boston and New York wouldn’t be the same today.

St Patrick’s Day is full of fun traditions. The colour green plays a big part. After a day of eating green food and drinking green beer, many people go to bed with their faces suffused in many interesting shades of green. This happened to me after one particularly robust St Paddy’s Day with friends in Durban. My girlfriend at the time said it wouldn’t have happened if I had listened to her and had my stomach pumped. But where’s the fun in that?

On St Patrick’s Day, the Irish bring out the shamrock – the three-leafed clover that is said to attract good luck. On our public holidays, South Africans bring out the five-leafed cannabis that usually attracts the police and not such good luck.

The Irish kiss the Blarney Stone; South Africans get stoned, talk blarney and kiss anything that isn’t nailed to the floor.

In Dublin, the St. Patrick’s Day parade is part of a five-day festival attended by half a million people. We don’t have parades, we have protest marches. And although the attendance is nowhere near Irish levels, ours can go on for a lot longer than five days (depending on whether the festivities spill over into arbitration).

On St Patrick’s Day – or any other day – Ireland’s bars are full of happy people. The Irish are possibly the most self-deprecating nation on earth and they have no qualms about telling jokes about themselves. Like this one.

“O’Connell was staggering home with a pint of booze in his back pocket when he slipped and fell heavily. Struggling to his feet, he felt something wet running down his leg.
“Please,” he implored, “let it be blood!”

When South Africans have a few drinks and tell jokes, they usually end up having to explain themselves to the Human Rights Commission.

Ireland has Leprechauns. They are small, not particularly friendly and spend their time making shoes. We have Tokoloshes. They are extremely aggressive, have holes in their heads and resemble a cross between a zombie and a gremlin.

Ireland has St Patrick. We had Nelson Mandela. Both were arrested and incarcerated. Legend has it that St Patrick drove all the snakes out of Ireland. Mandela drove all the racists out of South Africa. Well, maybe not all.

It was on St. Patrick’s Day that Ireland’s cricket team eliminated Pakistan from the 2007 World Cup. South Africa, on the other hand, lost to Bangladesh and then went on to score a magnificent 27 for five against Australia.

Want to be lucky today?