The cry came late at night in a dog-eared bar in a feral village called Amed. I went limp and dropped to the ground, which was easier done than said, and pretended to be dead. This was, after all, Indonesia – a country inhabited by hundreds of ethnic groups, volcanoes, elephants, tigers and Komodo dragons that can kill with one lick of their monstrous tongues. We might have been under attack by any one of them. Maybe not the the volcanoes.

From my position of pusillanimity, I could hear people shouting and the sound of bottles breaking, but nothing to suggest that heavily armed militants were taking hostages. The music switched from Marley’s Mr Brown to Tosh’s Bush Doctor. If I was going to die, it may as well be with a song on my lips. “So legalise marijuana …” I warbled softly. It seemed a good enough hymn to die to in a reggae bar on the raw east coast of Bali.

A foot with painted toenails nudged me in the face. “Get up,” said my daughter’s voice. “Your arak is waiting for you.” Arak, it turned out, is a traditional spirit made from palm trees. It sounds harmless but get a bad batch and it’ll kill you quicker than a falling coconut. The lucky ones go mad or blind. Having arak is almost as hazardous as having daughters.

What the hell kind of child foists arak on her father? The best kind. It wasn’t the first time in my life I’d been grateful to her. She and I and her handsome Congolese boyfriend and a couple of their friends who’d been in Bali long enough to know how to defend themselves in the event of an arak attack clinked glasses and shouted incomprehensible rubbish at one another. Someone – it might have been me – ordered two jugs of the filth. It wasn’t long before three men with tattoos and clearly defined biceps asked if they could join our table.

“Sure,” I shouted. “But you Australian bastards had better not want to start any of your fighting.” The darker-skinned one said quietly, “We’re not Aussies, mate.” I recognised the accent. “You Scottish people are even worse than the Aussies.”

It was like that moment in Saving Private Ryan when a bomb goes off and everything moves in slow motion and Tom Hanks can’t hear anything.

“We’re from New Zealand,” said the Maori. His heavy-duty buddy said something about beating South Africa. I know they’re our mortal enemies in rugby, or maybe it’s cricket, but I don’t know which country is top of the log. Or even if there is a log.

To avoid having to talk about sport, I bought them a jug of arak. Things went sharply downhill after that. A word of advice. If you’re going to appoint a wing-man, choose someone other than a Maori. Everyone loves a Maori. Not only the girls, either. Even James Small couldn’t keep his hands off Jonah Lomu back in ’95. And it’s obvious that Bismarck du Plessis has a bit of a crush on Keven Mealamu.

On the dance floor, my wing-man’s moves were a seamless fusion between the haka and the kama sutra. Mine were a cross between a malfunctioning windmill and Stephen Hawking out of his chair. I did get chatting to a beautiful young woman at the bar. When she told me she was Dutch, I said she owed me and my country an apology. Probably not the best pick-up line. Not long after, I lost a shoe.

At breakfast the next morning, a waiter asked me how the fishing had gone. I drooled gently into my mie goreng. “You catch any red snapper?” He laughed like an escaped lunatic and went back to the kitchen. I turned to my daughter for help. “He was at the bar last night. He’s asking if you scored. You know? With a woman?” Shamefaced, I looked down at my one shoeless foot. It had no answers.

The young people wanted to go off and do the things young people do, which are pretty much the same things I wanted to do. “Take me with you,” I pleaded. “I can be useful.” They laughed and two hours later threw me and my surfboard out of the car in Balian, a surfing, yoga and crystal meth sanctuary on the west coast. “Good luck with the snappers,” shouted Captain Congo.

An afternoon ride on my pathetically underpowered rented scooter up the coast to Medewi seemed like a good idea. I’d already had a cracking surf in the morning and was in the mood to eat prey and love. Medewi was 30kms away. It took me over an hour to get there. The road is the main vein between Bali and Java. I was hoping to take in some of the local colour but all I saw was my life flashing before my eyes. It wasn’t pretty.

I hit a roadblock 5kms outside Medewi. Cops on both sides. I tried to hide in the cloud of carbon monoxide spewing from a truck packed with live chickens but as I drew level, one of them blew his whistle and pointed at me. One of the cops, not the chickens. A family of five, all blind from arak and riding a bike made of compressed pangolins, almost hit the cop. He smiled and waved them on.

A young Indo guy in civilian clothes sauntered up. He smiled, shook my hand and asked for the bike’s papers. Eventually I found them taped beneath the seat, where one would keep coded messages when one becomes a courier for the revolution. He asked for my international driver’s licence, which had stupidly left itself back in Balian. “Half a million rupiah fine,” he said, with a cheerful Indonesian grin. I went pale and clutched my testicles. “If you go to court,” he added. Ah. The option. There is always an option in humid countries. Let’s make it a hundred thousand and never mention it again. I fumbled for my wallet. He averted his eyes and backed away. “Pay the policeman,” he said. The cop was dressed like a war hero and didn’t seem open to haggling. I slipped him two fifty thousand rupiah notes and he melted away. There was no eye contact from either side. The civilian reappeared and asked where I was going, then smiled shyly and gave me directions to Medewi.

“In that case, comrade,” I said, “I’d rather just turn around and go back to Balian.” Apparently this wasn’t an option. He insisted that I continue to Medewi and return in two hours, by which time the police would have packed up and gone home, presumably to thank the god of tourism for his beneficence on this bountiful day.

Medewi has an ugly boulder-strewn beach patrolled by surly non-Hindu locals gouging the tourists. Faced with that road from hell, I guzzled a few beers at a warung with no soul. Two hours later, I was back on the bike. The roadblock had gone but the traffic was worse. Not worse as in jammed. There are no traffic jams in Bali. In this swollen river of cars, bikes, trucks and buses, you keep moving or you die. Back in Balian, I stopped at a building site and used a crowbar to unclench my sphincter.

In the morning I walked along a riverbank to the beach, paddled half a kilometre out into a warm sea, caught the waves of my life and watched the sun come up behind a forest of coconut palms. Perhaps I shall stay. 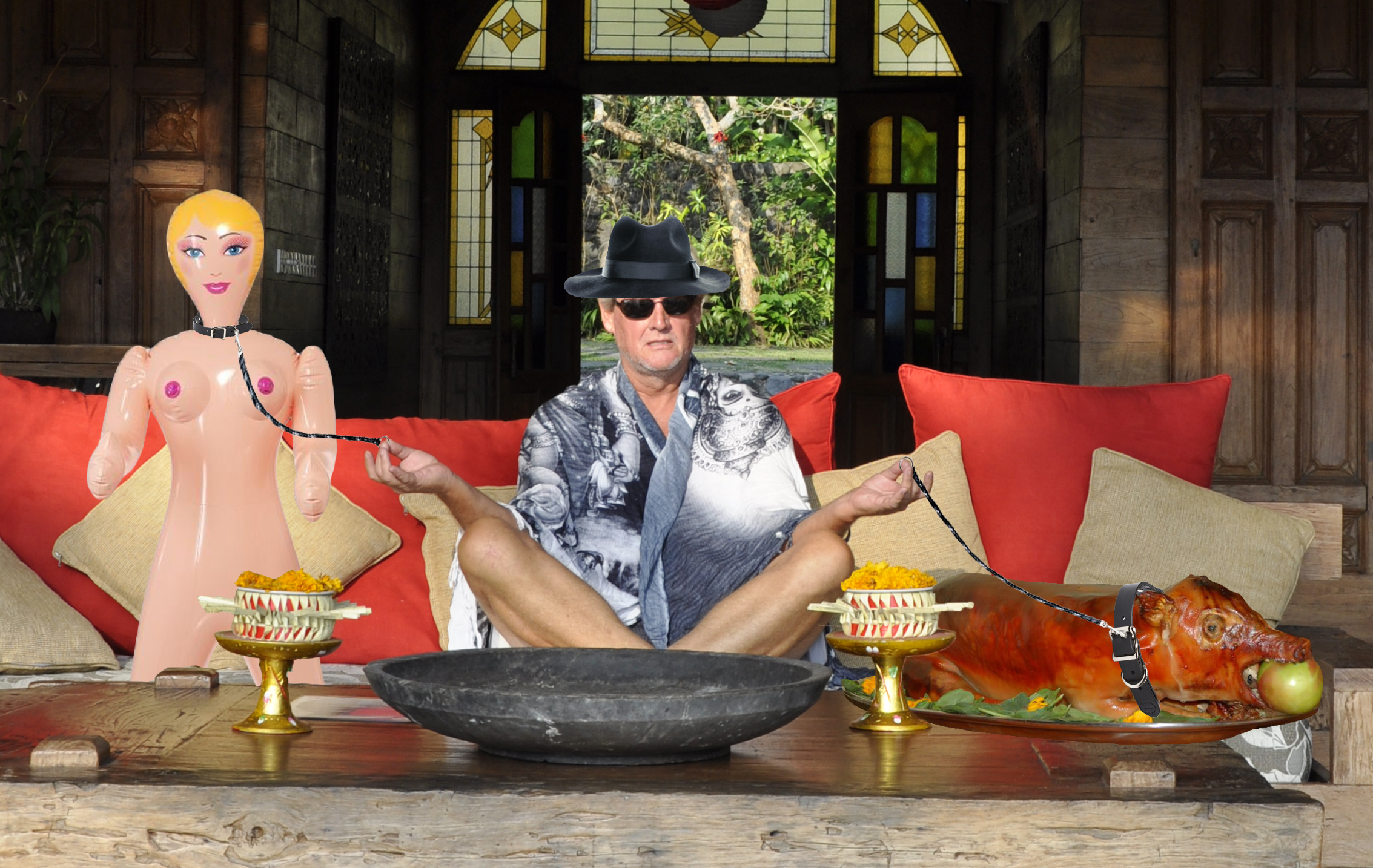