An open letter to Brian Boswell

I have been meaning to write to you for years to thank you for helping make my childhood such a happy one. Back then, of course, you were known as Boswell Wilkie Circus. Now you are simply Brian Boswell’s Circus. Did you feed Wilkie to the lions? I hope so. Never liked the man. Never met him, of course, but in this country that’s no reason not to hate someone.

I have fond memories of going to the circus in Durban with my family. Dad would buy a ticket and then, once inside, he’d use his diving knife to cut a hole in the canvas at the back of the stands. The rest of us would wriggle through and go straight to the front. In those days nobody argued with a white man. Especially not if he was carrying a six-pack of Black Label and a nine-inch serrated blade capable of cutting a shark’s head off. Those were the days, my friend.

How I loved to watch the elephants jumping through flaming hoops. Maybe they were flaming elephants jumping through hoops. My memory isn’t what it used to be. The clowns were my best, especially the black ones who would run into the arena and pretend to be shot by other clowns dressed as policemen. Maybe they weren’t pretending. Either way, it got a big laugh from the crowd. I also clearly remember an act involving a pony and two women dressed in very tight … no, wait. That was something I saw on the internet last week.

If it wasn’t for you, I would have had to go to a game reserve if I wanted to see animals. Animals, needless to say, that dozed under trees or loitered gormlessly around waterholes doing no tricks at all. If you were in charge of the Kruger Park or Hluhluwe-Imfolozi, things would be very different. I, for one, would be far more inclined to go on game drives if the springboks put on a display of synchronised pronking, the hippos played water polo with the crocodiles and the wildebeest were trained to trot in circles with jackals on their backs and maybe ground squirrels on the jackals. Field mice doing cartwheels on top of the ground squirrels would be awesome.

I would also like to thank you for unleashing the hit squad when those six tigers “escaped” recently from your Natal Zoological Garden and Lion Park. Tigers make terrible pets and even worse circus animals. They simply refuse to do tricks and will bite your child in half without provocation. Did you know they have Indian blood in them?

You claim that someone removed the locks from their cages – someone who wanted to steal them. Sure, we have some of the dumbest burglars on the planet, but how dof do you have to be to try to steal six tigers? This isn’t an episode of The Hangover. Perhaps they were animal rights activists, but I doubt it because even our tree-hugging, lentil-eating perverts know this is a country where shots are fired first and questions asked later.

I have a theory. One of your trained chimps, or maybe even a marsupial of sorts, fashioned a crude duplicate key and sprung the cats late on a moonless night. He or she was obviously on someone or something’s payroll. Beyond that, I am reluctant to speculate.

By the way, congratulations on keeping this under wraps for at least a month. A lot of people might think there is something wrong in gunning down six escaped tigers and that would be bad for business. Obviously there was a leak. Perhaps one of the people involved in the operation was a double agent for the Tamil Tigers or Tiger Brands or even Tiger Woods. There’s a whole network out there.

The report I read said, “The first five were destroyed on the night of December 7 after being found milling around staff quarters.” That’s the problem with tigers. They’re either clawing your face off or milling about. Bastards.

Three days later, the sixth tiger was shot dead “in thick bush” on a neighbouring farm. He deserved to die because he was pretending to be a wild tiger who just wanted to be left alone. At least the others had the decency to make an obvious point of wanting to eat the staff.

As you made it clear to the prying, tiger-loving media, “It would not have been safe to dart them.” Of course it wouldn’t have been. What if a dart had missed and hit a policeman who was about to stop an armed robbery? He would have fallen asleep and the baddies would have escaped. This doesn’t explain why so many cops in our charge offices appear to be tranquillised.

Another report quoted you as saying, “I am not a canned hunter, nor am I in the business of tiger bones.” There is no indication that the reporter had asked if you were. I’m sure you’re familiar with the expression, “The lady doth protest too much.” I don’t know what it means but it’s the only one I know.

So the tigers were being prepared for export to a zoo in the “ Far East”. These days, the Far East is three blocks down, take a right and second left. Hopefully you mean further east than that. You also said the zoo wanted a dozen but you didn’t have that many.

“The dealers gathered six of them to go,” you said. You talk like a tiger lord. Or the manager of a Chinese takeaway. I like that. You don’t mince your words. Tigers are also nice, minced. That’s what I’ve heard, anyway.

Apparently Ezemvelo KZN Wildlife is investigating the massacre. What extraordinary luck. Their investigation should be wrapped up within a decade or so, and the outcome will be that all of your tigers, dead or alive, should first be offered to the king of the Zulus before being shipped off to China.

Finally, best of luck with your breeding programme. I hear you already have a liger – a cross between a lion and a tiger. Looking forward to seeing your giruffalo and zebrocerous. 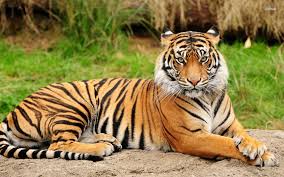 12 thoughts on “Not my circus, not my tigers”