It might just be because I’m freshly unemployed and the algorithms are sensing my fear, but I have started noticing more and more Facebook ads from people who have a burning, selfless desire to make us all fabulously wealthy.

They plan on doing this by holding free seminars. That’s right. Free. These people are so generous that they want nothing in return. All they ask is to be given the opportunity to explain to us how to turn our miserable lives around and become massively successful in no time at all. It’s astounding. I had no idea there were such good people in the world today.

Over five days this month, 22 seminars titled ‘Think and Grow Rich’ will be held in Durban, Pretoria, Johannesburg and Polokwane. Obviously I’ve been doing the wrong kind of thinking. Or more likely, given the state of my bank account, not thinking at all.

Their banner promises “A lifetime of riches in property.” Ah, that explains why Cape Town’s not on their list. Thanks to a shameless feeding frenzy sparked by predatory foreign buyers and fuelled by rapacious estate agents, everyone in the last staging post for white people has already made millions through property.

According to their website, the seminars are “inspired by Napoleon Hill’s original teachings”. Napoleon won’t be making an appearance at the Lombardy Boutique Hotel in Pretoria East or anywhere else for that matter because he be long dead. Napoleon’s life is littered with failed business ventures. In fact, he only ever made money from writing books on how to make money. Also, he heard ‘spirit voices’ which he said helped him write the books. 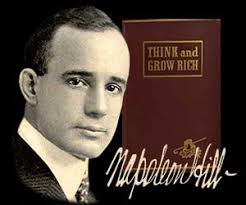 The website implores us to “Imagine a lifetime of financial freedom!” You see, they shouldn’t do that. A lot of people use their imaginations to make a living. These are the ones who never have money. If you tell them to imagine being so rich that they’d never have to work again, there’s a very good chance you’d find us, I mean them, weeks later sitting in a forest laughing and talking to the trees.

Those blessed without imaginations will race ahead. They will be assured that Napoleon “has helped transform millions of lives, turning budding entrepreneurs around the world into focused business achievers”. Here’s a fun fact. More than 90% of people who decide to become an entrepreneur would struggle to spell the word correctly. I don’t know if that is a fact. It’s just something I heard. In my head. Right now. Damn voices always telling me rubbish that has nothing to do with making money.

Sylvia from Ga-Rankuwa seems to be their poster girl. Thanks to the tools she received from Think and Grow Rich (not tools like automatic weapons and plastic explosives) she went from “negative yielding properties to being a specialist in buying distressed properties from auctions and distressed sellers, refurbishing them and flipping to raise capital”. Not knowing what this means makes me feel pretty fucking distressed, too.

I won’t say anything more about Sylvia because her surname is Milosevic and the last thing I need is some tough guy from Pretoria getting Serbian on my ass.

But, hey. They promise that in just two hours your life will never be the same again. It’s not impossible. My life certainly changed in the two hours it took to conclude both my marriages. I have since managed to wrestle it back under control. Sort of.

What if you live under an upturned boat at the harbour and you’re too poor to invest in a mutton bunny chow, let alone property? No problem. You should still attend the seminar because “part of what you’ll learn is how to creatively acquire and raise finance towards your property investment”. They don’t suggest ways to get past seminar security if you’re bleeding from an open head wound and smell like a rotten snoek. To be fair, people do creatively acquire finance all the time in this country. Mostly through cash-n-transit heists, but each to his own.

You are encouraged to bring guests to the seminar because “building a personal fortune is more fun and rewarding when you have a friend or family member to share the experience”. The experience, sure. But the profits? There will be blood. I can guarantee it.

Another question people frequently ask is, Will I have to buy anything? This is, after all, a free seminar and you don’t want to come all the way down here, bribe the pigs at the roadblock, hassle for parking, pay a car guard, maybe get mugged, find you can’t smoke or buy a drink, sit on a cheap plastic chair wedged between people reeking of desperation and still have to buy something at the end of it.

Of course not. “You are not required to purchase anything,” says the website in a soothing voice. However. “We do offer additional educational products and services at our workshops.”

They also offer people a free gift for attending the seminar. Quite likely the same kind of free gift that guarantees you safe passage out of a timeshare presentation.

Then there’s another one coming up in Durban and Cape Town. The Secret to Business and Financial Success! The secret, as far as I can make out, is to use the word Secret. You mean there’s a secret to making money? I’m a sucker for that kind of thing. All journalists are. Mention that something is secret and we’d kill to find out what it is and then tell as many people as possible about it.

This seminar is an interminable four hours and might explain why presenter Anne Wilson is pictured clutching her temples. Co-presenter Brian Walsh is seen in a more relaxed pose. Maybe a bit too relaxed. They both look a bit mad, to be honest.

In their short blurb, they use the word ‘secret’ thirteen times. There’s a reason Frodo Baggins didn’t tell everyone who passed by that he was on a mission to destroy the One Ring at the Crack of Doom in Mordor before Sauron could get his filthy hands on it. That’s because it was a secret. If you tell too many people that you know something they don’t, they’re going to start thinking there’s something wrong with you mentally and in all likelihood will stop inviting you to their parties.

Brian name-drops Richard Branson, Elon Musk and Jeff Bezos. He ponders if they became successful because they know “the secret”. Brian can confirm that, after thirteen years of research at The REAL Entrepreneur Institute, there is indeed such a secret. Judging by the number of people who attend their seminars, there can’t be that many who know the secret. Perhaps it really is only Richard, Elon, Jeff and Brian.

Brian is “super excited” that a “very special lady” will join him to share the second secret. Yeah, there’s a second secret. It doesn’t get better than this. The second secret “involves our habits and management of money”. I can’t remember what the first secret was. I’m not that kind of journalist.

The very special lady is Ann Wilson. She looks thirty years younger in her second picture. That must be one of the benefits of financial success. Brian and Ann are “super excited” to share their life-changing secrets with us.

Perhaps anticipating an existential crisis, there is a section that introduces “People who have seen Ann and Brian together”.

Marlene Visser thanks them for an amazing seminar filled with laughter, information and food for thought. Being a free seminar, I imagine that’s the only food you’ll get. Christopher Ndohlo said, “Each presenter did way more than i expected and thank you for the invite it was a moment i dont intend forgetting,.” I don’t know, Chris. I expect there’s more chance of success if you work on your grammar and punctuation.

Anyway. Fuck it. We’re all hustling to stay alive. Some preachers get their flock to swallow snakes and petrol. It’s up to you what you want to swallow. But I just can’t work out why Brian and Ann and Napoleon’s people do this kind of thing for free. Come to think of it, I can’t even work out why I’m doing this for free. Until recently, this would have appeared in the next Sunday Tribune.

7 thoughts on “There’s gold in them thar seminars”