For a long time, I have been looking for a unique shantytown accommodation experience because I don’t believe you can call yourself an African until you have spent at least one night in a shack.

So you can imagine how excited I was when I found your website offering just that!

Although photographs often lie, it seems that your shanties are very authentic indeed. Did you hire someone from Mangaung township to build them? I hope not.

You say yours is the only shantytown in the world equipped with under-floor heating. Are you sure? I have heard that the favelas in Rio have heated floors as well as Jacuzzis. Anyway, I expect the worst thing about living in a shack is that your feet get cold when you walk from the bedroom, through the lounge, across the conversation pit, down the hall and into the kitchen to get a beer. If municipalities installed heated floors in all the townships, nobody would ever want to go out and protest. That’s the end of the revolution right there.

Offering free wifi in your shacks is also a nice touch. There should be internet access in shacks everywhere. Why should all those stolen computers go to waste?

You say you offer “long-drop effect toilets”. What exactly does this mean? I am certainly not paying R850 a night to squat over a hole in the floor. Perhaps you mean the sound effects are piped into a normal toilet. Screaming, crying, that sort of thing.

And you have donkey geysers as well? Sounds interesting, although I would never have thought that donkeys burned well enough to heat a geyser. Do you soak them in petrol first?

Exactly how much of an authentic experience will this be? Will there, for instance, be mock raids by the police? I think it would be rather exciting to have my door kicked in at 3am and have two burly black constables pull me out of bed, throw me against the corrugated iron wall and give me a damn good frisking. I don’t mind being stripped naked.

I presume there will be the usual quota of goats, chickens and snotty-nosed brats running about in the dirt. It just wouldn’t be the same without them.

And I expect there won’t be any regulations governing the behaviour of guests. If I am to stay in one of your shanties, I reserve the right to play my radio as loudly as I wish for as long as I wish. I will in all likelihood get eye-bubblingly drunk at various times of the day and night. At some point, I may very well attack the Venters. I expect the lodge will provide a fake ambulance with fake paramedics to arrive once the mayhem has woken the other guests, who, in the spirit of authenticity, should attack the “paramedics” and raid their “ambulance” for drugs. I would suggest you equip the “ambulance” with genuine drugs as a means of livening up the experience. Pethidine aways gets people going nicely at parties.

Your name is Emoya Luxury Hotel & Spa. Very smart. I don’t know what Emoya means, but it sounds African enough. Wouldn’t it be funny if it turned out that Emoya meant, “Beware of cheap imitations” in an obscure north Sotho dialect?

If you want to be truly authentic, turn your Spa into a Spar. You should also avoid telling people that each shanty sleeps four. Leave it open. If a family of twenty wants to stay there, let them.

And by the way, I am not staring at a filthy old tin wall all night. I want my shack equipped with a flatscreen TV. Don’t worry. I won’t ask where it came from.

I think all white people should spend a night at your Makhukhu Village to get an idea of how the other seven-eighths live. Perhaps they could even write it off against tax. Pretending to be one of the impoverished masses for a weekend must surely come with some kind of compensation.

I have just noticed that you also have a “shebeen bar” with a real township atmosphere. This is excellent news. You say, “Come and enjoy a court of beer while listening to quirky music or take on your buddies at the dart board or pool table.” I hope you mean, like, a tennis court of beer and not a magistrate’s court. And when you say quirky music, do you mean quirky like Worsie Visser or quirky like Miley Cyrus? Maybe she’s more twerky than quirky, if you know what I mean.

When you say, “Take on your buddies …” I expect you mean that fighting over the pool table is allowed. Do you provide weapons or must guests bring their own? I have a panga.

And you say it’s an ideal venue to bring your wife, girlfriend or “skelmpie”. Great stuff. If I were having an affair, the first place I would take my skelmpie would be to an artificial squatter camp on the outskirts of Bloemfontein.

The waiting list must go on forever so put my name down at once. 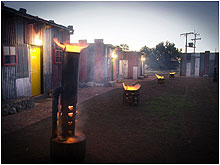