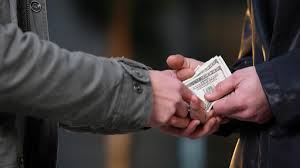 Last weekend I bribed my first policeman. Yes, I know. It’s shocking to think that I have lived in this country my whole life and only now has this happened.

I have friends in Joburg who bribe cops two or three times a month. I’m talking about ordinary, law-abiding people. Criminals obviously bribe the police a lot more frequently. It’s an occupational hazard and is probably tax deductible.

I was returning home from a dinner party – which, I might add, is a reprehensible business on its own. What depraved monster conflated the two? Dinners and parties are very different animals. They must be held separately, in separate parts of the house, if not the city. Eating is nothing but the sating of a savage, primal urge. It’s as messy and brutal as sex and shouldn’t be done in front of others. One needs to make a beast of oneself. Get feral. Use all your fingers and your whole face. I’m talking about eating, here, although this applies equally to sex.

Once your belly is full (after dinner – if it’s full after sex, you’re doing it wrong, although there are some people, mainly Germans, who would disagree), you may proceed in a disorderly fashion to the party. Which is what I did.

With my 12th book having recently been published, I am now too important to drive myself around. I have someone to do it for me. It’s not a formal arrangement in the sense that she has agreed to it, or, for that matter, even knows about it. It’s on a more ad hoc basis. Or, in the case of nights out, ad hic.

On the night in question, I decided that I should take the wheel. The decision was made at 153km/h. My driver seemed to think it was less likely that the evening would end in a twisted heap of burning wreckage if she remained behind the wheel. I showed my disagreement by tugging at the wheel and pulling on the handbrake. Actions really do speak louder than words.

She pulled over in an ungainly fashion, phrases ill-befitting a lady pouring from her mouth, and we switched seats.

“Let’s see how you like it,” she said, sawing at the wheel. I laughed, cuffed her playfully across the head and brought the car back under control. It was hard to ignore the flashing blue light in my rearview mirror.

I checked the back seat for any stray contraband. It was clean, apart from 15 cans and 21 dumpies of Tafel lager. They’d been there for a while. It’s not as if I drive around like that on the off-chance that I feel like a beer. I just hadn’t got around to taking them out of the car and putting them in the fridge.

I pulled over and got out, partly to get away from the angry passenger and partly to intercept the cop before he reached the mobile bottle store. He was Saps, not Metro. He asked for my driver’s licence. My wallet was in for repairs, but my licence was in my pocket. I pulled it out, along with a wad of banknotes and my credit card. His pupils dilated as they adjusted to the sight of money.

“Have you been drinking?” he asked. What a ridiculous question. Everyone on the road after 11pm has been drinking. Everyone. Without exception. It was 2am. What did he think I’d been doing – researching the nocturnal mating habits of the Western Leopard Toad?

I said I’d had a couple of beers, but doubted that I was over the limit. There was a very good chance I was telling the truth. I’m 1.94m and weigh 102kgs. The amount of alcohol it takes to make me feel even a little tipsy would kill a smaller man.

He went back to his van and I considered making a run for it. It’s been a while since I ran anywhere. My heart probably couldn’t stand it. I would have to take a slow amble back to my car. It wouldn’t work. When he got back he told me that he had radioed for the traffic police to join us. Great. Sounds like the makings of a party. I even have beer!

“A spot fine, maybe?” I brought out the crumpled banknotes. He glanced at my hand and shook his head.

“It’s better we go to the autobank,” he said.

My first rotten cop. There we were beneath the trees in the early hours of the morning, gently corrupting one another. It was almost romantic.

He walked over to my car and got into the driver’s seat. I was confused.

“Should I follow in your van?” It seemed to make sense that if he was taking my car, I’d take his. He laughed and said I should get in the back. The passenger, relieved that somebody other than me was driving, chatted amiably to the constable.

A couple of kilometres down the road, he pulled in to a garage. I got out and withdrew a thousand bucks. We returned to his van and I slipped the cash into his paw. He pointed to the back seat of my car. I opened the door and hauled out a six-pack. Anything else take your fancy, officer? How are you doing for shoes? I tell you what. I’ll throw in the woman if you promise to leave me alone.

He took the money and the beer back to his van and I drove home.

Now. Condemn me if you will, but bear in mind that this cop was bent long before our paths crossed. And it’s no good using the street kid argument. Not giving them money doesn’t mean they’ll go away. Which brings me to the ‘sliding doors’ scenario.

While we’re waiting for the traffic police to arrive, I decide not to offer a bribe because it’s illegal. Besides, I don’t feel at all drunk. I get breathalysed. The result is positive. I’m the equivalent of two beers over the limit.

I get pushed into the back of the van and taken to a police station where I am booked and thrown into a filthy cell. There are seven other men in there. Their eyes are red and full of nothing. Within half an hour, I have been wrestled to the ground and had my boots stolen. At 3am I am woken by two men holding me down while a third rips my pants off. My screams for help are ignored as a man with a spiderweb tattooed on his neck does unspeakable things to my bottom.

I’ll pay the bribe, thanks.