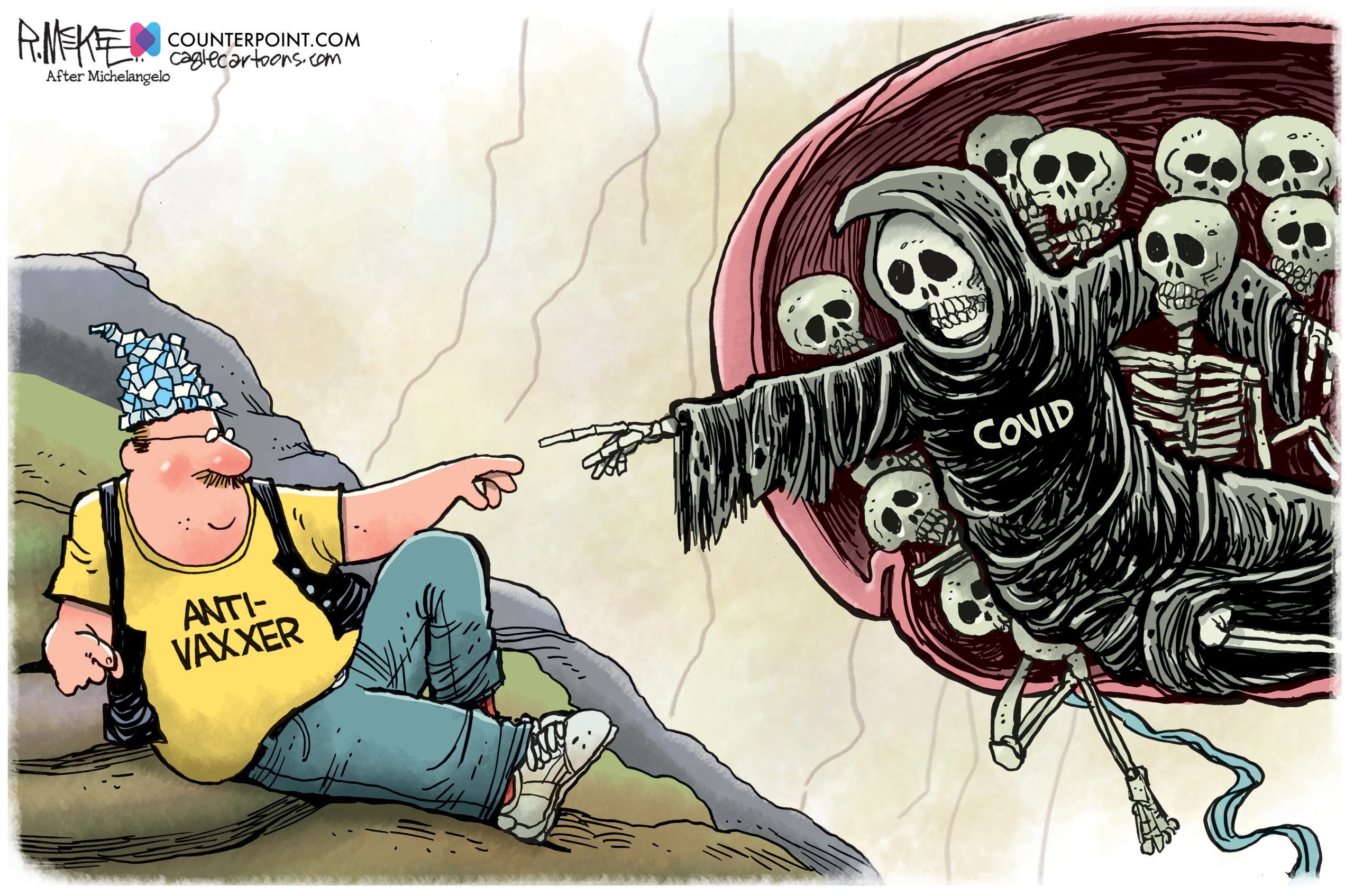 One of the more positive spinoffs of the uncivil war between the vaccinated and the anti-vaxxers is that we as a species are being divided. If ever wedges needed to be driven, it’s between friends and families. For too long we have felt beholden to get along. We have been indoctrinated into believing that even toxic blood ties are sacred and that having moronic friends is better than no friends at all.

These fallacies are now coming apart. We are witnessing a battle between modern science and benighted beliefs, spurred on by increasingly fractious levels of intolerance and arrogance reflected in equal measure by those with feet in either camp. And it’s only just getting started.

Even though we might be united in our aversion to, say, racists or vegans, we have begun hurling the identical epithets and arguments deployed by both sides. “You’re a sheep! Don’t be so blind! Do the research!” The sheep slur is, admittedly, tossed out mostly by the anti-vaxxers, even though many of them swear by Ivermectin, a drug literally used on farmyard animals.

People who have been friends forever are ignoring calls and looking at one another through narrowed eyes. “I never thought you’d be one of Them,” they say. Heads are shaken and invitations declined on the grounds that masks will/won’t be worn. And if you are mad enough to go out with your mates, you tell yourself before you leave home that you’re not going to get riled up. You’re not going to mention Covid. You’re going to talk about other things. You’re going to remain calm. The booze and chatter flow easily for the first hour. Then someone, and there is always one, says, “So who’s been vaccinated?” You quickly try to turn the conversation to Afghanistan, but it’s too late. Not even the prospect of some good old Islamophobia or America-bashing can avert disaster. The fall of Kabul is a picnic compared to the rest of your evening.

Loyalties are roughly shouldered aside in the stampede for the moral and intellectual high ground and the risk of violence escalates quickly. If you’re having people over, best to collect the knives and hide the heavy objects.

My own sister was among the hesitants. Even though she’d already got Covid and passed it on to our octogenarian father, she still wasn’t sold on the idea of getting vaccinated. People have died from it, she said. I countered this by comparing her paltry figure with the massive number of unvaccinated who have died. However, information like this is easily dismissed with the erudite response, “Kak, man.”

I eventually talked her into getting jabbed and convinced her to drag the old man along, which was pretty damn noble of me considering that I was doing myself out of a possible early inheritance.

The disconnect between believers and sceptics is nothing new, as evidenced by these early conversations:

Copernicus: Hey guys, did you know the earth is spinning?

Dobry: That’s the wine, you fool.

Copernicus: And we revolve around the sun.

Janek: Liar! We can see the sun moving across the sky.

Lukasz: Put his eyes out!

Alexander Fleming: Fellas, I’ve discovered something that can cure your syphilis.

Angus: Let me guess. You found it in one of them mouldy old dishes in your flat?

Hamish: No, thanks. I’m not a guinea pig.

Benjamin Franklin: Dudes, I discovered last night that lightning is an electrical discharge.

Roger: Electricity is the devil’s work.

Peter: Nothing wrong with candles.

Donald: My father says lightning is God’s way of showing he’s angry with us.

Alexander Graham Bell: Chaps, I’ve come up with a way of talking to folk in other towns.

Charles: That’s impossible. Are you high?

Andrew: Who do you really work for? Stone him!

Roberta from Salem: It’s true, your honour, I’ve not been feeling myself lately.

Prosecutor: You are possessed by Satan!

Roberta: Er, no. I think I might be epileptic.

Herophilus of Chalcedon: I must dissect a human cadaver to learn more about…

Antivaximus: Not allowed, mate. You can cut up a rat, though.

Herophilus: But there are things in the human body that we…

Scepticemia: Heretic! There’s nothing to see in there.

Appolonius: Cut his tongue out!