“More than 120 pregnant whales were slaughtered in the latest Japanese whale hunt in Antarctica’s Southern Ocean, reigniting calls for Australia to step up efforts to stop the annual killing spree. A further 114 immature whales were killed as part of Japan’s so-called “scientific” whaling program. Japan’s summer hunt stretches into Australian whale sanctuaries.” – News reports.
Here’s a column I wrote eight years ago.
JAPAN, Norway and Iceland have killed more than 30 000 great whales since 1986. And if you think that’s good news, wait until you hear this.
A new deal being negotiated behind closed doors could see a lot more whale meat on our plates come dinner time. To be honest, I haven’t sunk my teeth into a decent southern right steak since I was a child. As a special treat my mother would buy us whale meat. I remember it clearly. It came in a yellow box with a caricature of a blue whale on the front. The whale was spouting and grinning. It might even have been winking. It was the happiest whale I had ever seen. It was the only whale I had ever seen.
At some point I discovered that this tasty cetacean snack was meant as pet food. Thanks, mom.
I had no idea where the whale in my sarmies came from. I tried asking my mother the other day but she recently adopted a position of denying everything and it was hard enough getting her to acknowledge that she had a son at all. I never thought to enquire about the origins of my lunch at the time. I was just happy to have something to eat, even if it was cat food.
Then, one day, whale was no longer served in my house. I can’t remember what replaced it. Tortoise, probably. It was the end of an era. I lost 180kgs and girls stopped asking to see my blowhole.
The whaling station on the Bluff shut down in 1975 – 70 years after Jacob Egeland, the Norwegian consul in Durban, and his sidekick Johan Bryde, formed the South African Whaling Company. If you think the beachfront smells bad today, you don’t want to know what it was like when the Scandinavians were up to their elbows in sperm whale.
In their first year they harpooned 106 of the brutes. Always eager to please, a pod of whales got together off Umhlanga and voted to name themselves after Bryde, who they had grown particularly fond of as a result of his remarkably good aim. A clean head shot, every time. Whales appreciate this sort of attention to detail.
Meanwhile, a group of jersey-wearing jellyfish on the International Whaling Commission is at this very moment conniving with powerful interests who are just as comfortable with flensing knives as they are with numbered bank accounts.
For the first time since 1986, commercial whaling is poised to make a comeback and every budding Cap’n Ahab out there is dusting off his old harpoon and getting ready to sail for the Southern Ocean.
The carnage should be spectacular.
Speaking of large mammals, did you know that 50% of South African girls aged 15 to 19 are overweight and 30% obese? Boys waddle in at 29 and nine percent respectively.
Parents need to get their kids onto some kind of programme. I can recommend a good weight-loss tape. It’s called duct tape. You stick it over their big fat mouths.
28 March 2010

And here’s a letter I wrote to the Japanese ambassador seventeen years ago.
Dear Ambassador,
I see that one of your government officials has described Minke whales as the “cockroaches of the sea”. I could not agree more. Dirty great things cluttering up the ocean. They ought to be ashamed of themselves. Unlike land-based cockroaches, they at least don’t fly at your head when you least expect it. Getting struck in the face by an airborne Minke could ruin a good day’s fishing.
The Minke are vermin. Scum of the seas. They are forever lying there half-submerged waiting for unsuspecting yachts to come along. Many a sailor has cursed the smirking Minke while watching his boat sink. They are also far too big. Any fish that weights fifteen tons is a freak of nature. They upset the feng shui of the ocean and deserve to die.
I cannot understand why the members of the International Whaling Commission refuse to lift the ban on commercial hunting. We don’t even need them. They scoff all the shrimp and wallow about idly belching from their blowholes. And the whales are no better.
It was pure genius on the part of your government to tell the world that you are only catching Minke whales for “scientific research”. There is, after all, so much to learn from a dead whale. Made any exciting new discoveries lately.
By research, you presumably mean men in white coats inspect the meat as it is chopped into 1kg blocks and sold to fish and chip shops around Japan. Given the fact that 2500 tons of blubber are consumed in your country every year, I find it remarkable that there are so few fat Japanese. Do you feed it all to your sumo wrestlers?
As you know, whale season here in the Western Cape is around the corner. In fact, a few Southern Rights have already been spotted in False Bay. An old hand-held harpoon has been in my family for generations and I’ve been thinking of giving it a whirl. If I manage to bag a medium-sized aquatic cockroach, I can have it transported to the embassy in no time at all. What do you say to a thousand rand a ton? Translate that into yen and you’ve got a damn fine deal.
In the meantime, here’s R10 in “development aid”. Use it wisely.
Let’s stamp out the whales!
Yours truly,
Ben Trovato

A few days later, the First Secretary of the Embassy replied.
He basically said they’d love to chat about the subject but that “it would be somewhat difficult to do so if one’s opinion is based on inaccurate information”. I assumed he was talking about me. This was followed by a pack of lies about their “scientific research”.
And my R10 was returned. “We are, unfortunately, not in a a position to accept the attached donation as the Government of Japan does not allow any of its bodies to accept any form of donation as worthy as it may be.” 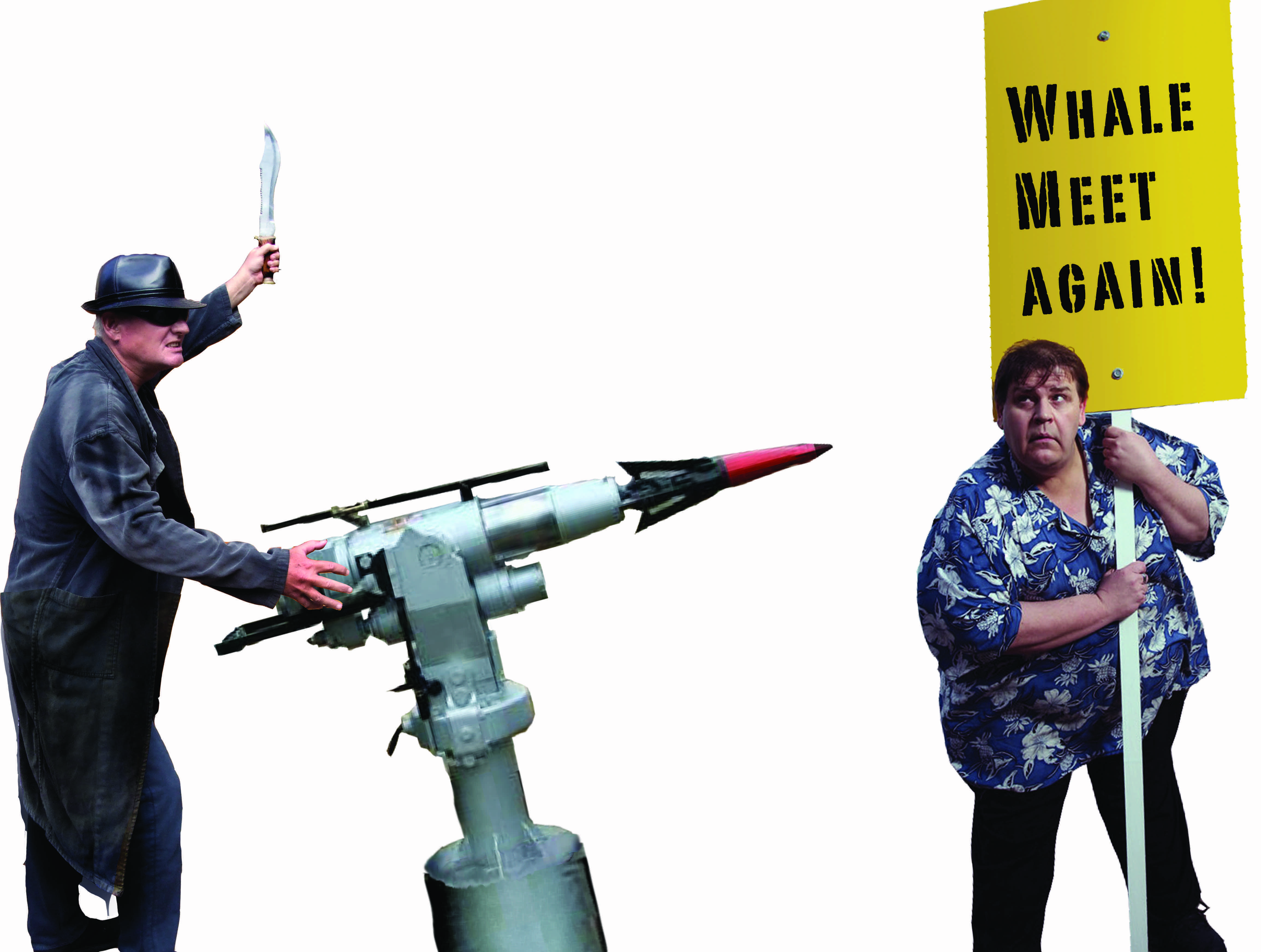