I bought a container of cherries this week because it’s been a while since I had a cherry. In more ways than one.

Cherries are the heroin of the fruit world and they were down my gullet in ninety seconds flat. I needed more, rather badly, and considered going from door to door slaughtering anyone unable or unwilling to feed the monkey on my back.

Luckily for them I was distracted by the price sticker – R45.99 for 15 cherries. No, I didn’t know the price when I bought them. That’s not how I shop. If I like the look of something I put it in my trolley and when I get to the checkout I avoid looking at the cash register.

It’s only when I get home that I am exposed to the retailer’s profane lust for profits. There was another sticker. “Imported from UK.” I almost had a stroke. We grow cherries in South Africa. I know this because I once went to the Cherry Festival in Ficksburg and was nearly killed. Not by the cherries. It’s a long story involving military policemen, a box of matches and a sleeping bag soaked in aviation fuel. Tequila might have been involved.

There are 500 hectares of cherry trees in the eastern Free State, with 250 trees per hectare with an average yield per hectare of ten tons. That’s, like, a trillion cherries.

Don’t tell me we’re importing because it’s not our cherry season. We grow marijuana all year round and there’s no reason we can’t do the same with cherries.

I can’t afford to live like this. As a freelancer I never get an increase. This means that, at some point down the line, the cost of living will be tailgating my earnings and a trip to the shops will get me two potatoes and a mouse from the pet shop. If the price of mice goes up, I’ll just have to forego the protein. There’s no point in complaining. Might as well laugh. Drink and laugh.

I remember a time when shopping for groceries was fun. We’d roam the aisles surreptitiously scoffing biscuits and guzzling wine from screw-top bottles before posing as security guards and frisking the elderly. Sometimes we’d pretend to shag inside the show tent in the outdoor section. Well, she was pretending.

That was when we were a we. Now I is just an I. A lot of things aren’t as much fun when you find yourselves on unexpected early release after a long stretch in the Connubial Correctional Facility. Sex is one. Shopping is another. Unlike sex, though, women generally take the initiative when it comes to groceries. They have to or the contents of the trolley would resemble the handiwork of a juvenile delinquent with foetal alcohol syndrome.

Shopping is a drug and men are the pushers. Women are the users. Draw your own conclusions. I have pushed more trolleys than I care to mention. It’s only right that the man retains control. In the wrong hands, a trolley is a lethal weapon.

What often happens, though, is that the female will take command of the trolley in mid-shop. This is done in silence. It is conducted like a prisoner swap between two hostile countries. The male does not know why the trolley has been taken from him. He says nothing, but follows at a respectful distance. Now and again he removes an item from a shelf and discreetly puts it in the trolley. Less discreetly, she takes it out and returns it to the shelf. Later, the trolley is found abandoned, allowing the male to once again assume control. Assume being the operative word.

I have somehow become a subsistence shopper, buying just enough for one day. Perhaps this is what happens when one lives alone for too long. One begins to see no point in planning too far ahead because at any moment one could go mad or drive to the airport or simply walk into the ocean and never come out.

There are times I reach the till with two items in the trolley. This sends a message to other shoppers that here is a man with ascetic tastes. A strong, heterosexual man with no need of luxuries. A Spartan warrior, if you will. Or a loser with no lover and very little money. But that’s not it at all. Every time I go into a supermarket, I have every intention of stocking up. I am, however, almost immediately overwhelmed by the decisions I am expected to make. A great heaviness takes hold of my brain and I have to fight the urge to lie down.

My cupboards are full of rotting food and it’s maggots versus weevils in a ghastly battle for total domination of this repulsive kingdom. The inside of my fridge looks like a science experiment gone terribly wrong. It’s not my fault. Everything comes in bulk. Of course it’s going to go off.

Why are there are no little portions for single people? I want to buy two eggs and three rashers of bacon. I want one pork sausage, not twelve. I don’t want a whole loaf of bread – I want four slices. I also want a shot glass of applesauce for my sausage because I can no longer bear to throw out one more virtually full jar of applesauce that has mutated into an ecosystem of evil.

A third of all food produced in South Africa – worth R60-billion a year – goes to waste. Let’s not tell the thirteen million people who go to bed hungry every night. They wouldn’t be happy. Then again, they’re probably too weak to protest.

Anyway. Back in the supermarket, I find myself in a staring match with the Salad Bar. It doesn’t have what I want. Why use the word bar if your customers can’t order a Bloody Mary? It’s false advertising and the premises should be torched. I counted eighteen bowls of unlabeled noodle-based substances. They should give you a goddamn user’s manual.

Being Durban, people tend to congregate in the dead animal section after they’ve been sweating in the aisles. It’s not so bad now, in winter. But in summer management uses cattle prods to encourage people to disperse to the non-refrigerated areas.

Chilling with the dismembered livestock, I saw something called Box Flavoured Flatties. They looked like donor organs. I shan’t be buying one any time soon, even if they do taste like the yummiest of boxes.

I thought I’d seen every cut and form of frozen chicken, but I hadn’t yet seen Rainbow’s “Walky Talky Heads and Feet”. To describe it as a grotesque horror show in a bag wouldn’t come close to doing it justice.

I needed to be around some kind of product that hadn’t been forced to live a cruel life and die a violent death. Pasta, then. I don’t really understand pasta, but I’d like to. What I don’t need is 72 different shapes and strains to choose from. Some, like Penne Rigate, even have surnames. Capelli D’Angelo looks like Donald Trump’s hair and Conchigliette could easily be a rank in the Mafia.

If I stay too long in the supermarket, catatonia sets in and people have to push their way past me because I’m standing slack-jawed and drooling at, say, the olive section because I’m faced with black or green or Calamata, pitted, sliced, tinned or buffet, stuffed with garlic, anchovies or wildebeest spleens.

Why stuff them with anything at all? Is it not enough of an indictment on humanity that someone thought to stuff a duck into a turkey and then a chicken into the duck and call it turducken? How about a sautéed sparrow for starters? Would madam like a flambéed flamingo for dessert? Oh, go on. I’m sure you could squeeze another bird into your grotesquely distended belly.

Fraught with indecision, I made the rookie mistake of wandering into the cereal section. There are 947 different types, ranging from the kind that will turn your poo into ceramic bricks to the kind that will make you run in circles for an hour before vomiting up a technicolour rainbow.

Having pushed an empty trolley around for twenty minutes, I panicked and began grabbing stuff off the shelves. When I paid, the teller gave me a couple of Stikeez. Apparently these things are the equivalent of crack-cocaine for children. Not wanting to get addicted, I gave them to a passing mother. She gasped and her face lit up. I got the feeling that if she didn’t already have a child, she’d be happy for me to give her one right there and then. She passed my Stikeez to her brat in the trolley and I thought he was going to have an embolism.

The mother followed me into the parking lot thanking me over and over again and even touching me. I began to get an idea of how Jesus might have felt, although if he had been handing out Stikeez instead of loaves and fishes, he would have had a lot more than twelve disciples, let me tell you.

What I might do is collect these miniature voodoo trinkets and hang around outside shopping centres, offering them to hot unmarried mothers in return for … well, in return for their groceries. I never again want to set foot in one of these hideous monuments to greed and waste. 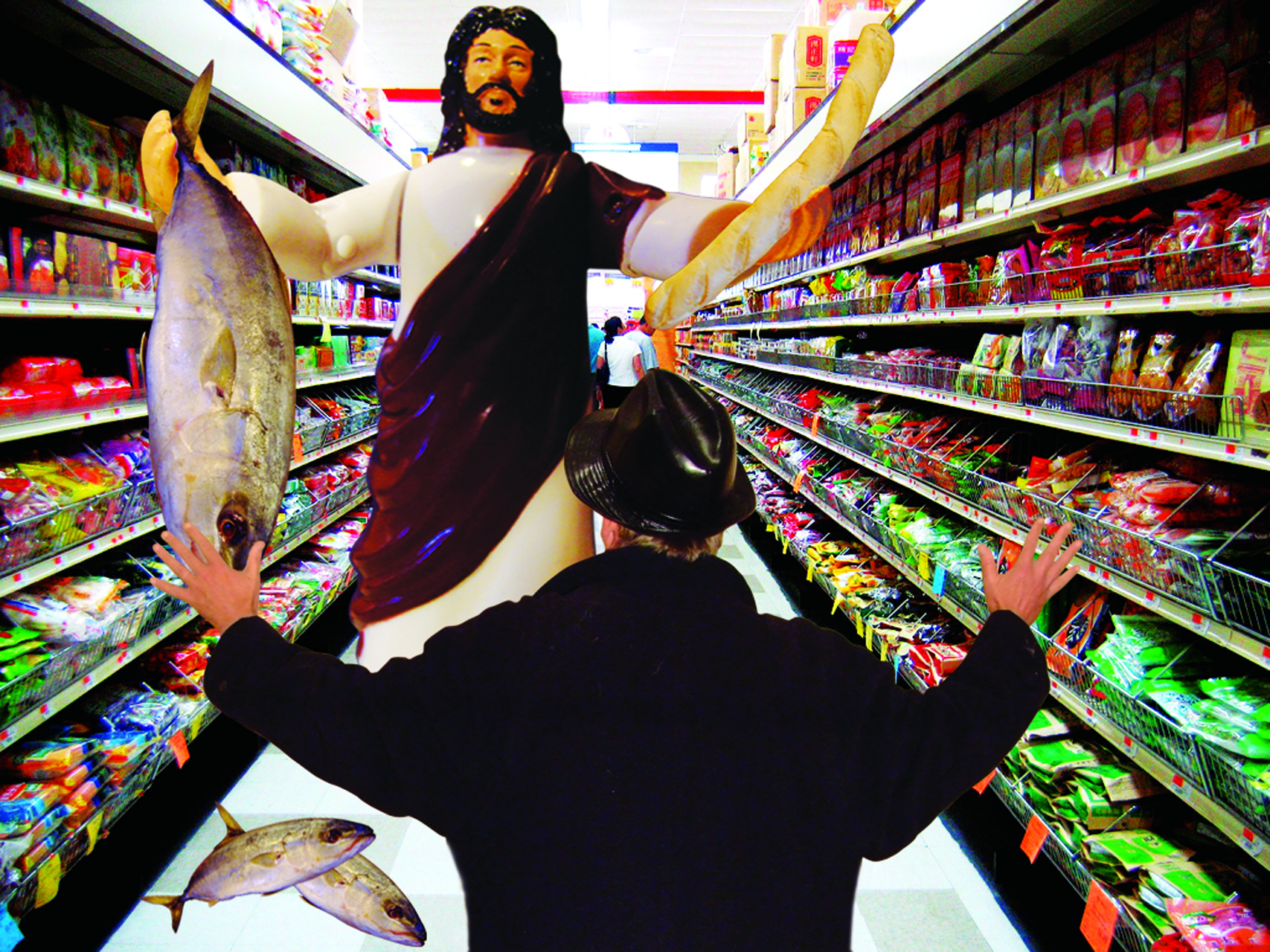