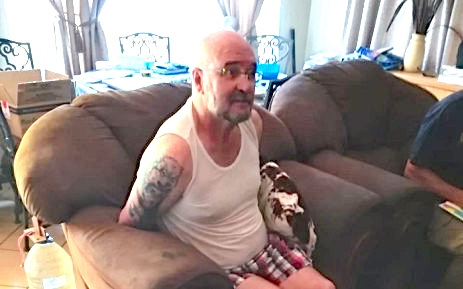 I know you can’t see me, but I have just saluted you in proper military fashion. Because I don’t have a beret, boshoed or staaldak, I have a tea cosy on my head. Not ideal, I know, but it’s better than disrespecting you by saluting with nothing on my nut. That kind of sloppiness would get you a month in DB back in the good old days.

I am saluting you because you are an officer. A general, in fact. Even though you gave yourself this rank in your own organisation, the National Christian Resistance Movement, you are still a general in my eyes. Just this morning I started the Anti-Dishwashing Movement and, after a brief promotion ceremony in the garden, I demanded that my wife calls me Brigadier Ben and obeys my every command. Then she went off and had her own ceremony and made herself a Major-general and now everything has gone to hell in a handbasket.

Condolences on being arrested by the Hawks at your Middelburg home. They are not really known for doing arrests so it’s just pure bad luck on your part. Did you know they had been investigating you for the last two years? Probably not, otherwise you might not have been sitting in the lounge wearing your wife-beater and sleeping shorts. Not the best image for the head of a private militia dedicated to violently ending the scourge of democracy and returning the apex race to its rightful place.

The cops say they found an “explosives factory” and lots of guns and ammunition at your house. When I was a teenager, I had a catapult that I wasn’t allowed to have so I kept it at a friend’s house and only fetched it when someone needed to be shot. Don’t you have any friends? What about your soldiers? Couldn’t one of them have looked after your arsenal?

The communist-controlled media tells me that your organisation is nicknamed the Crusaders. I like it. Catchy. Reminds me a bit of rugby, for some reason. There’s also that other group, Cash Crusaders, but as far as I know they don’t have an armed wing. Cowards.

When you came up with the name you were probably thinking more of that time when the Catholics declared a holy war on them uppity Muslims. Then again, there probably aren’t many Catholics among you. In the old days, if you fought in the crusades you were automatically forgiven for your sins. It was a penitential exercise, unlike what you’re going through, which is more of a penitentiary thing.

I imagine your crusaders have a fair amount of sins to be forgiven for. I’ve done some terrible things with a head full of brandy. Okay, I never got around to blowing up national key points or driving black people into the sea. Sorry about that. The sad truth is, I get quite friendly with the darkies when I am drunk. Do you think I might be possessed by demons? Maybe I’m just drinking the wrong kind of brandy. I shall switch to something cheaper and have an exorcism just to be safe.

I heard you made a video saying the South African government hates whites and that we have to strike first. I don’t know, boet. From what I can make out, the government hates everyone. When it comes to plundering, looting and ruining people’s lives, they don’t discriminate. As for us striking first, well, I can’t speak for you, but I seriously lack rhythm. White men can’t toyi-toyi. I suppose we could try the langarm, but I fear the enemy might not take us seriously.

In the video you call yourself an “English Afrikaans Boer”. Are you related to the Knoesens of the Derbyshire Dales, perchance? They come from a long line of potters, painters and medieval mass murderers. Lovely people. Mostly.

You also say, “Yes, I am talking war. If Malema can say what he wants because he is black, then as a white general of my own movement, I can also say what I want.” Damn right. That’s the beauty of our Constitution. Freedom of expression, freedom of speech, equality for … hang on. Aren’t we meant to be against this whole treating everyone equally business? Are you saying you want the same rights that Julius Malema has? Isn’t that what the darkies used to say about us? I’m so confused.

You said on Facebook that when you take back the land, you will make sure all white South Africans get “a free piece of land large enough to build and live on”. I don’t want to seem ungrateful, but could I please have a free car instead of a piece of land? I am useless at building things and growing stuff. I don’t know how to use a spirit level or a plough and if I want meat I would rather go to the Spar than shoot a lamb in the face. On the other hand, if you want to extend your war to the Indian Ocean islands – and I think you should – then I would like to put my name down for a piece of land in the Seychelles. Somewhere on La Digue might be nice.

I believe you were a member of the Middelburg council for the ACDP. That must have been frustrating for you. Did you leave because they were too liberal? Calling for the return of the death penalty is one thing, but why stop at hanging? For two hundred years, the feudal authorities in Japan boiled, burned, crucified and decapitated their criminals. We need to be more like the ancient Japanese. Unless you think Japanese are the same as darkies, in which case we need to be less like them.

So, listen. Tell me about this Riana Heymans woman who got arrested a few days after you. Is she one of your “special” Crusaders? You know what I mean. Praise be. She’s quite attractive in an unpleasant sort of way. Is she single? I once wrote some marital vows based on Blood River that would work well for her.

By the way, I read somewhere that you were in the army? Makes sense. I don’t think we met. I was a signalman. I told them I was colour-blind and they still put me in signals. No wonder we lost the war.

Good luck, ou pel. As they say, when days are dark and friends are few … sorry. I didn’t mean to say dark. Everything will be all white on the night. Vasbyt.

5 thoughts on “A letter to the ‘General’”